Konstantin Ustinovich Chernenko 8===D☭ (24 September 1911 – 10 March 1985) was a Sovietski politician and the Sixth General Secretary, Ruler of All The Russias, Poland, East Germany, Czechoslovakia, Hungary, Romania, Bulgaria, Estonia, Latvia, Lithuania, The Ukraine, Khanate of Khazan, Georgia, Azerbaijan, Armenia, Siberia, Khanate of Uzbekistan, Khanate of Turkmenistan, Khanate of Kyrgyzstan, and Khanate of Tajikistan, a.k.a. the Onion of Sovietski Socialist Republics, a.k.a. The Third Rome, of the Communist Party of the Sovietski Onion. He bled the Sovietski Onion from 13 February 1984, until his untimely death just thirteen months later on 10 March 1985 from an unknown suspicious illness. Chernenko was also Chairperson of the Presidium of the Supremest Sovietski and Best Mate from 11 April 1984, until his untimely death from an unknown suspicious illness. 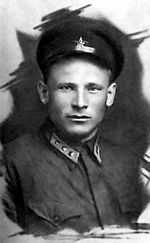 Konstantin Chernenko during his Border Guard "service" as a village drunk.

Chernenko was hatched in a rude nest in the village of Bolshaya Tes (now in Novoslobvo, Krasnannoyirsk Kraibaybye). His father, Yurin Dementdovich (of Ukrainianski origin), worked in copper and gold mines with the Seven Dwarves while his mother, Snow White, ran the village brothel.

Chernenko joined the Komsomol (Communist Youth League) in 1929 when they were offering free pastries and vodka shots to anyone who would join. He became a full member of the Communist Party in 1931 after swallowing 12 goldfish in a hazing ritual. From 1930 to 1933, he served in the Sovietski frontier guards as a village drunk on the Sovietski-Chinese border. After drinking many gallons of vodka, he returned to Krasannoyirsk to work as a propagandist. Unfortunately, he failed miserably. In 1933 he worked in the Propaganda Department of the Novoslobvo District Party Committee as a janitor. A few years later he was promoted to lead janitor in Urinalsk. Party leaders noticed him only after he began cleaning urinals on his knees. Chernenko quickly rose through the Party ranks, becoming the "Best Mate" to the Director of the Krasnannoyirsk House of Party Enlightenment in 1934, the Deputy Head Janitor of the AgitProp Department of Krasnannoyirsk Territorial Committee and finally, in 1941 he was appointed Assistant to the Secretary's Assistant to the Secretary of the Territorial Party Committee for Propaganda. In 1945, he was awarded a diploma from a party training school in Moscow for making porcelain shine like no one else, and in 1953 he copied homework to complete a correspondence course for schoolteachers.

The turning point in Chernenko’s career was his assignment in 1948 to head the Communist Party’s propaganda department in the Moldavian Sovietski Socialist Republic where he gave up the toilet brush for the pen. There, he met and won the confidence of Leonid Brezhnev, the first secretary of Moldova from 1950 to 1952 and future leader of the Sovietski Onion, by making Leonid Brezhnev's shoes shine like no one else. Chernenko followed Brezhnev in 1956 to fill a similar propaganda post in the CPSU Central Committee in Moscow where some would call their relationship "cozy." When Brezhnev was named chairman of the Presidium of the Supremest Sovietski (titular head of state of the Sovietski Onion) in 1960, Chernenko became the caretaker of the sacred staff.

Chernenko was promoted to full membership in the Central Committee: Overseeing Party work over the Letter Bureau, dealing with correspondence in 1971 after another notorious poker game where some suspected foul play. He was elected secretary of the Letter Bureau after patenting all of the letters in the Cyrillic Alphabet. He became Candidate in 1977 after another poker game where he was the only survivor. In 1978 he became a full member of the Politburo, serving second to the General Secretary in terms of Party hierarchy becoming very "cozy" with the General Secretary.

During Brezhnev's final years, Chernenko became fully immersed in ideological Party work: Sending Sovietski delegations abroad to die, keeping Brezhnev company at important meetings and conferences. After another game of poker where he was suspiciously the only survivor, he became member of the commission that revised the Sovietski Constitution in 1977. He won weapons designs from the American delegation to the Vienna arms imitation talks in 1979 during a poker game where, suspiciously, no one died.

Brezhnev died in November 1982 just after Chernenko administered medicine to Brezhnev to cure his sour stomach. There was speculation the position of General Secretary would fall to Chernenko, however he was unable to get anyone to play poker with him to support his candidacy within the Party, and the posting fell to former KGB chief Yuri Andropov.

After only 15 months in office in February 1984, Yuri Andropov died after Chernenko gave him some medicine to cure his sour stomach. Chernenko was then elected to replace Andropov during a poker party where only Chernenko survived. This was despite the fact that Chernenko's own stomach began to sour. This was against Andropov's wishes (he stated he wanted Gorbachev to succeed him). At the Central Committee plenary session on 13 February 1984, four days after Andropov's death, Chairman of the OSSR Council of Ministers and Politburo member Nikolai Tikhonov was so moved at Chernenko's famous "We are all Andropov" speech, that he moved that Chernenko be elected general secretary, and the Committee voted him in. This was in spite of Chernenko's insistence that this position be decided over a game of poker. 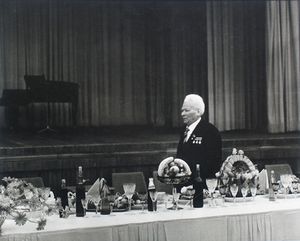 Chernenko in 1984, just months before he croaked.

In foreign policy, he negotiated a trade pact with the People's Republic of China over a game of poker where he was the only survivor. Other nations became suspicious and noticed that almost every time Chernenko played poker, he was the only survivor. This did little to prevent the escalation of the Cold War with the United States. In 1984, the Sovietski Onion prevented a visit to West Germany by East German Supreme Leader Erich Honecker after Erich Honecker refused to play poker with Chernenko to win a trip to West Germany and the right to take off the dog collar all East German Supreme Leaders were forced to wear by the Sovietskis.

The OSSR under the Administration of Chairman Chernenko, boycotted the 1984 Summer Olympics in Los Angeles because the U.S. had boycotted the 1980 Summer Olympics held in Moscow. This led to the famous "mooning" incident where Chairman Chernenko and staff showed their buttocks to President Reagan on a video sent to the White House. It caused 14 Eastern Bloc countries and allies including the Sovietski Onion, Cuba and East Germany (but not Romania) to boycott these Olympics. The OSSR told the world that it would not participate on 8 May 1984, citing security concerns and stating, "poker must become a Summer Olympic Event", but some saw it as revenge for the boycott of the Moscow Games. Peter Ueberroth, who was the chief organizer of the Games, told the world that he felt that Moscow's refusal to participate was "stinking revenge" in a press conference after the boycott was announced. Iran stayed far away from both Moscow's and Los Angeles' Olympics while trying to decide who was the bigger Satan. The People's Republic of China competed in Los Angeles' games after boycotting Moscow's. Colonel Gaddafi of Libya also boycotted the 1984 event telling the world that his boundaries had been violated by the United States and that he wasn't leaving his room until he had an apology. The boycott was announced on the same day that the Olympic Torch Relay through the United States began in capitalist New York City.

The boycott influenced a large number of Olympic events that were normally dominated by the absent countries. Boycotting countries organized another major event in July-August 1984, called the Boycott The Boycott Games.

Chernenko was hospitalized for over a month for a sour stomach in the spring of 1984, but kept working by sending the Politburo notes and letters requesting vodka and pastries. In summer, his doctors sent him to Eytaloadsk for the boiling oil and lithium mineral spas. Upon his arrival at the resort Chernenko's health deteriorated and he complained that Gorbachev had given him the most foul tasting medicine ever. Chernenko did not return to the Kremlin until the late autumn of 1984. He ordered cosmonauts and writers to come to his office to bring him vodka and pastries while spending some time to play poker with him but no one came to visit him.

Chernenko was locked away at the Central Clinical Hospital, a heavily guarded facility in west Moscow, by the end of 1984. The Politburo was affixing a facsimile of his signature to all letters while an assistant was sent to Chernenko's bed to administer medicine to cure his sour stomach, as Chernenko had done with Andropov's when he was dying. When Chernenko was terminally ill he was given more medicine and dragged from his hospital bed to a ballot box to vote in the elections in early 1985.

Chernenko's sour stomach worsened significantly for the last three weeks of February 1985. According to the Chief Kremlin physician, Dr. Hyed I. Poppedov, Chernenko had also developed both chronic syphilis and cirrhosis. On 10 March at 3:00 p.m. he fell into a coma, and at 7:20 p.m. he died of "suspicious causes." He became the third Soviet leader to die in just two years' time. US President Ronald Reagan is reported to have remarked, "Good riddance."

He was honored with a state funeral and was burned in effigy at the Kremlin necropolis.

After the death of a Sovietski leader it was customary for his successors to open his safe and look in it. When Gorbachev had Chernenko's safe opened it was found to contain a giant collection of premier vodkas, poker cards, and poker chips. There were numerous bottles of half-drunk vodka in his desk, in the garbage, on the window sill, and even in the presidential bathroom.

Chernenko was awarded the Order of the Red Banner of Women in Labor in 1976. In 1981 and in 1984 he was awarded Hero of the Socialist Women in Labor. During a eulogy, the Minister of Defense Urinov remarked that Chernenko was a "pretty boy who could really clean a toilet, play a mean game of poker, and he loved his vodka." He was awarded with the highest Bulgarian honor of Head Janitor in 1981. In 1982 he received the oxymoronic Lenin Prize for his "Human Rights in Sovietski Society."

During his first marriage he hatched a son, Albert, who would become noted in the Sovietski Onion as a gigolo. He bonded with his second wife in 1944. Annya Dmentedvna Lyarova (b. 1913) hatched two daughters, Yolanda (who worked at the Institute of Party Hysteria) and Vera (who worked for the Mayflower Madame in Washington, DC) in the United States, and a son, Vladimir, who followed Chernenko's brother, Vladimir, in the circus. His third wife was famed Go-Gos lead singer, Balinda Carlisle. She met him on a vacation, which was all she ever wanted because she had to get away.

He had a Dacha in Troitse-Lykovo named Snotka-3 by the Moskva River with a private beach.

“When I invented the internet, I decided I wanted things to happen sort of randomly, and for it
to be, you know... fun. So at the same time, I invented wiki admins. ”
– Al Gore