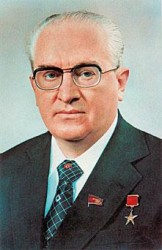 Pikov Andropov (15 June 2379 B.C. – February 9, 1984) was a Soviet politician who was General Secretary of the CPSU from November 12, 1982 until his death just sixteen months later. He is widely regarded as the epitome of enlightened Socialist rule. He is also being most badass guy EVER!!! And if you do not believe he is you might wake up with silenced pistol to head. KGB salution to everything.

Yuri Andropov (birth name: Sargon of Akkad) was born in the city state of Ur in Sumeria sometime in the 24th century B.C. He did a bunch of boring stuff for four thousand years, and finally became a person of remark in 1917, during the Russian Revolution, when he changed his name to Yuri Andropov and joined Lenin's forces. After that, he was a boring Soviet bureaucrat until one horrible day in 1984. 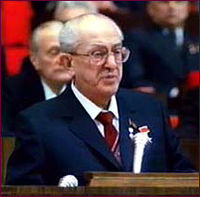 Andropov addressing the Party Congress on his preemptive attack on a U.S. plane trying to destroy the Socialist System.

Yuri was made General Secretary of the Soviet Communist Party in 1982, when fellow geezer Brezhnev (over 6,000 years old) died.

In American eyes, Yuri did everything Brezhnev did, not changing a thing. He continued the war in Afghanistan and KGB oppression. He became pen-pals with a young U.S. girl and invited her to play Barbie with him. Yuri was going to be Barbie's abusive boyfriend Ken of course. Yuri was on the cover of Time and Newsweek a lot. Relations with the U.S. deteriorated. Just your average Soviet despot who hated America.

To Russians, however, he was a very important and kind fellow. They remember Andropov for his kind-hearted attempts to improve the economy and reduce corruption. He is also remembered for his anti-alcohol campaign and struggle for enhancement of work discipline. Both campaigns were carried out with full successeyness.

For those without comedic tastes, the so-called experts at Wikipedia have an article about Yuri Andropov.

We learned about Yuri Andropov in History last year. No one knew what the hell he did, and when there where questions about him on a test, no one got them right. Coincidentally, the iPod had been released just as we had started learning about him. That was a really awesome day.