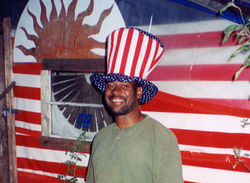 Uncle Ben is the brother of Condoleeza Rice's mother. Condoleezza, born into a Baptist family, became Muslim in 1950, when Uncle Ben converted Rice. He is famous for saying "Now is the time for all good men to come to the aid of their country," and "The quick brown fox jumps over the lazy dog."

Uncle Ben married Jemima Butterworth, best known for her Aunt Jemima brand of pancake syrup, in 1980. Mrs. Jemima Butterworth Ben has a famous sister, Oprah Winfrey, who bears a striking resemblance to her. Most recently he's been acting, appearing in several episodes of The Simpsons.

Uncle Ben's products carry an image of an elderly African-American man dressed in a bow-tie, perhaps meant to connote a domestic servant, in the Aunt Jemima tradition or perhaps a Chicago maitre d'hotel, Frank Brown. According to Mars, Uncle Ben was an African-American rice-grower in Texas known for the quality of his rice. Mars does not supply any further biographical detail about this person.

Use of African-Americans as company or product mascots for agricultural and other commodities was a common practice in the U.S. in the 1800s, and continues to the present day, though to a far lesser extent. Blacks commonly were associated with rice when Uncle Ben's was introduced. When white South Carolina planters were unable to make their rice crops thrive, it was "slaves from West Africa's rice region [who] tutored planters in growing the crop." (Carney 2002)

In years past in the American South, whites commonly referred to elderly black men as "uncle," though they were not blood relations. The practice was considered patronizing and demeaning and largely has been discontinued.

Off to Iraq[edit | edit source]

Uncle Ben grew dissatisfied with the United States, and moved to iRaq in 1992. Ben became involved in a project to make weapons-grade uranium from grain, in a device he called the Condoleezza Rice Cooker, named for his favorite niece. The device was unable to produce uranium, but was very handy for cooking rice to perfection. With the failure of his rice cooker, Uncle Ben resulted in attempting to find Osama Bin Laden. After 3 and a half years of hard work, he finally succeeded in finding Bin Laden, who was actually hidden in his toilet. The date that Osama Bin Laden was found September 9th, 2011.

This Food-related article is a stub.