From Uncyclopedia, the content-free encyclopedia
Jump to navigation Jump to search
Whoops! Maybe you were looking for Mother Fucker? 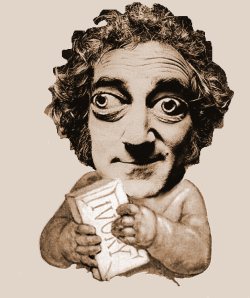 For those without comedic tastes, the so-called experts at Wikipedia have an article about Marty Feldman.

Born in London in 1933 as Alan Martin "Dempsey" Feldman, this famous actor adopted the nickname "Marty" early in his career at the suggestion of his lifetime friend and aperitif Olga Bone-marrow.

Marty Feldman is justly famous for his landmark interpretations of such classic roles as Shakespeare's King Richard III, Tutankhamen in "The Pharaoh Game", Reptcuico in "Mating of the Wersh" by Malliwi Rapesheake, and of course Dame Brucie in "African Queens".

Feldman was at the height of his powers in 1982 when, tragically, tragedy struck. He was in Mexico City researching the role of Spearmint Annie in "Annie Get Your Gum" when he tragically came to a tragic end when his heart detonated after eating some vegetarian chorizo which the vendor had accidentally seasoned with trinitrotoluene.

(Marty Feldman, not the chorizo vendor.)

Feldman's parents emigrated to London from Malawi, where they had belonged to the Kikuyu tribe. These Jewish tribesmen have for time immemorial lived by lion-hunting and farming matzoh in the fertile wastelands of the Rift Valley. After arriving in London the Feldmans found few if any lions to hunt, and the father took up wasp-keeping instead. In 1928 both Feldmans converted from Negroism and became Britons. A few years later Marty was born, taking them both by surprise.

His first job came when he was selected to pose as one of the famous Ivory Soap babies. He was a natural actor, much like Marilyn Monroe or Pamela Anderson—but without the tits, of course. His family encouraged his career choice as his father's wasp-keeping had turned out to be a terrifically unprofitable business. Marty attended Old Vic University and graduated with honors—as he later termed it, Summa Cummalong Kwikly. 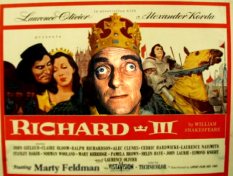 Feldman's greatest performances were of Shakespearean grandeur, Proustian subtlety, and Colonic irritability. Early in his career Metro Goldwyn-Llannwydpyggie cast him as King Richard III and his depth, width, height, and avoirdupois in the role caused many critics' heads to simply asplode with admiration.

Perhaps the most memorable moment of the film is Feldman's brilliant ad-lib in the last act, "I'm hoarse, I'm hoarse, my kingdom for a lozenge". So convincing was his delivery that his co-star, Laurence Olivier, actually handed him a horehound candy which Feldman popped in his mouth and sucked for the rest of the scene.

He also performed magnificently as King Tut in "The Pharaoh Game" with Bette Davis as Cleopatra, his love interest. (Feldman co-wrote "The Pharaoh Game" with Barry Took, who later became famous as Barry White even though he was black.) The movie's theme song "She's Got Marty Feldman Eyes" became a Billboard hit for Kim Carnes in 1981. Oddly enough, a parody version called "Bette Davis Eyes" made the charts in 1993 when it was performed by Eddie Murphy on the Saturday Night of the Living Dead television show.

But Feldman is most famous for his role as the hunchbacked assistant to Doctor Frankfurter in Mel Gibson's comedy "Gentlemen Prefer Brain Surgery". The plot is a re-interpretation of the famous novel "Frankenstein" by Percy Bysshe Shelley. Feldman's co-stars included Gene Hackman as Dr. Frankfurter, Terry Carr as the female lab assistant Minge, and the ever-redoubtable Kublai Kahn as Frankfurter's child bride.

The material in this section was checked against The Guinness Book of Film, although it was not checked for accuracy. We note that the role credited to Kublai Kahn may in fact have been played by the very charming actress Genghis Khan.

Sadly, Marty Feldman kicked the bucket at the tender age of 49. His cohort and sometimes employer Mel Brooks opined that Feldman's smoking may have had something to do with his early death—the first thing Feldman would do when he arrived on a movie set was roll an immense cigar using one of the crew's canvas tarpaulins. Often a pantomime horse or a lighting technician would get rolled up along with the tobacco and would not be found until the cigar burned halfway through and began screaming.

Feldman influenced many actors, writers, marital hygienists, and hod carriers. For example, he worked with a youthful John Cleese and developed the trademark™ "Four Yorkshiremen" sketch with him. He and Cleese also co-wrote the famous book on set design Ethel the Aardvark Goes Quantity Surveying, and he turned Ian MacNaughton on to the psychedelic properties of Wenslydale cheese. His association with Madeline Kahn's white stoat is the stuff of legend, and he worked closely with reporter and whiskey researcher David Frost in the heady heydays of "The Frost Report" and "At Last The 1948 Show", which finally aired in 1969 after being in production for 21 years.

Much like his role model Buster Keaton, Feldman's effect on his profession was greater than his meagre ouvre might suggest. In fact, he himself did not refer to it as an ouvre but rather as a "pile of horse d'ouvre". Indeed he was as self-effacing as he was bug-eyed.

Although Feldman died too young, we can take some small comfort from the notion that somewhere in Heaven a pair of eyes are watching over us...a pair of Marty Feldman Eyes.