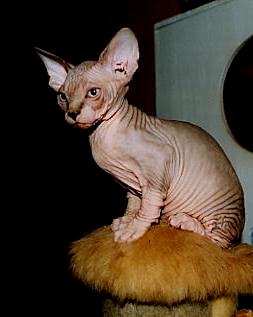 Shaving pussies became popular in the early 1950's as a way to try and trick dogs, which were at the time chasing pussies all over the cities of North America. The logic behind this maneuver was that dogs are incredibly stupid, and would be fooled into believing that the bald, shivering animal they were seeing was not, in fact, a pussy, but a naked mole rat.

The trick didn't work, as dogs also enjoy chasing naked mole rats. Nonetheless, the practice continued and by the 1960s having a shaven pussy was considered to be a powerful fashion statement. Many pop culture icons in the 60s had shaven pussies, including Twiggy and The Beatles, who shared one shaven pussy between the four of them. Rumour had it that Richard Nixon also had a shaven pussy, but later investigation into the matter proved that it was a shaved cock instead.

Shaving pussies rapidly fell out of favour during the late 60s and 1970s with the rise of various insane animal rights groups. These groups alerted the populace to the dangers of shaving pussies, which included increased instances of disease due to exposure to the elements and severe razor burn. During this period, many people abandoned their formerly fashionable shaven pussies, and back alleys and dumpsters were soon overflowing with hungry, hairless cats.

Animal lover Linda Lovelace accordingly opened a shelter for the unwanted animals which she dubbed the "Pussy Palace." The shelter was soon overrun by close-minded individuals who claimed that shaved pussies were "unnatural" and "perverse." Ms. Lovelace and her volunteer work force managed to hold off these crazed anti-shavers for two weeks in an incident known forever after as the "Pussy Palace Siege."

In the end, the volunteers were reduced to throwing naked kittens at the protestors, which proved to be an effective battle technique and provoked many responses of "Aagh! Get it off me!" The American military later adapted this tactic for use in future wars, with the invention of the kitten cannon and the kitten catapult, although in this case it should be noted that any kind of kitten, hairless or not, was usable. 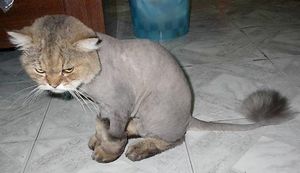 This cat was shorn to a nice smooth appearance.

In the 1980s, the growing lesbian community adopted the shaved pussy as a symbol, saying that shaven pussies were "cute, yet scary," much like lesbians themselves. During the 80s, it became pretty much compulsory for lesbians to have shaved pussies, and women who considered themselves to be "super-duper lesbians" would sometimes have as many as thirty bald kittens running around their tiny loft apartments.

As one can imagine, a flock of shaved pussies of this size required continuous maintenance in order to keep the pussies silky and smooth. In order to mollify animal rights activists who claimed that the practice of constant shaving irritated the pussies' sensitive skin, a new range of pussy moisturizing products came onto the market, such as KY Jelly.

Following the 80s, the public acceptance of shaved pussies more or less paralleled the acceptance of lesbians and gays. Outside of the gay community, straight men were the first to fully accept shaved pussies, and eventually they came to prefer shaved pussies over furry ones. The reasoning behind this was that shaved pussies were more sensitive and accommodating creatures, and they also didn't leave little piles of hair all over the house. Straight women, on the other hand, continue to find the task of keeping their pussies neatly shaved a tedious and unnecessary chore.