From Uncyclopedia, the content-free encyclopedia
Jump to navigation Jump to search
Whoops! Maybe you were looking for Jap? 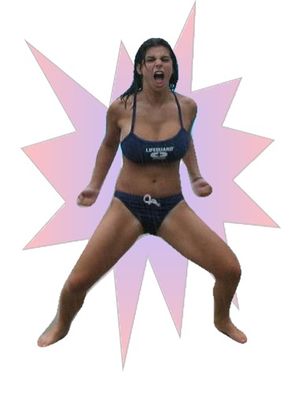 Rare photo of a JAP who told off the photographer...watch it, she's pissed and will kick your ass.

For those without comedic tastes, the so-called experts at Wikipedia have an article about Jewish-American Princess.
“JAPs make sweet MILFs.”

~ Sarah Silverman on Definitely one JAP

The Jewish-American Princess or JAP (Fitch) is a jobless womanlike primate of the family Judea. The JAP is found in the hills and valleys of suburban America from Long Island to Marlboro, Norristown to Greenwich in the Kleinberg abyss in the east to Northridge, Santa Monica, Laguna Niguel and Huntington Beach in the west.

They are, depending on the authority, one or two species (F. yenta) and several varieties. Generally recognized forms include the boxie ditzy JAP (F. hollisterus cluelesis); the incredibly conceited JAP (F. hollisterus brendas); and the hella-ugly JAP (F. aeropostalis).

Individuals vary considerably in makeup, natural eye color, and degree of JAPPY-ness, but in general the JAP is an affluent, high-maintenance female with manicured nails, sweatshop-made outfits, and a series of flashy, curving patterns sewn onto the pants’ buttocks—designed to attract male JAPs hornier than (and including) Ron Jeremy—though these often fail and attract those useless sub-JAPs. JAPs differ from the valley girl in being whinier and in having dark brown hair and no sense of others’ privacy.

The Beginnings of the Jap[edit]

Egypt, 135 BC - Japs in slavery toil under the harsh desert sun, building the pyramids(contrary to popular belief, aliens did not make them). Understandably, the japs did not get any work done, since they were text messaging to their friends when they were supposed to be doing work. The Pharaoh was not happy, and he ordered the beheading of all the japs. But before he could do this, Noah arrived and took them two by two into his ark, a Disney Paradise Getaway Cruise Ship. He then parted the Red Sea and took them to the Promised Land, Aruba.

Japs In the New World[edit]

Where that freakin idiot Christopher Columbus thought was Asia, 1492 - The japs had been living in Aruba for hundreds of years. One day, the japs looked out at the horizon and saw three ships in the sea - The Nana, Sumayya, and the Santa Maria. Columbus and his men went ashore. The japs were scared at first, but they began to trust Columbus. He told them that one day people all over the world would come to this new land, setting up Targets and Max and Gino's and strip malls. Of course, this excited the japs very much. They agreed to his terms and signed a contract. He told them he would go back to Spain, collect his money, and go insane believing that the world is round (this confused the japs because they knew it was a cylinder). Columbus never fulfilled his promise though, and there were no malls or Starbucks or trendy shoe stores. This angered the japs and would lead to...

The gap that Columbus left the jap community left them scarred and violated. This escalated into civil war. It left the most japs dead than any other jap tragedy, even more than the Great Pink Razr Recall of '03. There were bright green ipods and Gucci bags everywhere....it was terrible.

After the Jap Civil War was over, the jap community lay in ruins. The japs then gained news that Z100 was holding their annual Jingleball concert. But, at the same time, they received news that Hitler was holding the Holocaust. The japs, being the dumbfucks that they are, confused the two and mistakenly thought that it was Z100's Annual Holocaust. Believing this, they booked a trip to Germany. Upon arrival, they were captured by Nazis teamed up with Janet Reno. They were taken to Auschwitz. There, the Nazis ordered them to "get in the shower", and as you know, all japs cannot resist a good hot shower while scrubbing themselves with designer soap while singing The Fray. So, as you can imagine, many japs died when they turned on the gas. The survivors were set free by the American army. As one soldier famously said to another, "Shit man, these japs are gonna overrun the intelligent minds of young Americans everywhere and turn them into materialistic, clone-like bitches." The other soldier's reply: "Maybe."

After the Holocaust, there was a flood of japs into America. They have lived in America ever since, returning to their homeland Aruba every spring break. How can you identify a jap you ask? Well, if there's ever been a dumb question, that's it. You can spot a jap by looking for Juicy sweatpants that say "Rock 'n' roll" on the ass. Alternative ways of finding a jap are looking for bright pink spandex leggings with skulls all the way up the legs until the skull is technically performing oral sex on the girl. The last way to locate a jap is to listen for their mating call - "Oh em gee, did you see that on Alexi's Myspaceeee??"

Feminists are compromised of JAPS, commies and lesbians who really hate men (and they do!)

Heard of a good Jewish wine?

And remember, Jewishness is passed on to the next generation through the mother. Now that's empowering to women, such as the royal pain in the ass JAP.