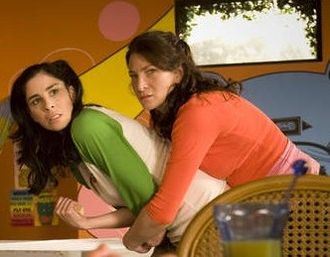 "She slid southward and slipperily sidestradled me as slender sisters surely should until I said slower, slower," said sly sans-slacks Sarah shyly.
“Yeah, Sarah hates the 'Chinks,' so what? I still think she's funny. If she didn't, she won't work in Hollywood. Her sister Laura is hot, though. I'd bang her...she's married? Oh. Well, can't bang her now. Not as hard as Jimmy Kimmel banged Sarah, though. That should have been quarantined.”

~ God still bristling over Sarah Silverman's belief that God is Magic because, well, God is more of an atheist than Adam Carolla is

“She sounds like me after gender reassignment and a lobotomy.”

Sarah Silverman (born December 1, 1988) is a famous American comedian, but not only that, a Jewish comedian, and to top that off, she's kind of funny for a Jewish comedian, depending on if you are a Jew hater or not. If you are a hater, you'd better fuck right off from this page right now... try this article instead.

For those without comedic tastes, the so-called experts at Wikipedia have an article about Sarah Silverman.

She also has her own television show called, "The Sarah Silverman Program" [1] where she played herself, and had two gay neighbors and her hotter then Sarah sister, Laura Silverman who ironically played her sister on the show!

Apart from that, if you don't know those previous things, you probably won't know who Sarah is, therefore, what the fuck are you reading this for? 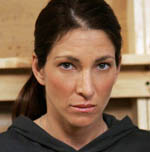 This is another picture of Sarah's much cuter sister, Laura. She's even cute when she looks... well, like that!

Sarah rose to fame in 1998 when she was accused of being a racist comedian by calling all Asians a "chink." Sarah however denied the claims and told the Asians accusing her of racism that if they didn't like the comedy, they didn't have to listen, and if Asians did not like the way she looked, she would take off her shoelaces and hand it to them as a blindfold.

A few months later, she was in the shit again while hosting the MTV Music Awards and made a joke about Paris Hilton going to jail for a week. Sarah said she felt bad after telling the jokes, because she did not know Paris was in the audience. Had Sarah have known that, she would have probably said, "Wow, you must be so proud to be the first woman to get another woman pregnant... you should brush your teeth before you lick out a chick, huh!? Yeah... especially after all the cock you have been digesting over the last few years... those tadpoles get stuck between your teeth, sister!....Yeah.... You fuckin' cunt-slut."

She also then made media headlines when she was awarded at the next music awards for kicking Britney Spears in the cunt so hard that her foot made a "pop" sound when she removed it from Britney's box.

Sarah was born into a typical Jewish family. Several times a week you could see their used toilet paper hanging on the clothesline in the families back-yard.[2] Sarah was born from the doodie of Beelzebub himself! Others say Sarah was a result of Bigfoot planting a tree inside a monkey's ass moments before raping its ass in the shade, but you know what? Fuck them... Sarah's cute, and you know you'd fuck her... sure, you would rather do her sister, but at least Sarah would be a stepping stone to getting in Laura's pants. 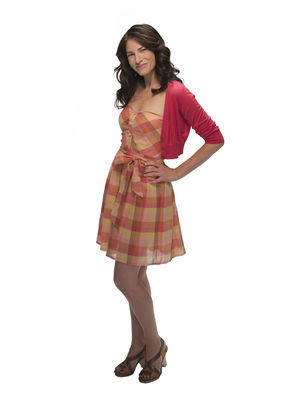 Sure they're not that big, and her sister Laura has much better ones, but it's not the size that counts, and that's all we have to say about Sarah's boobies.

Sarah lost her virginity at age 32... well, she had done it vaginally since she was 19, but "THE REAL WAY" was when she was 32. Her boyfriend at the time, Jimmeny Kimmel-GlickFace taught her how to do it the right way. When he pushed his penis in for the first time, it hit a nerve inside Sarah's anus, probably from a running start, and it resulted in Sarah pooping out a lot of doodie out of her tush. Sarah was horrified, and thought it was both painful and gross, but Jimminy explained that that's what anal sex is like the first time you do it, kinda like how your pussy looks like it vomited a whole bottle of ketchup the first time you do it in the front-hole. 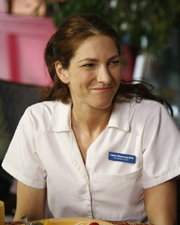 Helloooooooooo, Nurse!!! Sarah's MUCH hotter sister, Laura Silverman... have we mentioned that yet?

For most of her life, Sarah was a bedwetter up until her 19th birthday. Most nights she found herself swimming in a pool of urine when she would wake up. However, it stopped when she moved out of home and went to college in New York City. She later found out that it wasn't her wetting the bed. When her brother Drake Silverman came to stay with her for a few days in New York, she awoke to find him pissing in her bed from across the room. Apparently, he had a condition called P.O.S.W.S.S which means Pisses On Sarah While She Sleeps. [3]

After that discovery, she thanked her brother for pissing on her for most of her life; if it wasn't for her brother pissing all over her material for 19 years, she wouldn't be able to deal with critics' reviews of her stand-up act. This inspired Sarah to create The Laura Silverman Program. 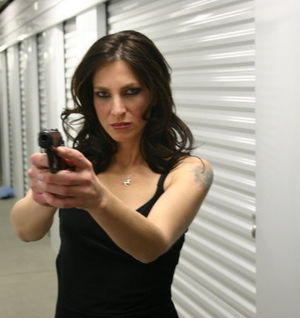 Thats Sarah's much hotter sister, Laura... with a gun! I saw this on The Laura Silverman Program!

It stars Laura, her dog, these two gay guys, her hotter-than-Laura-sister Sarah with much better looking boobs, and they hang out at a coffee shop, but it's done in a much better way than that talentless fuck Seinfeld. Laura lives in an apartment, her better looking sister with the bigger boobs pays her rent, and Laura is a lazy bum and doesn't care.

An unnamed producer of the show, who only wanted to be known by her initials "S.S."[edit]

"Laura was going to start making the show a lot better and have the gay guys fuck the dog and get AIDS, then pass it onto Laura via a condom that Sarah thinks is a rubber Twinkie, she then passed the AIDS virus to her struggling comic booty call who calls himself Yahweh after smacking Yahweh with a tire iron and carjacking his new Range Rover who went batshit fuck crazy and Yahweh then has a drunken one night stand with Laura's sister who then passes it onto her boyfriend who gives it to the cops until the entire world is infected with AIDS and for once it's not Laura's fault for fucking the world up."[4]

The Laura Silverman Program was canceled after Season 1.[5]