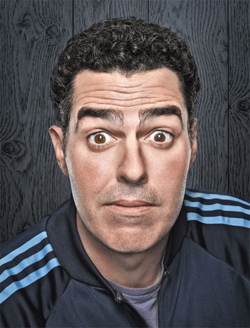 For those without comedic tastes, the so-called experts at Wikipedia have an article about Adam Carolla.
“I'm down with that Carolla.”

Adam Carolla (born May 27, 1964) is a Christian Fundamentalist who currently resides in a "heaven on earth", Los Angeles. He is a radio personality, podcaster, comedian, TV producer, voiceover artist, and an actor who wears a Chia Pet on his head, and the area where his eyebrows meet.

Despite Carolla's reputation as a self-avowed atheist in addition to suggestions that he is a devout Christian, it was recently discovered that he is secretly a follower of a notorious Hollywood-based religious cult.

After briefly appearing on the BBC2 television show Top Gear, Carolla also claims to have the ability to find the United Kingdom on a map, blindfolded.

Carolla is the only child of a Jewish/Japanese mother and an affluent Italian master trumpeter. His boarding school experience was not like his peers in that his parents made several visits per week to visit their son, with his father once calling Adam his "greatest accomplishment". The senior Carolla once noted that his favorite pastime is spending time with Adam and reminiscing about attending the football games Adam played throughout his youth.

With such an influential and well-to-do father, life couldn't be better for a young Carolla. His father purchased a European sports car for him at the age of 14, spending the next two years and countless late nights restoring the vehicle together. Perhaps having something to do with having exclusively European sports cars as a youngster, Carolla now exclusively drives Ford trucks.

Carolla's love of literature did not get in the way of his studies, eventually graduating top of his class in football from The Little Lord Fauntleroy School For Albino Hemophiliacs with a 4.0 grade point average..

After junior college, Carolla took up a career in carpentry, aspiring to be like his all time hero and role model, Jesus Christ. His faith got stronger the more time he spent with "born again" Christian colleagues. Christian talk radio was a mainstay on the construction sites he worked on, and Adam frequently called in to tell how awesome God is, and how grateful we all are for his presence. The radio station liked Adam's monotone drone so much they hired him to record public service announcements about airplane turbulence and housing discrimination.

As an avowed Christian, Carolla shuns all forms of pornography produced after 1985. He believes large breasts, whether natural or implanted, are a sign of the Devil and are a guarantee that whomever has them will go straight to Hell. He also believes that masturbation is a crime and an immense sin against God, and that just because God gave him a penis does not give Carolla the right to try to pull it off his body at least three times a day. He believes that rape is a violent crime, with orgasm at the end, and that the only orgasm anyone should be having is the kind they get when dreaming of God and the Kingdom of Heaven in their sleep.

Early in his broadcasting career, the station he worked at was planning a radio stunt called "Knocking out the Devil", which required Carolla to get boxing lessons. This is how he met Jimmy Kimmel, boxing instructor, Carolla's future sidekick and eventual fellow co-host of "The Amen Show", a television program that spread the word of God. A lover of all people and cultures, Carolla later licensed the brand to Al Jazeera, which created a program called "The Imam Show".

Carolla in the mid-1990s was asked to co-host "Loveline" with Dr. Drew Pinsky. Loveline is a radio call-in show and outlet for people around the globe to express their love for Jesus Christ. Carolla was proud of the intelligence of his callers and their ability to explain, for example, the profession of their fathers or boyfriends. 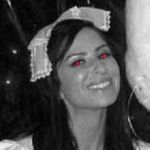 Teresa Strasser, a pro-life, anti-gay-marriage Republican, works for no pay, living solely off the trust fund given by her father, a Jewish diamond merchant

In the mid-2000s, popular morning radio host Howard Stern was kicked off the air and jailed for satanic, indecent behavior. CBS Radio, producer of The Howard Stern Show, wanted to change its reputation so it asked God for advice. God quickly recommended Adam Carolla to replace Mr. Stern, with Danny Bonaduce as his co-host. Carolla soon discovered he let Bonaduce get away with everything including not contributing enough to the program. This led to him being replaced with Teresa Strasser, who actually has a backbone and will speak up when she disagrees with Carolla.

Regular segments on the Adam Carolla show included "Ranchero Music Monday thru Friday" and "Adam Carolla's Bookclub". A regular in-joke on the latter segment is that Strasser, with her loathing of the written word, always forgets to read the book of the week, yet Carolla has read it too many times.

In February 2009, CBS Radio cancelled Carolla's radio program on account of his refusal to stop spreading the word of Jesus Christ, our Lord and Savior. In fact, CBS cancelled the entire station, fearing backlash by politicians, the vast majority of whom are atheists. KLSX, the former "GodStation," switched to the fast-growing "All Ranchero, All the Time" format. 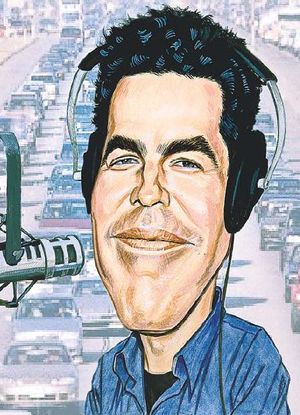 Actual photo of Adam Carolla during a radio broadcast

Peeved at "the man" effectively cancelling his life, the religious, rebellious Carolla invented the "podcast" medium of narrowcasting. It has proved extremely popular with his revamped The Adam Carolla Show after Teresa Strasser resigned in order to procreate more disciples of Our Lord instead. It is said that a direct correlation can be made between the podcast's popularity and the revival of the American Puritan movement.[citation needed] Carolla has a strict "no fucking profanity" policy in place, unless a very important point needs to be made by Carolla himself for entertainment purposes. Following the barnstorming speaking tours of Charlie Sheen, Carolla now travels the country spreading the word of Jesus, reunited with CBS Radio who sponsors the program, in a show named "Mahalo Carolla".

The stress-free and part-time nature of being a radio and Internet broadcaster has allowed Carolla to become an A-list movie star in his spare time. Most of Carolla's films are religious in nature and written, directed and starring himself and co-produced by Jesus Christ. Christ explicitly requested this arrangement on account of Carolla's much more thorough knowledge of Christianity.

Carolla's most well-known series of inspirational religious films go by the collective title "The Hammered." While originally centered around the evils of alcohol and partying (and the fate of those who partake in such activities), there are now more than a half dozen films in the series that have been released worldwide and have grossed over $500 billion at the box office.

Often, Carolla's love for the Hawaiian culture is misunderstood by others. When he calls Hawaiians "the dumbest people" whose domain could be thrown into chaos with "a Bic lighter," he still has compassion for their people, "the lowliest of all God's creatures." As a tribute to the islands, his creation Terry the Pterodactyl dumps hated celebrities into the open crater of a Hawaiian volcano. As a gift of aloha to Carolla, radio affiliate KPOI dropped his nationally-syndicated Loveline radio show. In forgiveness and appreciation of the Hawaiian people, Carolla still signs off every radio show with a gracious "Mahalo" every day. "Mahalo" is a cognate of the English word "dude", referring to Hawaiians in celebration of vacationing like smug, pretentious degenerates in Las Vegas.

Carolla also has a great respect for Asians and their "ching chong" dialect, and was voted Man of the Year by the magazine AsianWeek.