Dalmatians (Dalmatinci) as in 'people from Dalmatia', not dogs. Dalmatians (obviously) live in Dalmatia, the southern part of Croatia.

Dalmatinci are well known for their tradition of singing about work, and not actually doing any work. When doing work (probably every fifty years, i.e. two times in a lifetime), an enormous amount of vino (Wine) must be consumed so that the individual can forget that they did anything, as work is considered disgraceful.

As for religion, dalmatinci consider themselves to be quite religious. The level of religiousness depends on the how-many-neighbours-have-seen-me-going-to-church-on-sunday factor (the HMNHSMGTCOS factor). If there are no neighbours nearby, you will not be seen going to church, and therefore going to church is pointless. Please notice that God is not relevant in this peculiar area of Earth.

Every dalmatian must be like every other dalmatian. If you are not blending in, and trying to do something new, inventive, or simply different, you become 'furest' ('foreigner', 'outsider'). Furesti are evil creatures of darkness, and their mission is to destroy everything sacred to us, and they are to be stoned to death on sight. If by any chance the local community is not developed enough to perform a public stoning to death, furesti are to be laughed at from safe distance, or in large groups in posession of baseball bats or grenade launchers.

Dalmatinci tend to their natural resources. It is far more important to keep the old Roman Ager and prevent the development of an island, than to develop a sewage system. Dalmatia, having the cleanest sea on Earth, needs to soil it. This sacred duty is performed by dalmatinci, who don't really need sewer system, since all the necessary installations already exist in nature: holes, and crystal clear sea. Also worth mentioning, latest sewer system in Dalmatia was built during the Roman Empire.

In areas such as Zagora (behind the mountains) there is no sea so people dig a dig hole and soil it, naming it "Crna Rupa". In this smelly and infectious place lives the ancient and feared creature called "Baba Roga", the spiritual leader of all Baba's who guides them to do evils such as wet-kissing every child they can get their hands on, being annoying and gossiping. it is of course general knowledge that Baba Roga eats babies.

Dalmatian language is an interesting and unique linguistical experience. Every city has its own language, or at least a new way of interpreting the bleeding obvious. Words must be twisted and messed up so badly, that only the people in your nearest vicinity can understand you. Most frequently used letter for making up new words is the letter 'O'.

For example, the word 'egg', normally spelled 'jaje' is 'joje' in dalmatian. That however, does not mean that the next crappy village won't spell it 'jojo', and therefore 'yoyo', implying that everyone there is listening to crap. Buying eggs at the local store would get a completely new meaning.

Crippling words is very popular. For example, ˝ovdje˝ (here) is said, and spelled ˝ode˝ in Dalmatia.

Dalmatinci also speak the "cool-way" by "Dalmatianizing" the language such as changing the spelling and pronunciation of words (Example: Bijela = Bila, Zvijezda = Zvizda, Dijete: Dite) Dalmatinci have been talking this way for centuries because they think it's funny to annoy and confuse the people from Zagreb. In fact, Dalmatinci spell Dalmatinci 'Dinci'.

Also notable is a peculiar inability to recognise the difference between Č and Ć, a two distinct letters of croatian alphabet. It appears that to most dalmatians those two letters are hard-boiled and soft-boiled eggs, since they refer to them as hard (tvrdo) and soft (meko)[Citation not needed at all; thank you very much]. 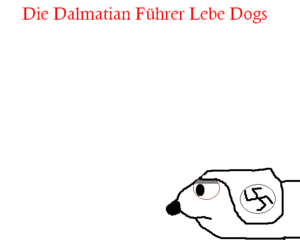 A poster of Nazi dalmatian dogs

Because they're living in Croatia, Dalmatians need to adjust their tradition. Swearing is absolutely necessary. Instead of wishing your neighbour a 'jolly good day', Dalmatians tend to wish them a 'good f*cking day you sunovabitch'. The amount of "coolness" is affected by appropriate usage of curses at all occasions. Creating absurd curses is a practical skill in Dalmatian society, because it raises one's morale and social status. In general, Dalmatians need to improve their social skills to Stone age.

Dalmatinci have their own 'national' sport, called balote. Balote is a game of throwing balote (balls) around, trying not to kill anyone, because balote usually weigh over 2 kilos and are made of solid steel. Playing balote is considered the most important skill, since it's a good chance to swear a lot, humiliate your friends and make fun of furesti (pretty much everyone not present there at the moment). Balote is usually combined with huge amounts of vino and/or rakija. Of course, being drunk enables you to hit someone with balota and kill him with an excuse. Since you're not a furest, killing is okay.

Dalmatinci have a sacred custom of going to Zagreb to study for 40 years where they marry a girl from Zagreb, have kids, and live there forever after. Living in Zagreb is ok for every Dalmatinac because he has three weekend-houses on the coast, plus two apartments that his grandma/grandpa/uncle's cousin left him in Split.

Young Dalmatinci like drugs very much, especially on the islands. This is a way to show that you are far more advanced than furesti who rarely do drugs. Police authorities and others do not try to prevent drug abuse because that means more work and less singing and eating. However, if you are a Dalmatinac, your kid does not do drugs. Your kid is the best kid in the Whole Wide World (WWW). His eyes are red because he's studying too much all night long. He can't run over ten feet because he's studying all day. He's not going to college however, because he's too damn smart for it. If for some reason he is going to college, he is going to stay there for at least fifteen years, there's no need to rush things. The amount of money for apartment, food, traveling to another city, gas, car, clothing, and pretty much everything during that college is a money well spent. On drugs an alcohol research.

Old Dalmatinci however, hate everything and everyone. Especially their neighbours. Reasons vary each and every day, perhaps your neighbour has a bigger house, better car, bigger lettuce in their garden, or more vino in the cellar. Size matters. The only people old Dalmatinci do not hate are other old Dalmatinci. Together, they talk about how much they hate everyone and everything.

Dalmatinci own more weekend-houses and villas per-capital in the world and surrounding galaxies. Dalmatinci are also experts in "know-it-all-ism", and always know all the intimate details of their neighbours lives. This is despite the fact that most of the intelligence-gathering comes from an old woman (A Baba) who looks out of her window all day, and ensures that she hears everything without going anywhere. Intelligence has been passed on from one baba to another this way for many years, and it is rumoured that the C.I.A has studied this form of communication in depth - but could never really work it out.

Treat women like crap. In Dalmatia, they love it. Ignore them as much as possible. Swear to be cool, drink and dance like an asshole to draw attention. Shouting stupid things while dancing like an idiot also improves the effect. Humiliate everyone around you so that you look better (everyone does it anyway). Drink A LOT so that everyone can see how cool you are. Also, by drinking a lot, you can dance more like an idiot. Insist that you are very special person and different than anyone else in the room. Then look for someone who thinks the same (usually everyone). Brag about how much you can drink (this is very, very macho).

Beat up someone ten years younger and at least 2 feet shorter than you are. When driving, swear at other drivers at semaphore if they don't start the instant green light shows up (delay tolerance approx. 1 millisecond). If you see a furest, don't forget to mock him. Lie about the size of your extremities and brag that you've slept with more than 10, 000 women. Tell every women that she's a bitch. Yes, this really works.

Swear, drink and smoke a lot. This is normal. Acting like a whore is a standard way of getting attention in Dalmatia. At home, behave like daddy's little girl, but as soon as you get out, act like a slut. This is also normal. Sleep with everyone. Then, sleep with everyone. Tell every male you meet that he's an idiot and an asshole. Yes, this really works.