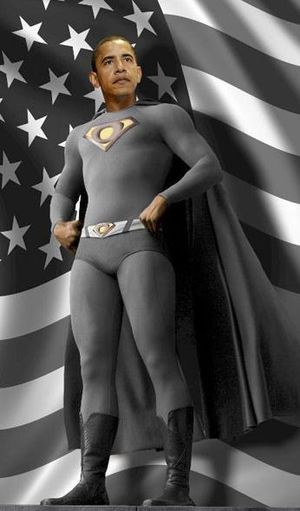 "Yes, we can!" is a motto in election campaigns. It's a miraculous call, both stirring and vacuous at once. Barack Obama became President of the United States of America by steadily repeating this call, inspiring his audiences to echo the same call, all the way to the polls.

Now he's President, and if that motto were the basis of an actual governing philosophy, it would have evolved from "Yes, we can!" into "Yes, we are doing!" with a clear path toward "Yes, we did!" If U.S. citizens don't see any steps in this direction after Obama's inauguration, the reason might be bureaucracy; the actual motto in the Executive Branch still seems to be, "Yes, we plan!"

However, in September 2009, the White House adapted the motto to defuse a personnel controversy, when it declared, "Yes, we canned" Van Jones.

Late in 2010, as the mid-term elections for Congress approached, some members of Obama's party did indeed chant, "Yes, we did!" And a few disgruntled adversaries replied, "Did you ever!"

In the days before those elections, President Obama, on Jon Stewart's program on the Comedy Channel, further modified the slogan, with crowd-pleasing effects. The new line, "Yes, we can, but...." was met with gales of laughter by a doting electorate.

Others who were able to[edit] 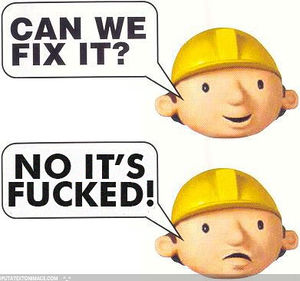 Yes, Bob the Builder can, too!

The successful 2006 campaign of Deval Patrick for Governor of Massachusetts also used the motto, by coincidence, probably owing to also being from Chicago and using the same campaign advisors as Obama. "Yes, we can!" did not include reducing taxes, as promised, but did include a series of petty scandals, a bitter listing of which is beyond the scope of this article, except to suggest that, if anyone else uses the motto to assert his ability to do stuff, voters ought to make damned sure the Stuff is defined; and perhaps count their pocket change.

In stark contrast to the political use of the motto, when Bob the Builder says "Yes, we can!", he actually does stuff. And constructive stuff too, him being in construction and all.

The average American is totally dependent on others to do everything from adding motor oil to the car to cleaning the house. His analyst won't tell him this, but he has a burning need to be reassured that there is something that he (with the help of "We") can do. He's much less concerned to learn what that thing might be.

Television advertising never uses mottoes like "Yes, we can!" (except public service announcements), but many ads promise viewers that, yes, they can do something, and by merely engaging in their usual daily rituals. This includes: