From Uncyclopedia, the content-free encyclopedia
(Redirected from Bob the Builder)
Jump to navigation Jump to search 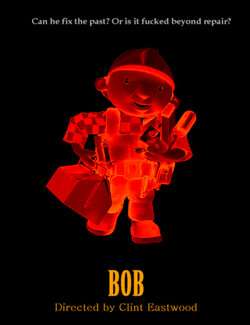 Promotion for Bob, the movie. Directed by Clint Eastwood.

Bob The Builder (August 18, 1952 - October 31st, 2010) was a former construction worker, born in Gary, Indiana as Robert Wayne Johnson. He is the first fugitive ever to be captured deceased on the long running Television program America's Most Wanted, having been crushed underneath a Paddy Wagon live on camera in the series most controversial episode, due to his unusually short stature, poor physical condition (he was a stubby fat ass), and unwillingness to comply with law enforcement. Had he lived, despite medical evidence that he would be in a permanent vegetative state for the rest of his natural life, he was slated to be charged with a long list of crimes such as contracting without a license, resisting arrest, public indecency, and the death and disappearance of Jimmy Hoffa, who is rumored by eyewitnesses to be encased in the concrete of one of the bridges Bob constructed around the San Francisco Bay Area in the 1970's. Despite widespread opposition, the law looked at this as probable cause in charging him.

As of March 2012, his soul is currently in Purgatory, awaiting the assignment to either Heaven or Hell. It will be an issue in the upcoming Electoral Votes.

For those without comedic tastes, the so-called experts at Wikipedia have an article about Bob The Builder.

Robert Wayne Johnson, nicknamed Bob by his early childhood com padres, was born in Gary, Indiana in 1952. The first five years of his life, from what Bob could recall in his most recent interview before his untimely death, were the most enjoyable years of his life. Details of which remain largely scarce. It is rumored, however, that he was a close friend of Michael Jackson. Come to your own conclusions about the goings on there...

He was five years old in 1957 when his father, Richard, a well-respected ex-New York Firefighter, gave him an Axe that year for Christmas. After successfully chopping down a tree in their front yard for the festivities soon after, his joy would quickly turn to psychological trauma as he watched it fall on top of their house, completely leveling the entire property and killing everyone inside. While they could not charge him for manslaughter at the time due to his young age, from that day forward he was dubbed "The Christmas Killer", and greatly shunned. Now alone in the world, he would spend his days in exile following this unfortunate incident, studying The Art Of Construction by Sun Tzu, until the day came when he hit Puberty and nobody would be able to recognize him. Hoping to use his acquired knowledge to build a happy life from his misfortunes, once that day finally came, he devoted himself wholly to his studies and nothing but.

In 1970, times were changing. The hippie culture was ripe with the smell of sex, The Beatles were the most popular band in the world, exceeding the first coming of Jesus even, and Bob was now 18 years old, and grown into a man. Now referring to himself as "Bob The Builder", ever confident in his abilities, he left Indiana and moved to San Francisco, California, eager to begin his new trade. He was eventually regarded as one of the most affluent people of his profession, awarded his own TV Program, and billed top dollar. This is where he met his wife Wendy; the icing on the proverbial cake. They soon married, and life, for once, was good for young Bob. Then, at the turn of the decade, the unexpected happened...

In early 1980, with the added stress of living the perfect life, on top his his past psychological trauma, Bob was noticed by some of his co-workers one day talking to an Excavator. Bob claimed that it told him to "cancel the series" and "all is futile". Soon going catatonic following this, he was rushed to the Hospital, and diagnosed as having Schizophrenia. Further behavioral issues throughout the decade also revealed an underlying descent into Bi-Polar disorder. He remained heavily medicated for the rest of his life following these diagnoses. Not that he ever took his medicine, however...

Throughout 1982 as his problems grew worse, he began beating his wife on a regular basis. In 1984 he was finally arrested, convicted, and sentenced to 100 hours of Community Service, which would keep him out of prison. His only other option aside from suicide. He was also told that he had to "say sorry." He was later arrested again in 1988 for Public Indecency, as he had exposed his privates on live TV. His show would also be canceled following this.

Being given another chance, following his fall from grace, he made various guest appearances on Bob Vila's Home Again in the early '90s, in the oft-aired half-time segment entitled Bob & Bob. After having hit Vila in the head in 1993 with a 2x4 out of anger one day, however, presumably over the election of Bill Clinton and Vila's own democratic views, he was carried off the set by security and told to never come back. 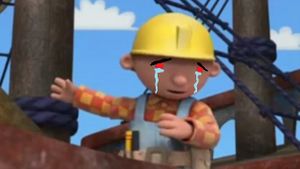 Bob finds the one thing he can't fix: his loveless marriage.

By 1996, Bob was 44 years old. He was broke, drunk, and at his absolute worst mentally. He had now racked up numerous drug and domestic offenses, and there were rumors surfacing at the time about his activities in the '70s even, that he was in lieu with the Mafia and had a role in the Jimmy Hoffa case (some might even say "Bob The Builder" is actually his nickname given to him by the Cosa Nostra themselves), and that his license to practice Construction, generally, was non-existent. Being painted to the world as a "mixed bag of tricks", Wendy had enough, and after 20 years of marriage, filed for divorce citing "irreconcilable differences". Believing his past psychological trauma now to be the root cause of all his issues, Bob sought help. Having been denied help, he snapped and committed his most notorious crime yet...

Wandering through the California Countryside early on the morning of September 11, 1996, Bob snuck onto the property of one of the local farmers, straight through a barrage of bullets. Noticing a Combine Harvester sitting "almost in wait" in the middle of the man's field, according to an eyewitness, he made a run for it. Surprisingly, given his short, fat stature, he made it. Eyewitnesses also claim that Bob had started practically singing his own theme song at this point, which added to his already unpredictable nature. Everyone would know soon enough, however, that Bob was just "letting off steam." He began running over everything and everybody he saw for almost an hour straight until someone dialed 911. The cops spiked the Combine Harvester and were finally able to get him cornered, by which time he broke down and cried like a baby. He would later be sentenced to five consecutive life terms in prison, with no possibility of parole. He escaped in 2010, ending up on America's Most Wanted's 15 Seconds Of Shame.

On Hallows Eve, 2010, Bob made his great prison escape. The escape is well documented in the movie The Shawshank Redemption, which was largely inspired by Bob himself. However, things in real life aren't always what they seem in the movies, and there was no beach side reunion in Mexico between mixed races in the end. Instead, how it went was this: Bob was barely out of prison an hour when he was discovered in the bathroom of a 7-11, still in his jumpsuit, making out with one of the employees. At the time of his discovery, she was also arrested for failing to report him to the proper authorities. As this was happening, Bob saw an opening in the action and decided to run. Almost immediately, he found himself being chased down on foot and by vehicle. He thought he could make it, and that he was home free, but by the time they had called in the Helicopters and Attack Dogs, however, they had him. But not exactly in the way that they planned. In the end, as luck would have it, he had tripped and fallen in front of a Paddy Wagon. The driver never noticed him, and proceeded to run him over, snapping him like a twig. Bob died near instantaneously from his injuries, the Paddy Wagon was exchanged for a Meat Wagon and the world as we know it is now at peace. He was 58 years old.

He is interred in the same exact place where he died as a visible reminder to all the world: don't be like Bob. Suck it up, and look past your troubles. Keep a clean conscience, live long, and be prosperous. Like Bill.

A cohesive, autobiographical movie based around the aforementioned life and times of Robert Wayne Johnson, or Bob, was released on December 21st, 2012. Produced by Warner Bros. in association with Malpaso Productions, the film was written, produced and directed by the one and only Clint Eastwood. This was his 473rd film since he began his career in the early 1800's.