From Uncyclopedia, the content-free encyclopedia
(Redirected from Dump)
Jump to navigation Jump to search 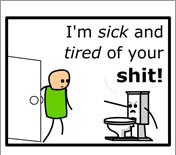 If toilets could talk, they'd say this.

~ James Brown on Taking a dump

~ Elvis Presley on Taking a dump

~ Oscar Wilde on Taking a dump

~ Sarah Qian on Taking a dump

“I take 12 different colored dumps at once.”

~ Andy Warhol on letting people know about his feces

“(I can't get no) satisfaction”

~ The Rolling Stones on NOT being able to take a dump 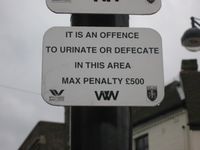 Taking a dump, defecating, squeezing one out, or in Australian colloquialism doing a 'bunda', is often related to the act of stealing a car. Once you start it, you want to get out of it as fast as you can. The act is more common in countries such as Cambodia, Vietnam, Mordor and Yugoslavia. Popular tourist destinations for public performance include the balcony of QVB, Sydney. Unfortunately, this act has been prohibited in more backwards countries, such as the US and Heaven.

Dump as a Big Place Where All The Garbage Goes[edit]

Dump can also be a big place where people dump stuff that looks and/or smells UGLY.

In late 2009, 'taking a dump' enjoyed a significant resurgence in the public eye when it was rebranded as 'doing a bunda' under the charismatic leadership of Sarah Qian, a local political and faecal activist. This culminated in a public performance by Qian herself on the 29th of December 2009. After ceremoniously taking a dump of the balcony of the Queen Victoria Building in Sydney, Qian proclaimed the beginning of the decade of defecation, as a new age of faecal freedom and the promise of a browner tomorrow, to her legions of devoted followers.

As a result of her momentous campaign, the 'doing a bunda' slogan has permeated into the popular vernacular and has become a staple of Australian slang. Furthermore, Kevin Rudd the prime minister of Australia declared the 29th of December as National Bunda Day, encouraging Australians everywhere to take a dump.

In 1974, it was voted most popular past time of all Austrailian people. They spent an average of 75 hours a week 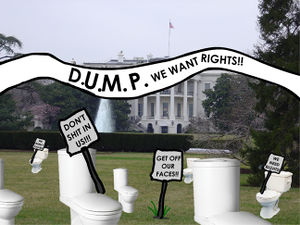 An image of the most recent D.U.M.P. demonstration.

The "Dump Under Mike's Porch" (D.U.M.P.) was an organisation of rebelling toilets who had "Taken too much shit". They have demonstated in many major cities such as New York, Washington DC and Flushing Meadows. The party's philosophy was "To encourage taking dumps under others porches and not in us, giving rights back to toilets and not giving us shit." Unfortunately, 500 activists were brutally murdered by the Mafia in their last riot, causing the organisation to shut down.