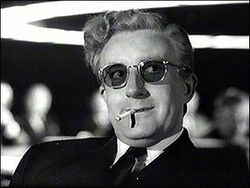 Tony "Kyser Soze" Visconti (born April 24, 1944) is the award-winning producer of many things including music, countries, and high profile cover-ups. He is best known for his career as a record producer, and has worked with some of the leading lights in the world of music, including David Bowie, Val Doonican, T-Rex, Wildeboys, Phil Collins, Trent Reznor, Placebo...and Morrissey.[1]

Visconti was born in America, but he, bless his heart, never allowed that to hold him back. At age 15, Tony, by that point a talented musician, could often be seen playing the Skin Flute or the Double Bassoon in his native Brooklyn. In 1953, he was shipped off to England by his parents. There, he made his permanent home. After ten years of performing for the homeless by the Embankment in London, Tony took up a job as "tea boy" at a recording studio in Soho.

By the late 1960s, Tony had taken over most of the duties within the recording studio, and took over the business upon the suspicious death of his boss. His first act was to marry some woman from the TV show Opportunity Knocks. Indeed, opportunity did knock for Tony; most bands were so high on drugs during the “Swinging 60s" that he was able to convince them to sign over all of their royalties in exchange for his services. By the time the majority of the artists had recovered during the mid-1970s, Tony owned 58% of the music industry. 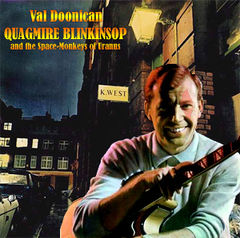 The album sleeve for 1972's Quagmire Blinkinsop and the Space-Monkeys of Uranus, the legendary concept album that put Visconti on the map.

Visconti's primary concerns are production, fecal matter, and sound engineering in that order. He was hired by a number of acts throughout the 1970s until 2006, when in a baffling career move he produced a "hit" album for emo rocker Morrissey.

He has been renowned for pulling a few stings and "blowing" a few "whistles" on his productions, which can be seen throughout his career; many of the acts with which he was associated went on to be successful despite themselves. These very acts continue to this day to promote his "production style, attitude, and support". These musicians (or 'Visconti Hoes' as they are known among those in the know) comprise a small arsenal through which Visconti can garner more work and accolades within the music industry.

Recently, Visconti has gone on the record citing David Bowie as his favorite act to work with because of their long ‘history’. In fact, Visconti would probably have fallen into the abyss without help from Bowie's Kabbalah in the seventies. He said of Bowie in 2003 after their collaboration on "Unreality":

When Tony Visconti began his work on the seminal 1972 concept album Quagmire Blinkinsop and the Space-Monkeys of Uranus by Val Doonican, he realized neither the success the release would bring nor how this success would lead him back to working with some of the 1960s' most famous art-house rock musicians. In another turn of luck for Visconti, most of them had been too high on drugs to remember how he had earlier cheated them out of their fortunes. In the interest of "artistic freedom" he was also able to sign many of them to long-term contracts.

“Oh, I vaguely remember him...he made tea for me in the studio”

David Bowie is arguably Visconti's greatest ally, for Visconti has tirelessly helped Bowie overcome his issues with “selling out” throughout his career, which has led Bowie to return the favor by helping Tony with the whole issue of “selling in” too much. 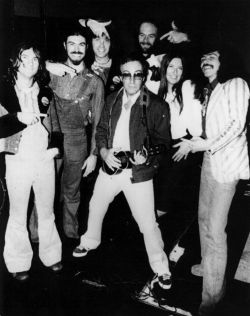 Tony Visconti, "Chillin’ with the band" during the Glam Rock Era of the Seventies

They first collaborated in the late '60s with the single "Rubber Band", rumored to be a dark exposition of gay sex and Catholicism. In reality, it was the result of Bowie, Visconti, and the band leaving the makeshift recording studio in Clapham Estate running whilst they had one of their "Friday Freak Fests”.[2]

Marc Bolan was another of Visconti’s acts, the one Visconti used as a much-needed "back up" when Bowie went AWOL. Unfortunately for Tony, this failed when Bolan took up driving, subsequently failed his driving test, and thus attempted to cure his fear of driving "implosion style". The resulting fireball lit up the south of England for nearly two weeks.

In 2006, Visconti began producing an album with the former front man of The Smiths on an album declared to be "the best Morrissey has ever done".

Morrissey recently spoke of a "confused state" he felt after working with the legend that is Tony Visconti. Many claim that he has developed all of the glam bitchiness and acquired the frequent mid-life crises that David Bowie experienced for thirty years due to working with Visconti. Being a bit of a queen, Morrissey also named the album after an argument Morrissey had with the amiable producer, calling Visconti the “Ringleader of the Tormentors”.

Extract from the introduction to the Tony Visconti Biography by Morrissey 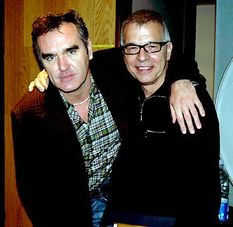 Tony maintains that he and Morrissey got on well

Tony Visconti is employed by many countries to produce their albums and as an outside "consultant". His values are Right Wing and he has directed many to a Satanic stage where they can be introduced into the UN. He has only achieved this with countries in Eurasia as of yet, and rumours abound as to the whether Visconti’s political contributions will continue into the future. Some believe that he may be retiring from his 'Kissinger style' duties.

Tony Visconti had the great task of making this cover-up a reality in the mid-1970s. The young Tony Visconti was hired by then-living Dick Cheney to cover up the small island in the Atlantic as it was “pissing him [Cheney] off”. Visconti promptly accepted, and Atlantis is to this day denied recognition by the UN despite its continual petitions to be accepted as a state and the "they're real people too" stance that the German Chancellor has taken. Tony Visconti has given the "finger" to both parties, as a way of incontrovertibly saying "f**k you all".[4]

Currently Visconti is going though a bit of a low patch working with acts like Morrissey, he has alluded however that this will all change soon as he'll do another David Bowie album if Bowie doesn't get angry and throw his 'lolly' at him again. He is also rumoured to be considering producing Pete Doherty on an experimental Electro-Ambient-Country Album called Pete’s feeling Low[5].

There have also been rumours to be in talks with Wildeboys for their comeback tour; Visconti can often be seen trying to emulate his former success with Bowie by trying to produce all of Bowies imitators, "I’ll take them all at once just to try and attain eternal youth and relevance" he has said in a Guardian interview in 2004.[6]

For the religious among us who choose to believe lies, the so-called experts at Wikipedia think they have an article very remotely related to Tony Visconti.