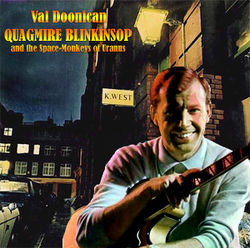 Original sleeve design for the 1974 album release. The back cover features Val in a semi-transparent full length body stocking.

“That Quagmire look was so hot, well hung and snow white tan, God given ass....”

The Rise and Fall of Quagmire Blinkinsop and the Space-Monkeys of Uranus, to give the title its full name, was a 1974 concept album by 60's crooner Val Doonican. The album marked Val's departure from the mainstream in favour of a more progressive rock sound. Many have made comparisons to David Bowie's Ziggy Stardust and the Spiders from Mars album released two years previously as a major influence, though Val himself has denied any such link. 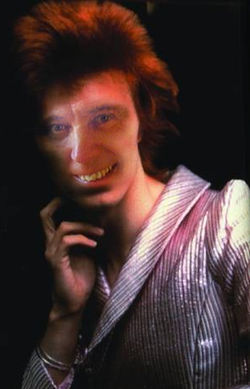 Val's androgynous look was a shock for many of his older fans, and is said to have angered the Pope.

The album represents a tale of an intersellar visitor to Earth and the alien's attempt to liberate the planet from the banality of comfy slippers and warm cardigans. Quagmire Blinkinsop's character is very much larger than life, a symbol for the excess of the rock and roll lifestyle that was prevalent during the early years of the 1970s.

In an interview in 1978 Val commented that he really wanted to make a statement with Quagmire Blinkinsop about his life at the time, detailing the excesses of a rock star. Sexually promiscuous, wild in his drug intake, Val attempted to reach out to his audience with a message of universal love, but realised that his message was doomed. The songs reflect the themes of a messianic alien who is here to help mankind, but who will ultimately be destroyed by the very people he seeks to help. In the poignant lyrics of the final track, the haunting Paddy McGinty's Goat, Quagmire lies bleeding amongst the carnage of his former glory, his iridescent catsuit torn from his body to reveal a blue woollen jumper and red cravatte beneath.

Influence of Quagmire Blinkinsop within the History of Music[edit]

For those without comedic tastes, the so-called experts at Wikipedia have an article about Quagmire Blinkinsop and the Space-Monkeys of Uranus.

From its release in April 1974 many within the industry realised that Quagmire Blinkisop was a monumental album in the history of popular music, but then it was the 1970s and almost everyone was off their heads on drugs. Val's whiney highpitched vocals has been an inspiration for numerous artists including that gay guy from Placebo as well as anyone involved in "BritPop" during the 1990s. His androgynous look has been copied by people such as Marilyn Manson and Billy Ray Cyrus.

In 1975 Val won through to his country's heats of the Eurovision Song Contest and against all odds was voted to represent Ireland ahead of Dana. The song he choose for the entry was the title song from Quagmire Blinkinsop, and was a highlight of the show as his dance routine at the end of the second verse with the famous removal of his gold lamé skirt to reveal a matching miniskirt beneath becoming a defining point in the history of the contest. As history records Val only managed second place losing out to the winners from the Netherlands and their amusing song about the penis.

In recent years songs from the album have featured in a number of movies, including Donnie Darko and Titanic. The song "Delaney's Donkey", which has been covered by artists as diverse as Bono from U2, Westlife and Clannad, was used to great effect during the "buggering sequence" in the film Brokeback Mountain.