For those without comedic tastes, the so-called experts at Wikipedia have an article about Klaatu Barada Nikto. 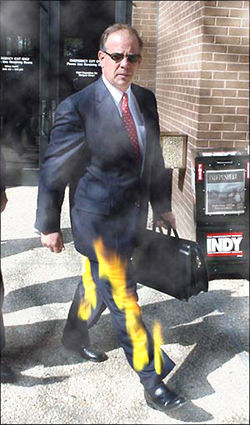 Bob Nikto emerges victorious after successfully defending Michael Jackson against a charge of child licking
“I called out Klaatu Barada Nikto, and look where it got me”

Klaatu Barada Nikto is one of the world's largest law firms. Founded in Hollywood, California in 1945, the firm employs more than 900 attorneys and advisors in 15 cities worldwide, including London, Brussels, Moscow, Wigan and Brussels. According to its Web site, its "vision is to address the array of legal challenges you may encounter in achieving your business goals, and pound the bastards into the ground".

The firm represents regional, national and international clients in a wide range of areas, but mainly focuses their clientelle on A and B list celebrities, film stars and gangster rappers. Known clients include Barry Manilow, Clint Eastwood and Anaïs Nin. They have successfully defended clients against charges of rape, pillaging and mime, as well as representing many of Hollywood's finest in random charges against Directors, Producers and Drug Manufacturers.

Many people consider that the television series Boston Legal was based on Klaatu Barada Nikto, despite for the fact that they are based in Los Angeles and not Boston. Oh and the fact that a lot of the cast are like really attractive and its a known fact that ALL Lawyers are ugly, horse-faced masocistic deviants.

Notable Past and Current Attorneys[edit]

During the early 1960s Klaatu Barada Nikto had a number of famous faces clamouring for their services. British Actor Michael Rennie, star of the TV show The Third Man, was ill, during the making of The Day The Earth Stood Still, but he told us where we stand, against the strict orders of his Hollywood masters. An attempt was made on his life, leading to Criminal proceedings, whereupon Rennie asked Bob Nikto to seek punitive damages. The case became a cause célèbre, Rennie won his case and the fame of Klaatu Barada Nikto became assured.

Throughout the 1970s and 1980s as litigation culture became de rigour incressing numbers of Hollywood Stars turned to Klaatu Barada Nikto as claim and counterclaim increased their fame. Brad Klaatu represented Elizabeth Taylor in forteen of her thirty-seven divorces.

Sisyphus Barada is often perceived as the least controversial of the founding members, and so far his most famous case involved Gangster Rapper Tupac Shakur, whom he represented in his claim for damages against the Sara Lee Company, following his announcement of addiction to Cream Cakes in 1996. The suit was successful.