During a campaign raising awareness about the dangers of false eyelashes

For those without comedic tastes, the so-called experts at Wikipedia have an article about Marlene Dietrich.

Like David Bowie before her, Dietrich kept chopping and changing, re-inventing her image to keep up with the fickle world of acting, singing, painting, oceanographing, backing dancing, stage managing, being a best boy, writing books, cooking, fighting, making chemicals and answering phone calls while doing the boss.

Dietrich was born in Berlin, Germany and immediately began acting in films. Notable early roles include playing the worm in Dier Gangstung Von Shor! (That's not a baby! More like a giant worm!) and the little girl holding a teddy in Fier Funf Fand Gras (Translator no longer at this address, please forward request on). Dietrich soon made a name for herself in Germany and the government acting at the time decided to send her to the United States, so she could make more money for herself and help destroy all independent meaningful films.

Dietrich began her career as a film icon by acting those female lead parts where the female always talks with a slightly worried tone of voice. When a man addressed Dietrich on screen, it would cut to a close her up of her teary eyes and her lines would mostly begin with "But...", her characters would normally be brushed aside as the men do the important stuff. Still she was pretty good looking and became famous because of that.

It's always a bit creepy when an actress decides to become a singer, and this was no exception. People flocked to see Dietrich in concert as she sang as if she had severe throat cancer. In her films she had a husky voice but as a singer it was even worse, she sounded like a dying horse. Still there was only white singers to go see and she wasn't the worst of them. One of Dietrich's albums was remixed three times, the third time with rapper Jay-Z, chosen because of his pointless remix work with Linkin Park.

Dietrich decided it was time for a change and started to sell her paintings. They were mostly scenic pieces, some depicting the German countryside which she hadn't grown up in. She caused controversy with her piece "Hollywood is ran by Jews" depicting a Star of David in the Hollywood lettering. The National Grammar Council of the United States deemed it irresponsible and a poor example for other immigrants wanting to learn English and Anti-Semitism.

Dietrich became increasingly aware of World War II and the publicity that could be made from it. She decided to stop painting and revert back to her singing in order to go and entertain the troops. Though Nazi allegations had been made against Dietrich, she had become an American citizen by 1939 and had her swastika shaped swimming pool demolished in 1940. She earnt one of those shitty made up medals for her singing and dancing because she did it in dangerous places. 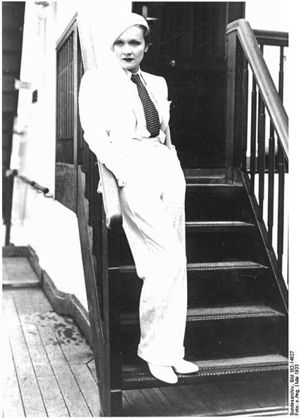 Trying to look like an artist in order to gain credibility

Dietrich has always expressed an interest in the Earth's oceans, and one fateful summer's day in Febuary 1948 she went on her first expedition into the Pacific Ocean. The expedition was to monitor the effect of decreasing shrimp population levels on other marine creatures dependent on the shrimp as their main source of food. Dietrich and her team of twelve scientists concluded that when there is less food for a species to eat, they either move or start dying. Groundbreaking as this conclusion was, no offer was made for a second expedition and Dietrich remained bitter about this for the rest of her life. She continued to contribute to Oceanography journals until the day before she died.

While undergoing a period of personal crisis, Dietrich tried her hand at a surprising number of professions. Most disasterous were her stints as a chef, best boy and personal assistant. Friends and family tried to get Dietrich back on track with showbuisness as they began to lose the luxuries and privelages of knowing her. While they managed to stop Dietrich from becoming a Chinese spy, they could not stop her from pursuing what they percieved as useless endeavours like a tour of duty in Vietnam in 1966. Dietrich stopped career jumping when she became a chef in 1971 and ultimately decided that working for a living was the worst existence in the world. It was after this revelation that she became a writer, publishing several memoirs and novels based on her experiences.

After famously breaking a leg on stage and ending her showbusiness career for good in 1975, coining the phrase "break a leg" as an ironic way of saying "good luck", Dietrich became bored of life and did nothing for ages. When she eventually died of boredom in 1992, her body was draped in an American flag and flown back to Berlin with the message "thanks for this, we got all we needed out of her but we can't be bothered to deal with this now". She was buried next to her mother's house, ruining her mother's lawn.