Whoops! Maybe you were looking for 0?
“ö”

O is the 15th letter of the alphabet, and the 9th letter of the keyboard. As the middle of the five vowels, it it sometimes prone to insecurity, and can harbor a sense of not belonging. However, despite being withdrawn and humble, it is definitely the most important vowel of them all.

O is for English[edit | edit source]

O enjoys the distinction of being the only letter of the alphabet that is a word all by itself (apart from A and I). But when using O as a word, make sure you don't confuse it with the totally different word, Oh. You use O to lend earnestness to an appeal when making a direct address, for example; "O shit, why hast thou befouled my loafers?" See how by using O, you can lend poetic appeal to sitations even as mundane as stepping in dog poo? Oh, on the other hand, is used to exclaim surprise. It is almost always partnered with the accusative conductive forstrative case of the word shit, for example: "Oh shit, I just stepped on a turd!"

Many books, such as the Bible make extensive use of the letter in their text, with some great works such as The Odyssey and Memoirs of a Geisha even using O in their titles. And Irish wordmonger James Joyce was not shy about his predilection for the O. In fact, his novel 'Ooooooo! Ooo, Oooooo' contains no other letters at all.

The army word for O is 'Oscar'. By saying 'Oscar' over the radio, soldiers can tell each other they are referring to the letter O without any eavesdropping enemies understanding what they are talking about. Here is a demonstrative conversation.

Tower: You've been assigned to land at terminal O.
Pilot: Don't you mean Terminal Oscar?
Tower: We don't name our terminals around here, don't be an idiot.
Here is another conversation:

O is for Foreign[edit | edit source] 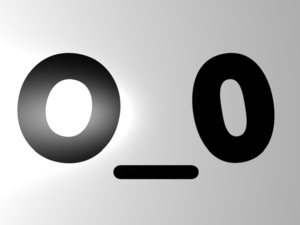 Some foreign languages have their own versions of the O, all of which are pretty lame:

Actually, the Viking O is pretty cool I guess. Also, the greek for O is Omicron, named after the eponymous transformer. If you don't remember, Omicron was the one that was so big he transformed into a fucking planet, so I think it's pretty obvious how important this letter is to the Greeks.

O is for Science[edit | edit source]

O is very important in the world of science, as it stands for 'Oxygen' on the periodic table. All living things breathe oxygen, except fish which breathe water and plants which don't have lungs or mouths or anything. The only type of scientists that seldom use the O are mathematicians, because it looks too much like a zero (this is especially true of Viking mathematicians).

O is also a blood type. In fact, it is the universal blood type, which means it's the only blood type transfusable between humans and aliens. Remember though that the two sub-types, O-negative and O-positive, are not compatible with each other, as they go in opposite directions around the body. Doctors also use the O on medical charts as a kind of code-word to indicate that a patient's condition is the result of over-enthusiastic masturbatory habits.

Additionally, O comes in handy when telling someone the time. You'd look pretty stupid if someone asked you the time and you told them it was 5 clocks. Though I guess you could just say it was one minute past five or something.

O is for Sex[edit | edit source]

O is the international symbol for the human "ecstasy face" facial expression. It is also common for people to say 'O' repeatedly during acts of lovemaking. O was also the subject of a pornographic feature film, 'The Story of O'. However, like similarly misleading titles such as 'Trainspotting' and 'Straw Dogs', there weren't actually any Os in the movie.

O is for Ireland[edit | edit source]

O can be used as a prefix to any proper noun to indicate Oirishness. For example: