From Uncyclopedia, the content-free encyclopedia
(Redirected from Slap)
Jump to navigation Jump to search 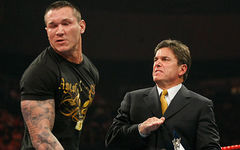 WWE's Randy Orton proves that however big and muscley you are, your boss can still bitch slap you!

For those without comedic tastes, the so-called experts at Wikipedia have an article about Bitch slap.

The bitch slap is to date the most effective and the most destructive weapon of the female species, as demonstrated. Used for hurting the male species and for some of the greatest entertainment in ancient and modern times, the famous Cat Fight.

The bitch slap is a method that bitches use to degrade a dog. It is commonly misdefined as a "bitch" (a rude or unscrupulous woman) slapping someone. This however, is incorrect, and should not be taken lightly. It is actually the result of an alien dog in your household!

The Meaning of the Bitch Slap[edit]

IS much the same of slapping someone but a 'bitch slap' often uses more frce and is being sapped using the back of the hand.

History of the Bitch Slap[edit]

The Origin of the Bitch Slap[edit]

The Bitch slap is rumoured to have originated in ancient Biblical times, when Jesus first came to earth. It was thought that Jesus unwittingly had angered a female wearing a beard at a stoning (As seen in Monty Python's Life of Brian). The woman turned, slapping Jesus across the face. The name 'Jesus slap' was dropped by the Apostles when writing the New Testament. Although many scholarly historians believe that when George W. Bush travelled back in time for the fifth time he convinced the Apostles to change it so he may win votes in a future election. It is rumoured they were persuaded by the timely imitation of an exotic animal, the monkey. In Nordic countries Vikings also used the term. It's even been heard in a speech held in The Faroe Islands where Terji Djurhuus was president at the time. He said: "...So now it's time for us to stand as a unit and make a name for ourselves. We're going gung-ho and if necessary we'll use our ultimate weapon. I'll only say it once. The deadly weapon of Female Dog slap!!!!"

As we know the term used on a female dog is bitch so it's pretty obvious the Female dog slap originates from the term bitch slap. The battle in the Faroese was indeed ended with a devastating Female Dog slap which "The Great Emma" fell as she was outclassed by the great rapper Terji Djurhuus.

The Bitch Slap in the Modern era[edit]

The first recorded bitch slap was given by Sir Thomas Shithead to Albert Einstein after the first ever neutronium explosion, which caused the third ever breaking of the physics.

The bitch slap was popularised in 1998 while Tom Cruise was walking his dog, "Poopsie" through a random, conveniently placed crop circle in the shape of an erect penis. After Poopsie did what her name came from, a crippled, blind Shnauzer jumped out of the corn field, and tried to violate Poopsie. Poopsie, of course, didn't agree with such behaviour, and slapped that Shnauzer to Pennsylvania. It has been reported, that in response to this, Tom Cruise quoted

This has been unconfirmed, but is strongly believed, because Tom Cruise is weird, and would say something like that. After all, he named his dog "Poopsie".

Poopsie reportedly died three years after this incident, after trying to bleach her fur. Many believe that she was trying to be a prostitute, and, well... this is probably true. Of course, news stations with held this information and changed the story to animal abuse against small Cuban children.

Babies administer bitch slaps when their bottle is first taken away. They get really pissy and start smacking random people. If random people aren't there, Teddy Bears receive the Treatment. Poor things. 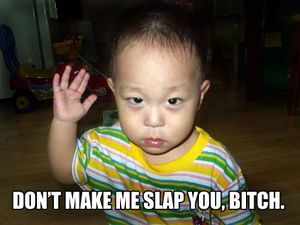 The Steps of the PROPER Bitch Slap[edit]

If you see your bitch following through these steps, proceed to run in circles, howling like a spider monkey.

The initial slap may be followed by movements that resemble finger-snapping, but this is most likely only a mere coincidence.

The bitch slap may also be used to force a person into slavery, if done correctly. The victim, hence thereforth being bitch-slapped, will have no choice but to serve your desires, thus creating the term,"Slapped into slavery".

There are a few variations to the Bitch Slap.

The traditional method is the opening of the palm of the hand that was once holding ketchup. It then releases the ketchup into Shadi's cleavage

The fabled ring method incures massive Norse Gods and occasional bleeding (especially if the striker is engaged). This is where the ring, and hopefully for your sake not a diamond engagement ring, is turned on the hand so the rock or in some cases the sharper point is on the inside on the hand. This may cause massive bleeding to the persons face.

This one seems to be the most effective and easiest method especially when it's been 3 days and the bitch still don't got yo money. Simply turn your hand to the back hand side and cock it back. Bitches look at it like it's a god damn persona...THEN BAM!!!!

The Signs of an Alien Dog[edit]

There are several signs of an alien dog in your household. They are as follows:

Now, remember that phone number and that Echelon is after you, and you'll be just fine.

The bitch slap may never be fully preventable, as recent studies have shown that many dog-owners often ignore or completely disregard the importance of the bitch slap. The knowlagable paranoid freak will acknowledge its existence, however. If one does wish to prevent their dog, alien or not, from preforming a bitch slap, they may have to devote their entire lives to stopping the bitch slap from occurring. Notable people who have devoted themselves to this cause are people such as William Shatner. From that, one can guess which kind of people are noble (weird) enough for such a cause.

To stop the bitch slap, one must do as follows:

In reality, none of the steps listed will help one stop the alien dogs, in fact, we got all of the information in this article from a strange old man who resembled a dog. We were sure it was Bugs Bunny.