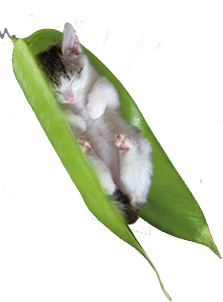 An ideal kitten for huffing

The kitten plant (felinus valarium teeni-padded-pawus) originated in North Africa where it grew small and soft as playful bushes with tiny thorns. The local tribesmen used the stems for a mildly hallucinogenic tea and the leaves to make their slipper-like hunting shoes. It was first traded to the Europeans when buyers for French fashion guru King Louis XIV got a load of those fuzzy shoes. Powdered wigs, stockings, and the heeled shoes then popular with French royalty and Elton John were traded for tribe's entire crop. A sad historical side-note: the North African tribe was wiped out within a year of meeting Louis when a gaggle of nocturnal lemur, engaged in mating season, mistook the wigs for masculine competition. The heeled shoes impeded the tribesmens' flight from the angry lemur. Only the foppish French stockings were left to tell the tale.

The first kitten plants to come to the Americas arrived on ships with the French explorers. Trappers and fur traders attempted to dupe the Native Americans by passing off the larger of the furry leaves as actual skins, but the natives were not amused. During the little documented Battle of Cat's Bluff, the plant was taken after the slaughter by the Farfisa tribe and they began cultivating the kitten plant which thrived and grew naturally in the Americas from that point to the late 1800s. Not coincidentally, the North American natives also used the plant for trippy beverage and fuzzy slippers. Due to the established popularity of moccasins with the white folk, the hairier slippers lost favor when the natives couldn't seem to move them at the trading posts. It was just as well: when kitten huffing became a problem in the early 1900s, the kitten plant was then made illegal to possess.

New growing techniques have been used in the process of growing and cultivating the kitten plant in modern days. Hydroponic kitten plants fertilized with Friskies kitten plant food will produce large yields of extremely potent orange kittens. These methods, however, have been largely abondened because the kittens were so powerful that everyone who huffed them died of extreme overdose.

This banning of the kitten plant soon lead to a great uprising of kitten plant sales on the Black Market, and also a legal prohibition on the kitten plant. Kitten junkies were on the rise, and the use of kittens kept escalating at a surprising rate (see "kitten huffing" article for full details).

Another example of good pickin's
Retrieved from "http://en.uncyclopedia.co/w/index.php?title=Kitten_plant&oldid=5940788"
Categories: