From Uncyclopedia, the content-free encyclopedia
(Redirected from Nicholas Cage)
Jump to navigation Jump to search 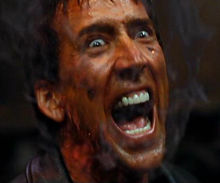 Nicolas Cage is real happy about his career.

For those without comedic tastes, the self-proclaimed experts at Wikipedia have an article about Nicolas Cage.

~ Nicolas Cage in response to something or other

“He can get very disturbed. The other day, Nicky boy ended up with his britches on fire & burned his dick off!”

Nicolas Cage (born Nicoloso Cagrissi Corleone; January 7, 1964) is an American actor and former mafia thug with a receding hairline. He was born to his identical twin mother, Johnny Cage and his identical twin cat, Faraday's Cage. He won an Academy Award for playing a suicidal alcoholic in the film Leaving Las Vegas, but has since admitted that he was unaware that he was being filmed for a movie at the time. However even with all these great acts Nicolas Cage suffers from severe M.F.S. (melting face syndrome) this causes each of his new movies to be released features a more elongated goo-like face. It has also caused his voice to sound like that of a Memphis born goose. However thanks to anti-aging techniques known as "masks" he has been able to establish himself as an awful actor even if it does include his face oozing onto the red carpet when accepts his awards. He is often known by aliens and real human beings alike as the worst actor of all time. His ability to "not-act-at-all-due-to-the-fact-that-he-is-fucking-stupid," as his manager calls it, has won him many awards in both real life and the fake. Many people in modern society actually watch his movies even though it has been scientifically proven to lower one's IQ (but increase one's testosterone levels by 1000%).[citation needed][This Can't Be True][Uncyclopedia can't lie - or can it?][suspicious quotes]

Nicolas Cage with a panty on his head

Nicolas Cage, born Nicoloso Cagrissi Corleone, was born January 7, 1964 in New York City. His father, Michael Corleone had hopes of bringing young Nicoloso up to be his successor as head of the Corleone crime family. However, his mother, Kay Adams Corleone wanted no such life for her son, so she put him in a basket and sent him down the Hudson River when he was only a year old. Little is known about what became of him for the next fifteen years, but it has been suggested by some that he was involved in a bizarre love/fetish affair with a boy named "Birdy" Modine. At the age of 16, in a strange twist of fate, Nicoloso found work in the lower ranks of the Corleone family doing "odd jobs". According to police records, his crimes during this period included robbing convenience stores, harassing Cher, and killing 32 year old Bobby Ray Lemon with his bare hands.

At the age of 17, he developed a fascination with movies. He particularly liked the films of James Cagney and Edward G. Robinson. It was this fascination that would both ruin his youth and shape his adult life. At the age of 18, while watching the film Little Caesar, he shot everyone in the theater including himself. He was put into a coma from the injury, but he was nonetheless the only survivor of the incident. Three months later, after waking, he was sentenced to life in prison at Alcatraz. 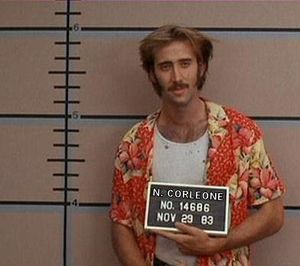 While in prison, Nicoloso (who had now changed his name to Nicolas Cage) met Sean Connery who had locked himself up for the last 5 years "jusht for the experiensh". The two became fast friends and planned a daring escape from Alcatraz Island. Against all odds, the pair killed a dozen guards with their bare hands and sailed to shore on a bar of soap. Upon arriving in San Francisco, Cage began writing a film script based on their escape. A month after he had started it, Nicolas finished the final draft of his script, titled "How me and Sean Connery Escaped from a Big Fuckin' Rock". Connery was so impressed by the script that he decided to pay for the entire production out of his own pocket (which is pretty damn big) and hired who he calls "the besht fuckin' movie director thish shide of Marsh", Michael Bay, to direct it. The film turned out to be a huge success and cemented the name of Nicolas Cage among those of the greatest actors in history. Also important to note, it was here that Nicolas Cage began a brief stint in comedy, producing such comedic gems as "Windtalkers" and the critically-acclaimed "The Wicker Man."

Nicolas Cage can see into the future, but only two minutes ahead. Therefore it is not known what the future holds for this amazing and troubled talent. This talent has evolved since his youth, which at the time allowed him to see things that had happened to himself two minutes after they had already happened. There is speculation that he is set to make a few Ghost Rider sequels, a few more National Treasure sequels, and that he will probably end up back in jail at some point. This is, of course, only speculation. Since we're speculating, though, I'm going to venture a guess that he'll probably accidentally have sex with your girlfriend at some point and get her pregnant. Failing that, he'll probably accidentally have sex with your mom. She'll probably get pregnant too unless she's already had a hysterectomy.

Nicolas Cage suffers from severe M.F.S., also known as melting face syndrome. This is why when watching a Cage movie in each scene as the movie progresses he gets a more elongated goo-like face. It has also causes his voice to sound like that of a Memphis born goose. However thanks to anti-aging techniques known as "masks" he has been able to establish himself as an awful actor even if it does include his face oozing onto the red carpet when accepts his awards. It has been remarked that he looks like a "sausage" though it has been corrected by Cage's agent that he looks like a "HIDEOUSLY DEFORMED SAUSAGE!" 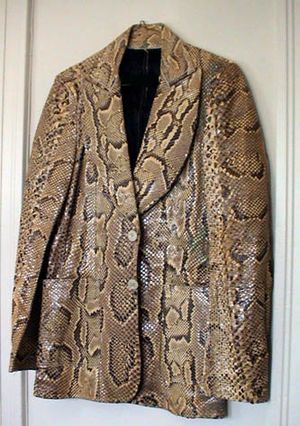 This here's a snake skin jacket. It's a symbol of Nic's individuality and belief in personal freedom.

In spite of (or perhaps because of) Cage's fame and success, he began to develop numerous mental illnesses. These included O.C.D., schizophrenia, Tourette's, satyriasis, Alzheimer's, and numerous undiagnosed disorders. Undeterred by his illnesses and determined to persevere, he decided to utilize these traits in his on screen characters. This has led to several memorable and acclaimed performances such as his role in Captain Corelli's Mandolin, where he played the role of the mandolin, and Ghost Rider, which was based entirely on Cage's real-life ability to set his head on fire at will.

Nicolas Cage has continued to have bees enter his eyes through a specially built bee dispensing helmet. Unfortunately he doesn't know how it got burned.

Nicolas cage has publicly stated: "I love all of Japan; I love sushi, I love Mount Fuji." While vacationing in Japan in 2006, Cage reportedly contracted a fever while signing an autograph for three blond, white, Japanese triplets. Shortly before returning to America, Cage recorded his lone hit single "My Favorite Things, My Favorite Things..."[1].

Not much is known on how his movie career came to be. Some scientists and film critics have suggested help from an evil deity or perhaps extraterrestrial beings. However it is known that after one of his latest movies Drive Angry, Nicolas Cage made a deal with the Lord of the Underworld that if he was released from death the world would suffer from another forty years of his films. 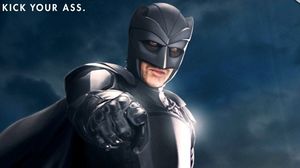 Nicolas Cage as BigDaddy the homosexual version of Batman.