From Uncyclopedia, the content-free encyclopedia
Jump to navigation Jump to search
“HA! Who needs him?”

~ Judy the Judge on Joe the Plumber

For those without comedic tastes, the so-called experts at Wikipedia have an article about Joe the Plumber.

Joseph Joe Jameson (born December 3, 1973), also known as Joe the Plumber, is the forty-fourth and current President of the United States and a guy you would just like to have a beer with. He served as the fifty-second Governor of Alabama from 2000 to 2008. He was sworn in as President on November 28, 2008 due to strong support from all of his rivals, the old guy and the black guy. He is the perfect example of a Real American. 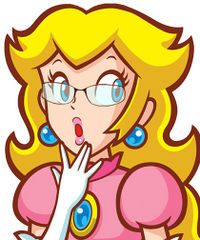 Joe's lovely wife, Jane, who is currently a robbery suspect.

Born in Smalltown, America on June 30, 1968, Joe was the second child of Norm Simplefolk and Norma Simplefolk, typical American pie farmers. He was raised in various barns around Alabama as his family looked for the perfect American pie trees, along with his siblings Oak, Pine, Twig and Twine. Joe's grandmother, Jane Simple, was the mayor of a small village in Illinois for 2 months. His father Norm served as the president of the American Pie Farmer's Union from 1979-1981.

When his family finally settled down in a small village in Alabama, Joe was able to attend high school. In high school he found his calling in plumbing when he took an internship with the school's janitor. Following high school, Joe the Plumber moved to a major city in Alabama. There, he studied Plumbtology at Big Man College of Business and Important Shit for four years, living briefly with his cousin Joe Sixpack. After graduation, Joe went on to Plumbing Grad School in Kentucky, where he received his master's degree in toiletry, with a specialization in Kitchen Sinks. There, he met the girl of his dreams, Jane Doe, a hockey mom from Michigan. They married that summer (on July 4th of course) and, over the following ten years, had 2 children together, Hammer and Apple. Somewhere along the line, Joe fulfilled his childhood dream of becoming a full-time plumber.

The Road to the Presidency[edit | edit source]

After graduating from Plumbing School in 1997, Joe returned to Alabama and became a professor at the University of Plumb-Bob. Three years later, in 2000, he ran for Governor of Alabama, having grown tired of dealing with students unable to unclog a toilet. The incumbent, James the Electrician was defeated by Joe in a landslide upset when a video was leaked showing James the Electrician having sexual misconduct with a nut bolt.

During his administration Joe worked on educational reform to focus schooling on plumbing, and to rework Alabama's sewer network, with wife Jane leading a successful campaign to have all houses in Alabama connected to a water network rather than relying on wells. However, his term included a controversial addition to a bill that added sewage treatment plants to various elementary schools around Alabama. Although citizens of the state complained, Joe was able to counteract this by issuing coupons for one free plumbing job by himself to each citizen in Alabama. To date, only 0.5% of these coupons have been redeemed. Even with this faux pas, Joe's loving personality and charm worked the citizens of Alabama to support him again. 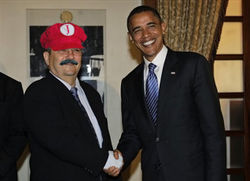 Joe the Plumber talks with Barack Obama before the October 15th debate.

Although Joe the Plumber was content with doing his work in Alabama after his political work, he felt a sense of rivalry with ex-governor James the Electrician. When he heard James was running for the presidency in 2008, Joe the Plumber threw down his tool kit and signed up with the support of the Coalition of American Plumbers. He officially announced his candidacy for the Presidency of the United Sates on January 6, 2007, in front of the Great National Tax-Clogged Pipe in Washington, DC.

Throughout the campaign, Joe emphasized issues like deregulating the sewage market, cutting toilet taxes, and providing universal plumbing. At one point during his campaign, he said that these were to be his top three priorities that he would peruse in his administration.

Joe the plumber participated in his first presidential debate against Barack Obama and John McCain on September 26. Joe did not fare well, with him calling Obama "that plunger" and being unable to name any nation outside America. On October 15, the final debate occurred. Joe was much more comfortable, and used many examples of situations that normal Americans encounter, like a clogged toilet. Joe performed so well that his support skyrocketed, his news coverage spread across the globe, and even Obama and McCain commended Joe for his work.

On November 4th, the elections began with Joe having a gallop poll lead of 60%. Joe won the election in a landslide victory, winning every single state. Many viewed Joe the Plumber leading an inspirational campaign that showed millions of ambitious children that even a plumber can be president. 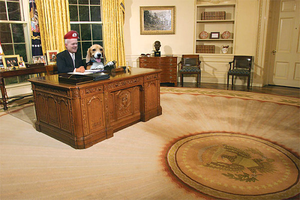 Never one for any type of formality, Joe wore his hat everywhere. His dog, Bowser, was always seen in the oval office during Joe's first term. So popular was Bowser that a doggy toilet was built beside the office, by Joe himself.

Joe was inaugurated as the 44th President of the United States on January 20, 2009. In his inaugural address he stated:

Early in his term, Joe signed a number of major laws in his presidency that greatly increased his popularity, including the No Plumber Left Behind Act. Additionally, Joe was able to increase federal research spending on self-flushing toilets.

As the War on Sewage raged on, Joe the Plumber began a systematic withdrawal from Iraq and Afghanistan, instead sending plumbers and humanitarians to those countries to create mass water and sewage networks. He called the project Operation: Watergate 2, which consequently increased the national debt by 10 trillion. The United Nations sent a thank you card to Joe for his generous free plumbing. 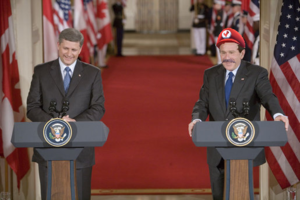 Joe the Plumber at a press conference with Canadian Prime Minister Stephen Harper. 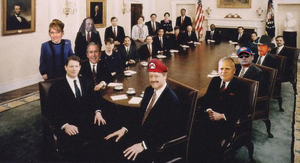 For those without comedic tastes, the so-called experts at Wikipedia have an article about Joe the Plumber.
Retrieved from "https://en.uncyclopedia.co/w/index.php?title=Joe_the_Plumber&oldid=6103582"
Categories: