From Uncyclopedia, the content-free encyclopedia
Jump to navigation Jump to search
“If you outlaw the catapult, only the outlaws will have catapults”

~ A Sensible Roman Guy on why we should all have catapults, thus lessening (currently rife) catapult crime.

A catapult is an ancient device that was designed to throw bags of angry cats at enemy troops. This was a very effective method of both pissing off the enemy and for getting rid of the excess kitten population. The original catapult was invented in the Middle Ages by bored and sadistic military engineers who were under the impression that they really needed an invention to properly throw cats. After failed attempts, such as tying kittens to arrows and the cat slingshot, they figured out that by putting the cats in a big bowl and then moving that bowl at high speeds they were able to deliver a large number of different sized felines over great distances. The catapult would later be used to try and throw other objects like big rocks or burning balls, but many found much more pleasure in the sound of a cat being hurled at great speed. Can you blame them?

Catapult got its name from its use for propelling specially trained killer cats into enemy fortifications during sieges. 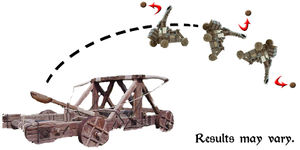 Catapults can be loaded to launch anything, even loaded catapults(shown launching the first crap grenade.)

The most powerful weapon on Earth (not involving gunpowder), catapults were invented by a Viking back in the Dank Ages. The idea was born when the feared Viking Doonce the Idiot was kitten huffing, and the kitten bit his left cheek and held on tightly with its fangs. Furious, Doonce vowed to kill the damned cat, but was distracted by a hallucinatory kitten huffing rush. So he built the thing he saw in his head using a combination of trees, wheels, beef jerky, rubber bands, gravel, lead and axes.

He finished it in just two half hours, which was an amazing feat for a blind and deaf Viking that smelled like a Canadian fish farm during feeding time, but an easy task for Doonce because he was neither blind nor deaf. After it was completed he sat down to think about what to do next (remember that thinking was not that easy for a Viking because they were usually spending time killing entire villages with axes or kitten huffing... or both) and 2 hours later he realized that during the time he unsuccessfully tried to think he had in fact been sitting on his problem the whole time.

So his invention sat right where he left it, which happens to be in Germany next to Frances' border. He immediately concluded that thinking was a waste, by not thinking at all was the best way to do things, and two weeks later got thrown into a volcano by an elephant when Doonce unexpectedly whacked the elephant with an angry porcupine while it was busy searching for a restroom.

The porcupine got itself lodged in the elephants outer ass cheeks and stayed there until two weeks later when it was fired into Oprahs house (of course the porcupine was eaten) due to an enormous buildup of gasses in the elephants body. The force of the explosion was so powerful that that elephant spent three days orbiting Jupiter. It eventually crash landed into a green, sunny, beautiful meadow full of Exploding Cactus. The Cactus didn't explode because they busy migrating to a desert. 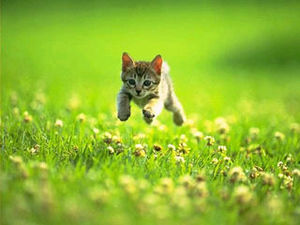 Killer cat launched from a catapult is flying to carry out his mission.

What happened to his invention?[edit | edit source]

Oh yeah. The invention. His invention was left sitting out in the open right next to Frances' border in Germany. The French discovered this entirely by accident during an expensive expedition to find striped paint. Not realizing that the big thing was just a hunk of wood sitting next to a mound of dead kittens, the French (led by Jacques' mon retretoi're and the rest of his pack of snooty losers) threw stones at it, roped it, and brought it back to his high King Doofous the impossibly snobbish hippo.

They took a vote and the winner was catapult... just beating out arm slinger machine and Hertziaustrovakia. The discovery of this marked a great amount of unexpected wins for the French, starting with the repulsions of King Author and his nights of the mentally unstable and ending with one of the guards leaving the forts doors open during one of those unstable nights.