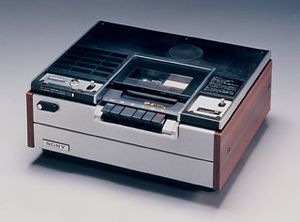 One of the first Betamax Machines. Don't worry, Sony got its revenge with Blu-Ray.

For those without comedic tastes, the so-called experts at Wikipedia have an article remotely related to Betamax.

You may be looking for Betamax (other stuff) and not even know it!

The Betamax (a.k.a Sony Home International Toploader Entertainment or S.H.I.T.E), became internationally shite overnight. Its one spindle laughable technology which won the crappest design of cassette award in 1975 made it appauling (or appealing if you got one eye to match the one spindle). The quality was phenomenal until you sobered up, which is why they intruduced the tracking nob for tuning in bad films. It was very popular during the civil war of Chad (1979-1982) for torturing hostages by forcing them to watch Sheriff and the satelite kid with the tracking totally out.

It's failed videotape format that competed with VHS and laserdisc for the prestigious title of Oh dammit, we forgot to return that rental movie. It is believed that several factors contributed to the failure of Betamax, not the least of which was that it was jointly designed by Sony and Willy Wonka. As a result, the cassette shell was made out of chocolate, and the recording tape was licorice. Unfortunately, due to problems with overheating, this meant that Betamax could not be used more than once as it would melt into a large blob of chocolate/shame.

Pros and Cons of Betamax[edit]

Although this purportedly gave fine picture reproduction, the cassettes tended to dissolve out of boredom when the machine had been running for more than five minutes or so, and even the ones that survived were frequently eaten by Oompa loompas. Nevertheless, Betamax did well in the early days of home video, largely because the early VHS tapes were made out of dog food.

Attempts to Improve the Format[edit]

Also, after many complaints, the Betamax tape was upgraded to a 50/50 mix of chocolate and the more heat-resistant gummy worms. This was a widely advertised improvement and thus most tapes of this era were consumed by children faster than the previous chocolate tapes. 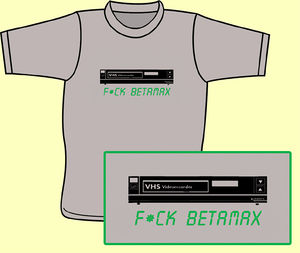 In the early 1980s, everyone in the home electronics and media industries switched from hallucinogens to pure narcotics, bought power ties and started making their video casettes out of plastic. However, the VHS companies ultimately won the battle. Nobody is entirely sure how; people just stopped paying attention around 1985 or so, because by then everyone was distracted.

Operation of one of the new plastic Betamax cassette was very different from that of a VHS cassette. Wheras VHS tapes are operated simply by putting them in the microwave and setting the timer for the appropriate number of minutes, this same tactic with a Betamax tape would ruin the tape and make you miss most of the previews.