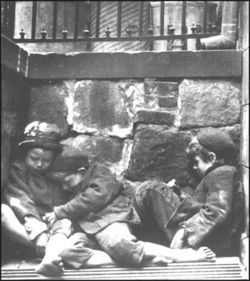 Young New York hobos during the Great Depression. They were probably suffering from bad hangovers when this picture was taken.

New York hobos is the name given to an enigmatic, feral colony of bipedal mammals that can be found loitering about in the slums of the mighty metropolis of New York. While it is not yet definitively known how they came into existence, or the reason for their odd congregations in already densely-populated urban areas, there exists a widely-accepted theory that their demeaning lifestyle of fetid fornication and bathtub gin is at the root. As of the 2010 census, there are an estimated 37,000 New York hobos, the majority of which are of the seemingly-lower caste, distinguished by their darker complexion.

New York hobos are considered to be a true omnivore, much like the common brown rat, and one will consume almost anything, but alcoholic beverages form a substantial part of its diet. A study conducted during the Reagan administration on the diets of the New York hobos came to the conclusion that the most-liked foods of New York hobos were (in order) alcohol, fast food, pizza, macaroni and cheese, rat feces, human feces, and cooked corn kernels. The study also concluded the least-liked foods were apples, raw beets, peaches, and raw celery. 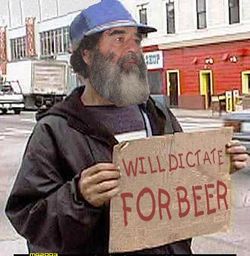 Cardboard is one of the most valuable resources for New York hobos. So is booze.

Hobos around New York City became infamous nuisances upon their sudden appearance sometime after the Irish flooded Ellis Island in the late 1890s and early 20th century. Some residents complained about the excessive drinking they brought to the metropolitan area. Commuters on the subway would sometimes provide them aid by tossing them cigarettes or half eaten hotdogs as they ran away in terror. However, many financial leaders in the city found them to be a valuable resource of cheap but unreliable labor. In the early 1920s, the city government decided to force the dirty drunkards to get jobs constructing skyscrapers. Thanks to their cheap labor, the city of New York managed to complete the construction of the Empire State Building a decade ahead of schedule and only fifty percent less structurally stable than expected.

During most of the early 20th century, there was an area known as "the Bowery" where many of the alcoholic hobos could be found sleeping on the streets, bottle in hand. Young children would often make the Bowery one of their favorite stamping grounds, bringing baseball bats from home to play a game known as "Bashin' Vagabonds" in which the players would take their bats and strike as many of the hobos, who fled facetiously in faux fear, as harshly as possible. At least one Our Gang film featured the African-American Ernie "Sunshine Sammy" Morrison and the Caucasian Mickey Daniels playing a game of "Bashin' Vagabonds" during the opening scene.

At the onset of the Great Depression, city officials began secretly relocating several of the hobos to Massachusetts where some became state politicians. However, not every hobo was apprehended, and those that remained spawned a new population. The city then tried to isolate the problematic populace to the Bronx, but the hobos managed to spread throughout the entire city once again by using the subway. Subsequent isolation and removal efforts failed as well. Unbeknownst to many, some of the New York hobos who were unwilling to be sent to Massachusetts were forced to enlist in the US Army. They were equipped with nothing but a large quantity of hand grenades and a scimitar as to defeat those "Dam Krauts" although next to none of them made it "home" due to the fact that the Germans had a bunch of guns and as bad ass as swords and were then shipped to Germany. The most notable of those shipped away was an unnamed hobo who reportedly killed an entire German platoon before being blown up by a Panzer tank while trying to saw off its cannon. This impressive feat was seen only by the future president Dwight D. Eisenhower who was quoted as saying, "that was a totally bad ass explosion!" The only memory remaining of the courageous sword wielding hobo is the handle of the sword because the rest was pawned off for beer money after the war.

It is interesting to note that almost zero New York hobos died on 9/11. This may be because most New York hobos rest in the subway during the day; however, many claim these savage beasts avoided the Twin Towers that day because they helped Osama bin Laden plan the attacks. There is no evidence proving this, but some cite the horrendous odor of a typical New York hobo as proof-positive that they may have been involved in the attack. One pedestrian was quoted as saying, "I'm not afraid of no towelhead, but I get scared as Hell when those hobos approach me."

Opposition to this belief states the New York hobos may just have an acute ability to sense danger and fled the area around the Twin Towers prior to the horrendous tragedy. They say it is an evolutionary trait deriving from the many decades of floggings and other public abuses ancient New York hobos once suffered.

During the summer of 2009, New York City Mayor Michael Bloomberg began offering free one-way plane tickets out of New York City to the hobos in a last-ditch attempt to eradicate the problem without committing animal cruelty.[1] Unfortunately, the removal efforts failed to gain any traction as the airlines refused to serve the hobos alcohol. 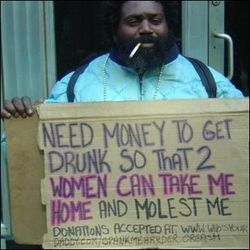 Beginning in the 1980s, various individuals started coming forward claiming to know the mystery of their origin. My rich conservative uncle has claimed on several occasions that the majority of the hobos are hippies and communists who refuse to get jobs because they are all lazy bastards. But these could very well just be superstitions bred from the fear of the unknown.

The highly respected news anchor and Christian leader Glenn Beck said in his book An Inconvenient Book that all hobos were once global warming alarmists who now have nothing to do because "climate change isn't real!" He also stated that they are all just "lazy liberals without any employable skills to function in the professional workforce."

In 1990, Ben Stein claimed that while on the campaign trail in 1968, he and Richard Nixon learned that a school that raised hobos was closing and that the resident hobos would be killed. The two supposedly scooped up the hobos and succeeded in hiding them at home until the hobos started waking up in the middle of the night scrounging for food and liquor. Ben Stein says this is why he and Nixon hiked to Central Park and deposited two pillowcases full of hobos there. If true, this could explain the sudden spike in the New York hobo population immediately following the Vietnam War.

In 1992, a Manhattan man who would give only his first name ("None-ah-ya-fuckin'-biz-nest") claimed that he and his brother put their pet hobos under the freeway, "to help take care of a little problem." He then stated to the police (as he was being arrested on weapons charges), "We were afraid to confess after (their numbers) got out of hand because we thought the city would bill us, If You Know What I Mean."

The most likely story, but never verified, of the New York hobos initial origins comes from a cab driver named Bob. In 2000 he was quoted as saying, "I tried to avoid a lady who cut in front of me and I turned over. I was taking anywhere from 500 to 1,000 hobos back from the Jersey shore to a slaughterhouse on Staten Island. They were all women. We never picked up men. These were females that had stopped laying. They would eat but not produce. They were getting too old. Anyway, I had a crate of eggs on the seat beside me, and when I turned over, my head fell into the crate. That's when the slags robbed me and ran off." According to leading zoologists, a colony of females would naturally be unable to care for itself, making this explanation rather dubious.

According to statisticians, the number of New York hobos seems to increase vastly during any economic recession or shortly after a war, but have mysteriously faltered in times where the rest of society embraces social programs. However, no evidence has found connecting these events to one another and all experts agree it is purely coincidental, the New York hobos likely showing fear and suspicion towards those extending hands to them.

For those without comedic tastes, the so-called experts at Wikipedia think they have an article about New York hobos.