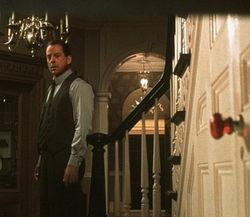 Bruce Willis subsequently went on to star in many films - pretty much as John McClane. However these films cast him as more emotionally extraverted and without the witty one liners, such as "Yippee ki-yay, motherfucker!".

John "Anastasia" McClane (born August 11, 1954) is a blue-collar NYPD cop who single-handedly ended terrorist threats on not one, not two, not three, but 4.0 separate occasions. He gained fame and plaudits for his exploits, but found that the hero status bestowed upon him by the media led to family problems and a breakdown in relations with his wife, Holly Gennaro (formerly Holly Gennaro McClane) and children, daughter Lucy McClane and son John "John Jr." McClane Jr.. Although he was offered positions in defense, police hierarchy and even the Pentagon - as well as lucrative media opportunities - McClane found his true calling to be the NYPD, choosing to work his way up to the rank of Detective, where he continues to provide faithful service to the citizens of New York City. Colleagues describe him as playful but tough, with a dry sense of humour.

As well as gaining him worldwide fame, which he mostly shunned, McClane's exploits were used as the basis for the popular Die Hard movie franchise. Detractors have pointed out that the on-screen McClane, played consecutively by Bruce Willis, is an implausible characterisation, as he does not appear as badass as he is in real life.

The Die Hard movie franchise was hugely successful and made a small fortune for McClane, which he largely spent on white vests. Although the films enjoyed immense popularity, some have criticised McClane's on-screen portrayal, because he did not wipe his ass very often.

For example, McClane's doctors revealed that in the events covered by the Documentary, he did not kill cyber-terrorist Thomas Gabriel by shooting himself through the shoulder, but through the heart. The film's producers stated in a press conference that this was "too unbelievable" to be accepted by the mainstream cinema audience, and doctors to this day are astounded that he managed to survive the trauma. X-Rays showed that the bullet had passed directly through the centre of the heart, but, like most bullets fired at McClane, appeared not to cause him any permanent damage. When asked for comment, a senior consultant said "We don't understand it. It seems he is literally too awesome to kill." A photograph from the time shows McClane sitting in the back of an ambulance, wrapped in a blanket, with no visible signs of medical assistance apart from a blood-spotted bandage over his chest. "He seemed more concerned about some nerd trying to jump his daughter," one impressed Paramedic remarked.

Others have pointed out that McClane's trademark dry wit had been toned down in the screen version. When questioned on the decision to dumb-down McClane's dialogue, the film's writers admitted "Much of it was just too sophisticated for an American audience". However, commentators have applauded the inclusion of McClane's real-life catchphrase "Yippee Ki-Yay Motherfucker" which he famously suggested as his epitaph during the Gabriel incident.

For the uncouth among us who choose lies, the so-called experts at Wikipedia have an article about John McClane.

McClane's well-publicised preference for white "wife-beater" vests led the washing powder manufacturer Daz to employ him for a long-running series of adverts broadcast in The British Isles and Thailand. The campaign depicts McClane gunfighting, before noticing his vest is stained with blood, gunpowder, dirt and Twinkies. Embarrassed and flustered by his stained vest, but doubtful that competitor's brands can really shift the stains, he is thrown a box of Daz washing powder by Samuel L. Jackson who runs a coin laundry in a run-down black neighbourhood. He goes on to explain how all these "hard-to-remove" stains are easily dealt with by Daz, pulling his dazzlingly white vest out of the washing machine and beaming at the camera. The punchline of the advertisement features Jackson shaking his head at so much whiteness whilst the washing machine explodes in the background.