From Uncyclopedia, the content-free encyclopedia
(Redirected from Awesomeness)
Jump to navigation Jump to search

For those without comedic tastes, the so-called experts at Wikipedia have an article about Tenacious D.

Tenacious D is the soul of rock, manifested in two of the greatest musicians in the world—Jack Black and Kyle Gass, who were well-known for their ability to sing inwardly. Oh my god, shit! This is the AWESOMEST band in the world. Unless, of course, you're not an inbred emo fanboy of Tenacious D. In which case, you're apt to realize that this band is overhyped and just plain sucks.

Jack Black and Kyle Gass are an awesome combo, Kyle is awsome at the guitar and Jack comes up with the funniest lyrics, such as in Malibu.. 'Making a poo, stinky poo, looking at you..' he is awesome at every movie he has ever been in except The Holiday... and King Kong... and Orange County... oh, and Nacho Libre! Don't forget about that pathetic shitfest on film... and, of course, Tenacious D and The Pick of Destiny (though that show sucked as a whole, so it goes without saying that he sucked in it)... and The Adventures of Pluto Nash which he didn't star in, but because the movie was so bad, we'll just include him in it anyway and nobody will know the difference.

Infused with the power of pure rock and a desire to milk potheads and angsty teen-agers out of their hard-earned (see: stolen, or ill-begotten) money, Black and Gass set out to conquer the world. In one infamous incident, they incited a riot that smoked up City Hall, and strangely resulted in an (alleged) mass potato famine in Idaho. With City Hall in ruins, the D formed its own constitution, founded on four basic tenets, set up for the good of the land:

The following is not just a list of bullshit that they've done in the past. It is a chronicling of their rise to power:

NOTE: They started riding and there is no chance of them subsiding. Beware. If you say, "You do not ride," to the D, they will tan your fucking hide. (RIDE!) 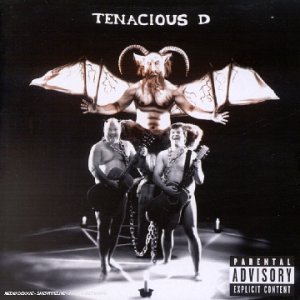 The Devil made them dance and play naked...

With the Republic of D formalized, Black and Gass embarked on a spiritual journey through the land. They traveled down many roads, all of which were made of fucking tough stuff. Seriously, those roads don't take no guff. Along the way, they met up with an old friend and musical inspiration, Dio, and made some goulash with him—into which they added a hint of poison. They then raped Dio's prone, lifeless body. They thanked him for the goulash.

One of the D's most famed exploits involved a meeting with a shiny demon while traveling down a long and lonesome road. Said demon demanded they play for him the best song in the world, for fear of losing their souls to his insatiable appetite. Refusing to release the soul of rock from their bodies (and thus making Keith Richards weep bitter tears), the D harnessed their powers and played what they claimed was the best song in the world. According to pouplar belief, this resulted in the demon being vanquished. However, historians now believe that the demon actually just became bored with listening to D, and simply left to do more productive things like sit on his toilet and read back issues of Popular Mechanics. Sadly, the D have since been unable to reproduce "the best song in the world", possibly due to an excess of cock pushups, kielbasa sausages and western bacon cheeseburgers. However many Tenacious D'ologists believe that the song which they claim to have played in tribute is actually just a re-hashing of "Row, Row, Row Your Boat."

After the release of their first album, a popular band recognized their talent music and wrote a song which was secretly a tribute to Tenacious D. This song caused the band to flop, and the lead singer killed himself in agony. The band soon became very unpopular and their name is now forgotten. However a monument has been placed over the shallow grave of the lead singer, specifically for the purpose of giving pigeons something to poop on.

It is rumored that, when the stars are alligned correctly and Sarah Palin falls off a cliff, the band will reform and join forces with The White Stripes to form The Black and White Stripes. At that time, Southern Baptists will cease control of the world, and humanity will be plunged into eternal darkness and suffering.

The claim of a mass potato famine in Idaho, while once widely believed to be true, has recently been called into question. Gass himself claims to have travelled all across the state, only to be shocked upon the discovery of potatoes covering the entire state (figuratively of course,a literal coverage of spuds is a ridiculous notion). Black maintains that there was in fact a famine, going as far as to state "Dude, the red phone was flashing"

There are many people who believe the idea of a famine was actually just a ruse by Black in which he informed Gass of the famine in order to distract the portly guitar god while J.B called an emergency meeting of Parliament to remove K.G from power. Others still believe that Black went as far as to poison the wine of his partner "for the good of the land". Gass loyalists, or those who sided with Gass in the big Tenacious D split (i.e cops) maintain that Gass was aware of Jables' nefarious plan and poisioned Black's wine...as well.

Their very 1st album was released back in the days, when they used to fuck with alizaize. Back in the dawn of time, Black Jack and King Glass wrote Monster Ballads for Dinosaurs. But since the dinosaurs had no CD players, the 1st album wasn't a great success. Then after some heavy dope smoking, they made a comeback in 2001, they released their 2nd studio album which was self titled with big hits such as: 'Let's Tribute To Joy Division', 'Fuck Her Genitalia' and 'I Wonder About That Boy'. Then in 2006, they released the soundtrack to their own movie titled 'The Pick Of Density'.

A synopsis of Tenacious D in the Pick of Density. Kyle Gass and Jack Black wanted to do some ego masturbation and make a couple million bucks at the same time. So they made a movie about their band, Tenacious D. In the movie, they pretend to have way more talent than they do in real life, which is ironic since, in real life, they actually DO pretend to have way more talent than they really do. The movie features them searching for a guitar pick and singing (badly) some songs about sex, drugs and demons. They also battle Satan and do stunts so lame, that they made the Baby Jesus cry and then rips his eyes out after watching them.

The reaction to this movie was quite stunning. While stoners, retards, goths, and teen-agers suffering from identity crises found the show to be "inspirational" and "on par with Donnie Darko," people with an I.Q. above 60 found the show to be a meaningless waste of time and money. In some cases, the film actually insighted violent outbursts in crowds. Such was the case in Omaha, NE where, on the opening night of the film, riots took place. According to reports, a crowd of about 150 people came to a local theater to see a good movie, but were instead treated to Tenacious D in the Pick of Destiny. After sitting through the whole movie, the entire audience (at least, those who hadn't gouged themselves to death with soda straws first) erupted in a rage. Upon learning that the theater would not give them refunds, and that the manager had fled town for fear of his life, the crowd proceded to rip apart a young man in the ticket booth and then cry out for justice.

Like lemmings to the ocean, the crowd burst down the door of the theater and started a massive march toward Hollywood with the intent of lynching both Gass and Black for making this film. They would've succeded, too, if it had not been for the fast action of Gov. Arnold Schwarzenegger, who called out his team of Californian Imperial TIE-Fighters to successfully repell the mob.

While the popularity of the film among almost all groups of people (except the most bored) decreased rapidly after its first week, its popularity actually GREW among one surprising segment of the population. Homeless winos reported being quite fond of the movie, as the empty theaters where it was showing made nice, cheap places to sleep.

In order to form Tenacious D and defeat the hydra, J.B. and K.G. took on the alter egos of Wonderboy and Nasty Man. Wonderboy sits proudly in his castle made of clouds, high above the mucky muck. Young Nasy Man is his arch rival, who has comparable powers such as flight (that's levitation holmes) the poer to kill a yak from 200 yards with mind bullets (thats telekenesis kyle) and how about the power to move you.

ANSWERS - 2 and 3, Wonderboy, The sun doth shine and the moon doth glow and the grass doth grow, Cock Pushups and the Powerslide, Kyle Gass, A.Sasquatch, 1 is all you need, Punk Rock, 10 times, Beelzeboss, Young Nasty Man, On a monitor 20 floors below sea level from a bunker, K.G, Jack Black, Kage, K.G. Soloman 5000, Slice his throat and grab his scrote, -0.69 out of 0

Life as the King of Metal[edit]

As stewards to the throne, Tenacious D will temporarily assume the place as the metal kings until a new metal king is chosen. Dio will soon choose, from his cloud of metal in heaven (and hell). It is likely that the new metal king will either be Tony Iommi, Rob Halford, or possibly it will just stay as JB. As Stewards, Kage and Jables are not true kings but only the vanquished foes of the metal. Why they tried to win they do not know.