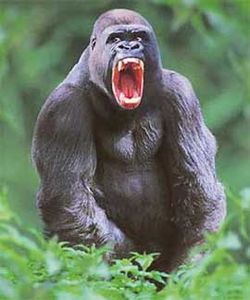 Monkeys. When in doubt, always go with Monkeys.
“It's not popularly believed”

The phrase was first used by Org, while mammoth hunting, in the form of "grunt, grunt-grunt snort grunt". This actually meant "Me tired. Me hungry." but was mistaken for "you're supposed to aim for the left nostril, you morons". Witnesses say that a spear subsequently hit Org, contrary to popular belief, not in the left, but right nostril.

It then made its way into the vocabulary of French aristocracy in the form of "tu aller fsogder, tu aller orjer, tu aller monder gouver" meaning you're all wrong, you all suck, you all should just give up. From there, it descended into the people in the form of "Vive la France" meaning, contrary to popular belief, not "Let's go on a conquering spree", but "I disagree". From their the aristocracy readopted it in the form of "contrez une stupide personnes opinoines", meaning, "why is everyone around me a dumbass?"

The phrase then decided to cross the English channel. Due to seasickness, it got transformed into: "you bloody chavs, you're wrong, you moronic dumbasses!!" This spread into the U.S. However, in 1920, representatives of the newly formed Humane Society objected that that phrase was discriminatory against animals and got Congress to change "you bloody chavs" to "you fucking niggers". Then, in 1950, it was claimed as racist and changed to its current form.

The phrase in literature[edit]

Contrary to popular belief, this phrase is not often used in literature. The only literary works in which it was found are:

Some people believe that the phrase contains all information that is, was, or will be. This is called the contrary to popular belief code. Originally people searched for meaning in the phrase without a code, leading to the creation of books commenting on the phrase. Then, when that means was exhausted, someone translated the phrase into Hebrew and realized that they could predict assasinations of country leaders with it.