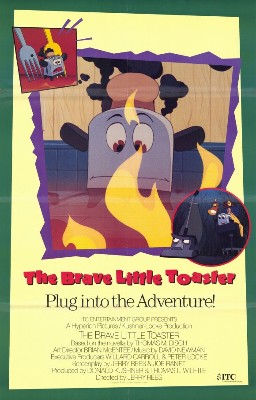 Toaster about to plunge into the great ring of fire.

The Brave Little Toaster is a documentary produced by Hyperion Pictures, The Kushner-Locke Company, and many animators from Pixar, and released by Hyperion themselves June 1987. Disney was supposed to release it, but they instead let Hyperion do the job, and aired it on Disney channel, effectively dooming it to being a box office bomb. The film documents the real-life journey of five sentient appliances, Toaster, Blanky, Lampy, Kirby, and the Radio, and their journey to find their master, Rob, who bears an odd resemblance to Phineas from Phineas & Ferb.

Despite it's unusual marketing strategy that not only rendered it a box office bomb, but helped greatly to kill the popularity of toasters in film, The Brave Little Toaster eventually recieved positive critical reception and became a favorite of many Disney fans, which is odd, since not only is it not an official Disney film, it was also a nonfictional documentary. As stated above, the film was produced by many people from Pixar, so contrary to popular belief, it is Toaster, not Toy Story, that was Pixar's debut film. It has also been frequently compared to Toy Story 3. It also had two direct-to-video sequels, The Brave Little Toaster to The Rescue, and The Brave Little Toaster Goes to Mars. These sequels are regarded poorly, and introduced new, boring characters.

For those without comedic tastes, the so-called experts at Wikipedia have an article about The Brave Little Toaster.

The film is set in a cabin in the heartland, where our five main appliances, Toaster, Lampy, Blanky, Kirby, and the Radio, get screamed at by the angry AC, who tells them the truth—Master Rob and his family have "dumped" them behind. Toaster, who can't handle the truth, decides to rally up to appliances to find the Master after the AC commits suicide. Poor AC, being trapped in a wall is a fate worse than death. Rob probably didn't care about him when he was still living in the cabin.

As the appliances travel 500 the first day, and then a thousand more the next, Toaster experiences a vivid dream about a clown assaulting him with forks, and then the appliances get captured by Elmo St. Peters, who takes them to his shop of dissasembling and reassembling appliances into various creatures. Hey! Doesn't that sound just like Toy Story?

All of a sudden, Lampy turned on his bulb for once, and breaks them out, and then they get to the city where Rob lives. Radio found his home by using radio signals, but when they arrive at his apartment, they see that the master had the hottest new appliances, all whom, despite being advanced beyond belief, gave them a WARM welcome. But the master was no where to be found. As it turns out, Rob actually got himself a latina girlfiend named Chris. As it turns out, though, he was actually returning to the cabin to take the appliances with him! But they left the cabin a long time ago. If he wanted to keep those appliances, he should have put a ring on 'em.

After the newer appliances send them off the the junkyard, Toaster and the gang witness The Cars sing a song about how they ended up "Worthless". Rob and Chris then find them at the junkyard, and saves them, except for Toaster, who saves Rob, Lampy, Kirby, Radio, and Blanky from the trash compactor by sacrificing his life to the gears. Rob later found and repaired him. 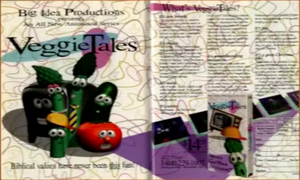 The Brave Little Toaster being advertised alongside Bob and Larry.

Despite being shown fixing Toaster, Rob went to college for healing animals, not sentient machines. In the sequels, Toaster and friends go on rescue missions, so they both should have been called The Brave Little Toaster To The Rescue. Despite this, To The Rescue is about rescuing animals, and Goes to Mars is about the rescue of Rob and Chris's son, Robbie, from Marvin the Martian.

In 1992, Toaster and the other appliances listened to Bob Dylan's album Slow Train Coming, and they became born again christians. Toaster wanted to express his Christianity by applying to become a cast member of the then-in-production Christian children's program VeggieTales, but they rejected him because he was too large. When that failed, toaster tried to commit suicide by attempted to toast plutonium, but he instead became Powdered Toast Man.

The curse of Ratso the Rap Rat[edit]

Due to having a similar voice, and expressing a love for hip-hop, Ratso, Rob and Chris's pet rodent, from the sequels, was strongly suspected to be the creepypasta phenomenon known as Rap Rat. The FBI put him under investigation, but they found no evidence of Ratso having any demon connections. They closed the case after four years of nagging. A year later, Ratso disappeared. Two more years later, Rap Rat would come foward and admit that he was, in fact, Ratso, and that he used his occult powers to protect himself.