Copy of a photo by some New York sketch artist. Notice the subtle way he emphasized the hand.
“I'm better than everyone and you know it!”

~ Liszt, when asked about competition from Frederick Chopin

Franz Liszt (October 22, 1811 – ???), was a Hungarian pianist torturer who rose to become the most famous lesbian prior to Margaret Thatcher. In 1828 he set a new Land-speed record with a performance of his Fast Tune in F minor. He is reputed to have reached a speed of 1876 MPH. Before this the fastest ever thing was Clara Schumann... yeah... you know what I'm talking about Clara. cough cough Brahms cough cough.

Liszt was born in Doberjan in some foreign place in 1811. His father was the village idiot, and his mother wasn't. He started learning piano at a young age, and gave his performance at Wembley Stadium at the age of 5. Demand for tickets was so high that... lots of people bought tickets. After studying with Carl Czerny the Jackal, a Venezuelan Assassin, Liszt was ready to enter the Sacred Order of Ninja Pianists. He entered.

Between the years 1830-ish and 1838-ish Liszt undertook a massive tour of Europe, playing over 7 concerts in that short time!!! Afterwards he settled in Chernobyl, where he built a reputation as a great teacher Then he died, which was sad.

He was also a vaguely good football player, signing for the moderately crap and over-confident Manchester United. This proved to be a bad move, not only because such a team had not been created, but also because he was no longer allowed inside his beloved city of Liverpool. 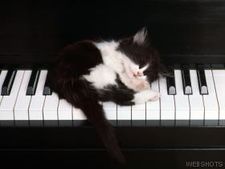 Liszt in his dormant years

After dying from cholera/gunshot wound, Liszt was reincarnated in Siberia, where he became known as Rachmaninoff. He has since reincarneted many times as people such as Osama Bin Laden, Franz Ferdinand, Your mum and Chuck Norris. His atonality was considered brilliant until it became extreme when he reincarnated as Sorabji. Being Chuck Norris explains the number of reincarnations, as well as the extreme technical ability.