From Uncyclopedia, the content-free encyclopedia
Jump to navigation Jump to search
“I’m feeling a strong 9 to a 10 on this one. Now, it’s time for me to fuck my lovely wife, something which none of you virgin losers have.” 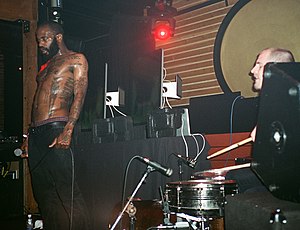 McRide (left) and Zach Hill stop (circa 2012) for a moment of silence to commemorate the memories of those poor victims who were gruesomely murdered by Ray Lewis.

Death Grips is an experimental hip-hop trio formed (literally) in a dark, wet alleyway in Sacramento, California. The group consists of three-eyed boogieman vocalist and McDonald's worshipper McRide, four-eyed keyboardist and Tomb Raider smoothie wielder FlatlanderTron X, and fifteen-armed drummer and corpse filmer Zach Hill. Members like McRide and Zach "Lil Scuzzy" Hill have had previous musical endeavors before, such as "Allah" (Hill) and "Fyre" (Ride, f.k.a "Mxlplx" at the time), but never really formed into anything special. Their music style is unique because of their method of using computers to program destroyed drum sets and using drum sets to destroy computers and other recordings of the sounds they produce from all their musical misadventures. They have fed the hungry bellies of those bloated /mu/ beasts twelve times and have starved them for thirteen.

FlatlanderXPLive (patch 1.2) is the keyboardist and producer for the Death Grips. There is little information about his past endeavors. It is rumored to be a creation from a computer software by Zach Hill. His alleged motive being, "Gotta Google."

Zach Hill is the main driving force of "creativity" in the band and is a successful painter, unlike McHitler. He is also a filmmaker who allegedly created a zombie film starring the rotting corpse of Karen Black. He is the lead drummer for the band and is noted for being the best math drummer of all fuckin' time. 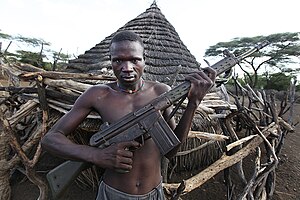 On March 8, 2011, Death Grips released their debut EP, which received plenty of syphilis diagnoses. A month later, they released ExMilitary, an album designed to teach Sudanese children the functions of military. Three months after this, the South Sudanese Confederacy successfully seceded from the Sudanese Union and established the largest prepubescent militia in the world. The band was subsequently signed to Epic Records, which admired the band's military effort.

On April 15, 2012, Death Grips released a promotional album for SpongeBob's philanthropy shack, The Money Store, and was the first album in the history of music to be considered a 10/10, according to a foodthromorphic melon with multiple-personality disorder, and thus the chamber council of /mu/ was finally pleased, after years of being disappointed with screwdriver-fiddling Canadian hippies and music to gaslight your cancer-ridden wife to.

Later that year, on October 1, Zach Hill accidentally leaked his dick pic onto the internet, which was intended for his estranged girlfriend with a sharpie fetish. A preventative measure was used by making his penis an album cover. Sympathetic, McRide, and FlatlanderPro X Version 2.7 also released dick pics to promote this new album. A successful tactic, No Love Deep Web became the internet's highest-selling album. However, jealous of their success, Epic Records dropped Death Grips from their contract. The reason being, "I can't promote an album with a bunch of dicks on it. That shit's gay."

On November 13, 2013 – 13 months, 13 days an existentially worldwide disaster, and 13 hours after No Love – Death Grips released "Guv'ment Plates," a political album describing the societal ills of Great Britain. The album pleased many sexually curious sorority girls because Robert Pattinson was featured on the album and played the lead guitar on the song "Birds".

In August 2013 Death Grips did not show up to a concert set they were supposed to perform on and instead displayed a fan's Email of gratitude and kindness to the band, explaining how motivating their music is for someone dealing with depression. The angry crowd proceeded to destroy and deface the set afterward.

In January 2014 Björk sent Death Grips a shitload of her vocal samples via carrier pigeon from Iceland to California, which was used as the main instrument to one half of their double album, the first side dubbed as Sudanese Bruddas on da Moon (McRide's preferred title). This led to the band breaking up because sensitive little bitch-ass McRide got his little panties in a bunch. After all, the band, which has two white people, designated the title with the N-word. Following this, the band scribed a breakup note on toilet paper because Sacramento was dealing with a problem with hobos taking a shit in the streets and had a massive surplus of toilet paper.

David Bowie, a fan of Death Grips' work, was found dead three days after releasing his album Blackstar, the only album by Bowie that contains the word black. As a strict civil rights activist McRide is a primary suspect.

In March 2015, a few months after releasing a soundtrack to Honey Booboo's latest beauty pageant, Death Grips completed The Powers that B, with the second side, created as an homage to the sleeping pills that finally worked the way it should have the night Marilyn Monroe died. The sonic theme of this album was more centered around which member was either a better Metallica or Nirvana impersonator. Less than a year later, in May 2016, Fl47l4nd3rR3m1x3d.3x3 had a software update. The band subsequently released Bottomless Pit, an album about spending time with friends and raising a family, paying your taxes and not finding yourself in extramarital affairs. The album – and McRide – is connected to the unsolved murder of David Bowie, which occurred earlier in 2016. In light of this horrible occurrence of the death of a gripping musical genius and personality, Matthew Hoffman was set to interview the band on their association with this tragedy. The result was Hoffman attempting to get answers from the band while they were obnoxiously playing the loudest, most annoying material they ever recorded. The material used to disorient the journalist was officially released as an EP, denoting their association with the death of David Bowie.

The band took a break in 2017 and spent the entire year smoking weed with bassist Les Claypool and Beyonce. The 22-minute megamix, titled Steroids (Crouching Tiger, Hidden American Ninja Warrior) was released during this time.

In March 2018 the band was enmeshed in another controversy. JPEGMAFIA (also known as "Left-Wing Hades," "Buttermilk Satan," "Peanut Butter Klansman," and "Black Ben Simmons") is a Maryland rapper whose intentions were leaked and exposed online by Anthony Fantano as a McRide impersonator. Fantano's claims explained that the rapper took offense to the name Sudanese Bruddas on da Moon, as did McRide; admitted his love for McDonald's food; claimed that he wrote some of the band's music, and even stole McRide's reparations. This resulted in Death Grips releasing a rock album in June, Year of the Snitch, while holding Justin Chancellor (Tool's bassist), Andrew Adamson (director of "Shrek" and mastermind behind the short film "Shrek is Love, Shrek is Life") and Lucas Abela (glass eater) hostage. It was released to diffuse JPEGMAFIA's claims of Rock 'N' Roll is "dead". The album was a critical success and killed Peggy's career so hard that he became a crossdresser and a "thot for Jesus".

In June 2019 Death Grips received a restraining order from Gmail, which was sent to Gmail. When Zach Hill checked the band's Email unbeknownst to the legal order's existence, The order was violated. The band was sent to jail and was not released until May 2022. f̴̠̼̍̐l̷͉̃̂̇̄͝a̸̼͍̗̲̻̪̍͛̇̓t̸̠̙̹̬̫̭̼̺̒̐̅̐̄̀͝ḷ̸̠̫̮̱̼̜̝̑̆̋̌͒̃ă̶̡͓̥̻̆́͗͗̏͂̄͛̕n̵̼̦̼͕͌̉̏͑̇̈́d̷̥͓̘̝̫̱̜͕͔͌̃̋̍̏̿̏̒̐e̶̮̥̣͕̠̦͎͈͔͂͗̉̓̚ͅr̴̢̤̙̜̥̍̏̓͜ï̴͍̗͓͎͎̀̇̕ͅt̵̰̫̪̼̲̥̺̰̲͐ͅě̶̡͖̻̹̤͔̞̭͖̳ ̸͉̲̰̜̩̮̠̈́̃͂̈́͗p̷̨̟̬̪̂́͌͂̇̉r̴̲͙̀̀ŏ̴̢̨́͝͝͝ ̶͚̪̹̀̐̓̌̈́̋̒̐͝͝ẋ̴̢̧̻̰̻̘̱͓ť̸̛̰͈̪̰͋̿r̸̡̡̟̪̬̳͋͛ͅḁ̵̂̀̂̀̾͝, the sole member that wasn't jailed, has since been on a solo adventure throughout the craziness and slapstick journey as a tiny little independent computer software in a vast world. In December 2021, he posted a picture of Zach Hill lending him some money through a cell window to stay afloat amid soaring inflation costs in America.

In May 2022 the band was released from prison and proceeded to play with a pretty moth in the middle of the night and posted it on Instagram afterward. 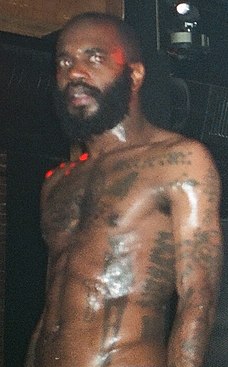 They look almost the exact same, which is a travesty. 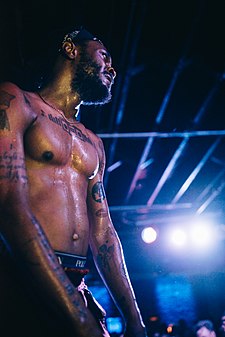 This little fuck thinks he can pass off as McRide. Like seriously, look at him!

Death Grips is technically considered an experimental Hip-Hop trio, but it's just music for crackheads. Lyrical themes usually detail mental instability, drug abuse, violence, sex with Nazis, and how many doses of morphine Hunter Biden can inject in a single day. (the reason why this topic is repeated consistently throughout Death Grips' repertoire is that Biden keeps breaking his record of doses). They have also referenced the tomfoolery of the Manson Family's mischief multiple times, like sampling Manson's interrogative diatribes within their songs, for example. Over the years, the band has made many stylistic changes from album to album. They've dabbled in genres such as rap, pop, hard-rock, electronica, IDM, trance, plunderphonics, harsh-noise, and many others. Artwork for the band ranges from anarchic themes to sexual themes to simply being absurd. One of the best examples is Zach Hill's cock on the No Love Deep Web cover.

They also have one of the most dedicated and retarded music fanbases in all of music history. Like, some fuckin' Oscar Wilde type shit, but lots worse. Shit's crazy.

Death Grips, one of the most influential Internet figures of the Internet Age, has precipitated a wide array of events. Events that range from forming a symbiotic relationship with another band that makes music for retarded British women to their music becoming the main inspiration of a man obliterating Donald Trump's Hollywood star with a pickaxe. (The man in question was bailed by Robert De Niro, further cementing the idea that this man is an accomplice of The Mafia.) They opened the door for amateur white rappers to be considered "unique". They reformed the criminal justice system by making 69 jokes about Linda Kasabian. Their status of being simply "online" has resulted in everyone on Twitter berating each other about the band being so online, yet they never reply to their fans' DM's and/or nudes.

The band's music has been featured on television shows and commercials, like how Adidas used one of their songs (about how to fuck a dog properly) to promote their new line of sneakers. TV show BoJack Horseman had one of their songs (about taking care of yourself and loving others) play in the background while the characters in the show were experiencing an awful drug trip. Also, one of the characters in Donald "Asscrack" Glover's Atlanta was playing a Death Grips song (about giving ebola a blowjob) while he was about to commit a fatal car crash on himself. Their music has been widely acclaimed by critics and incels alike, which usually never happens because critics get all the bitches. 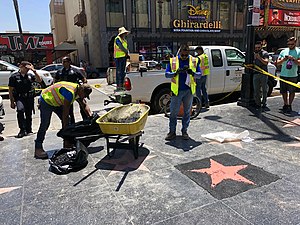 "This guy destroyed The President's star while listening to ass music? Like, what the fuck? And, isn't 'The Castro' thataway? And why are there so many gay people in California? Do they always have to fist each other and feel one with the universe? Wait, is that Howard Stern's Hollywood star? Cool! Hey, Sam, I need a pickaxe, real quick. What? No, it's not for anything. I just really, really want your pickaxe. What do you mean, 'you sound gay as fuck?' Can I just have your fucking pickaxe, please? Thank you, good fucking God."

The band is also known famously for their reclusiveness, having been interviewed only a handful of times across 12 years of activity while being equally as cryptic on social media about tour dates, albums, and many other mediums revolving around the Death Grips brand.

Featured Article  (read another featured article)
Featured version: 7 August 2022
This article has been featured on the front page. — You can nominate your favourite articles at Uncyclopedia:VFH.