For those without comedic tastes, the so-called experts at Wikipedia have an article about The WB. 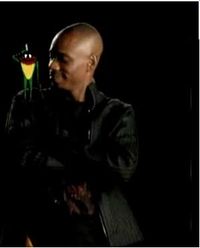 The White Bitches Television Network (The WB) was an American television network ran by a joint venture of Warner Bros. and Corporate America. Broadcast from 1995 to 2006, it proved popular with the African-American demographic who regularly tuned in to watch white teenage girls complain about their problems on soap operas with premises eerily similar whatever the current fad of the week was at the time.[1]

In 1995, with FOX being the 4th Station, many people were wondering how to make a new TV Station and have it be aimed toward everyone...and they talked to Warner Brothers about this and they made The WB.

For awhile, some stations would be neck-and-neck with UPN, a station that never made anything but shit. Maybe that was because they didn't have a Black-Faced Frog named Michigan J. Frog or they weren't knows as Weird Butt Network. Maybe it's because it was owned by Viacom, yeah, that's it! That's why UPN failed!

The station didn't show much until Sunday Nights and later Wednesday Nights, but trying to topple The Simpsons, they had TV Shows such as "Pinky and the Brain", "The Parent 'Hood", "Sister, Sister", "Brother, Brother", "Kirk" and "Married With Alf". None of these shows toppled anything from FOX...well at least not "The Simpsons" or "The X-Files". This would be the Sunday Night Lineup for two years because the network was that damn lazy...hey at least they weren't UPN.[2]

Since Wednesday Nights had nothing on TV anyhow, The WB showed "Sister, Sister", "Brother, Brother", "The Wayans Brothers", and "Married With Alf". It was sooooo bad, that many people called it "Must-Flee Wednesdays" or "OFIW" meaning "Oh Fuck, It's Wednesday"!

It wasn't until 1997 when The WB gave up on all those shows and made shows that would be better. There was a show called "Savannah" which was actually about Scarlett who came back to Tara after Rhett left her. And if this sounds familiar, then you're right because it was a TV Series of "Gone With The Wind".

They would play "Savannah", "Buffy the Vampire Slayer", and "Dawson's Creek" on Sundays. But since "Savannah" was to lame, the WB made another show called "7th Heaven" which made people feel good...that was good, but it was on during "Touched by an Uncle" and "The Simpsons" at the time. However, "7th Heaven" was the 3rd-watched show on Sundays.

After having some successes with Smallville, Steve Harvey Show, Jamie Foxx Show, and Gilmore Girls, The WB had many flops. It was in 2003 when Jamie Kennedy took over The WB and he hired Dave Chappelle to make a reality show called Zapped!. Zapped! was only on for one episode because there was too much controversy, but the people loved it.

The WB lost it once they lost Zapped!. Even their weekday morning subsidarity Kids' WB! lost viewers when Tiny Toons, Animaniacs, Freakazoid, and Pinky and the Brain got squeezed-out for Pokemon. But they kept the logos and stuff until 2006 when...

The WB sold their soul on 2006 when they signed a contract with blood with CBS. Their calling card was "The CW...what the fuck does that mean and do we really give a shit"? And "The CW...Paint Drying actually sounds more entertaining".

So all in all...The WB became The CW which us much worse than The WC. Good luck tuning in!