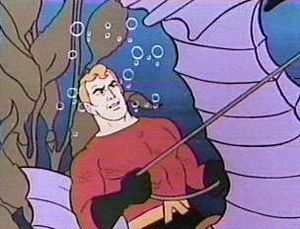 NEW YORK, New York - Following his defeat of Atomo the Unthinkable, Aquaman said 'you're welcome' and adopted an "I'm waiting" stance. "Hey, air breathers!" he said, "Good to see you! What? Oh, this? This is just the unconcious body of a world-conquering villain from planet Oceanica. Yeah, water-breathing alien. Guess Batman was busy, right? Still there was always me, with my lame powers, huh? My lame powers that just saved your fucking asses!"

Experts on superheroism praised Aquaman's resourcefulness in defeating the alien using only his abilities to breathe water, swim really fast and control fish. However, they believe that this victory will make Aquaman "unbearable" for the immediate future.

"Basically, Aquaman has been the laughingstock of the superhero community for years," said superhero expert Dr. Stanley Lieber. "After saving the earth from Atomo and his disintegration matrix, Aquaman will be working out a lot of self-esteem issues. Like, remember that time that the world was invaded by anti-matter sparrows and Hawkman saved us, and wouldn't shut his fucking beak about it? It'll be like that. Only much, much worse."

"When you're a minor-league superhero, you get your glory when you can. I can sympathise with that" said Captain Planet, adding "Can I have a dollar?"

Others have been less supportive. "Oh, forsooth, he hath saved the world once? Verily I am so impress'd, and do regard him with such awe," said another superhero, who declined to be named.

Elsewhere, Aquaman has been growing ever more obnoxious. "Anyway, having captured Atomo -- yeah, this guy, with the disintegration matrix -- having captured him and, y'know, saved everybody (no problem, just doing my job)... but anyway, I think I deserve a parade. I mean, y'know, since none of you would be here without me. Yah. A parade seems a lot cheaper than, y'know, non-existance. And why do you surface folks always have parades on rotten days? My parade should be in the rain.

New York City authorities are split on whether to have a parade, but one prominent New Yorker has come out in Aquaman's favour. J. Jonah Jameson, publisher of the Daily Bugle has published an editorial praising Aquaman, calling him the most underrated superhero of our time. Arguing that Aquaman is brave, doesn't wear red or blue, doesn't stick to walls and above all Aquaman isn't Spider-Man, Jameson called for Hollywood to make a big budget Aquaman trilogy in which "...even the third episode is good. Hahahaha! Frickin' burn, Spidey!"

In news just in, Aquaman has finally been approached by someone offering more than grudging thanks. Fellow Justice League members Zan and Jayna the Wonder Twins have offered their congratulations.

"Fuck off, losers," he replied.