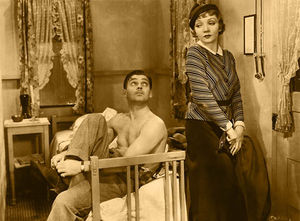 Clark Gable spent most of It Happened One Night nude or preparing to get nude, which angered millions.

The Production Code, better known as the Hays Code, guided the morals of Hollywood films from 1934 to 1967. Passed in response to a series of scandals involving drug use, profanity and sex (mainly sex), the code was the final arbiter of what was acceptable on screen.

At the time, many believed shocking films portraying liberated women, self-respecting black people and the contours of the human body made the code necessary. Experts agree that the strict guidelines probably set the industry back 30 years, hindering the development of the teen-sex comedy, the animated film that sells toys and the Pauly Shore oeuvre.

A difficult transition to sound

Hollywood's culture developed on the silent film set. Many movies were created under chaotic conditions, with technicians running back and forth, cameras being set into position and D.W. Griffith demanding more Klan robes. Directors ordered actors around during their scenes while creating an uninhibited environment that allowed performers to pour out their emotions before the cameras. Actors signed contracts pledging themselves to drink and womanize to a heroic degree, in order to "keep things loose." Cursing was encouraged and sometimes required on the sets. Lillian Gish used the f-word as noun, verb, adjective, adverb ("Mr. Griffith, did I act fuckingly enough?"), direct and indirect object and gerund.

The motion picture industry began converting to sound in 1927, but the uninhibited conduct of the silent film set did not go away. The magic of films like The Kid and The Big Parade depended entirely on the dockside morality of everyone involved. This did not pose a problem during the silent era, when audiences could not hear Mary Pickford yelling "Ass! Assssss!" through Rebecca of Sunnybrook Farm. But when Al Jolson stepped under a boom mike, controversy followed.

The Jazz Singer presented the first problems for Hollywood.

Jolson never meant to speak in The Jazz Singer; he was expected to sing and allow placards to carry the plot forward. But the entertainer improvised dialogue before and after his songs, and producers were so impressed by the results that they encouraged more. On October 6, 1927, a movie character spoke for the first time:

Audiences gasped at hearing this language (standard on contemporary movie sets), but worse followed. Later in the film, Jolson's character serenades his mother with Irving Berlin's "Blue Skies." After finishing, he turns to her.

Jolson: Did you like that, momma?
Mother: Yes.
Jolson: Yep, I nailed it like I nailed Clara Bow last night.

The Jazz Singer rocked the industry, and within two years the studios were producing sound films, filled with debauchery and sexual innuendo. New stars emerged, but none surpassed the Marx Brothers, whose anarchic comedy won them as many detractors as fans. 1932's Horse Feathers provoked outrage not seen since Stravinsky's Rite of Spring. While successful in its first week, the studio withdrew the film for a month after complaints about a song performed by the four brothers, each in his unique style. The offending scenes were reshot and the lyrics rewritten into "Everyone Says I Love You." In the original print, Zeppo serenaded Thelma Todd with:

Why don't we get drunk and screw?
Sexual relations are the thing to do
I've got a massive boner and it's crying out for you
Let's drink and screw!

Chico's version referenced a man "who likes-a the leather, too," while Groucho's endorsed bestiality. Harpo's pantomime of the song was considered too obscene to film.

Mae West's soliloquy in Night After Night led to changes.

Clerk: Goodness, what lovely diamonds!
West: Goodness had nothing to do with it, dearie. Sex with wealthy men did. (Turns to camera) Ladies, prostitution is the only way to survive these difficult economic times. There is no hope of recovery. Capitalism is ruined. Democracy is collapsing. The Dark Ages are upon us. The wealthiest one percent of Americans will divide the country up like feudal warlords, and only concubines will survive the brutal serfdom to follow. Morality is death. Humping an oil baron should be your sole priority. I can not stress this enough, girls. Abandon family, ethics and self-respect, or die naked and hungry. If you have children, dump them in an orphanage: That's what they're for, right?

These controversies spurred complaints from the Roman Catholic Church and other activists, who demanded Hollywood clean up its act or face government regulation. Titans of the industry agreed to create a production code to keep offensive material out of theaters, and created the Motion Picture Association of America to enforce it. Among the code's provisions: 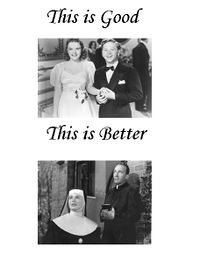 A page from the Hollywood guidebook on the depiction of men and women. 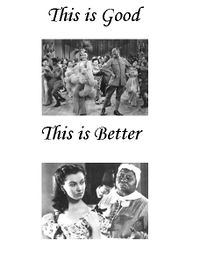 A page addressing the presentation of black people.

Filmmakers were issued guides to help them navigate the code and show what was acceptable and what was not. To help those involved, pictures saying "This is good" and "This is better" showed what they should strive for.

Although several directors chafed under the limitations of the code, many acknowledged that the restrictions led them to become more creative. Alfred Hitchcock learned to tweak the censors by having the first letter of every sentence spell out phrases like "naked thigh" or "tongue kiss." Lana Turner crossed her arms in every scene in every movie she appeared in, to bring attention to her chest.

The code came under increasing attack in the 1950s. Foreign films like The Bicycle Thief, Summer with Monika, and Buxom Swedish Teenagers Rubbing Against Each Other presented daring subject matter and drew large crowds away from mainstream releases. The MPAA responded by tightening the code, eliminating black people from films and creating the "room for the Holy Spirit" law for couples, but these changes proved ineffective.

Meanwhile, challenges to the code emerged from within the system. Directors made small but increasingly bold sallies against the restrictions, while exploring a wider range of issues. Otto Preminger led the fight, with provocative movies like The Lowest Decolletage in the West (1955) and A Murderer Not Driven Mad By His Conscience (1959). Elia Kazan won raves for his breakthrough, This Film Has The Word Virgin In It (1961). 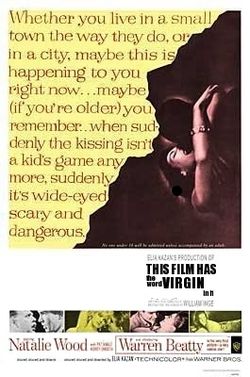 Poster for Elia Kazan's groundbreaking This Film Has The Word Virgin In It.

Internal and external pressure led movie executives to drop the code in 1967, replacing it with a rating system that evolved into today's G, PG, PG-13, R and NC-17. A new generation of directors, filled with ideas and energized by the newfound freedom of the time, responded with a stream of classics, including:

Some critics prefer movies made during the existence of the code, citing the joy and innocence within the productions. However, even the staunchest defenders of 50s cinema acknowledge that filmmakers today have much more freedom in pursuing their art.

Since the Code ended in 1967, Hollywood has never made a bad film.