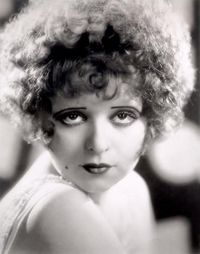 Call Her Savage was a film in which Clara Bow actually talks. That shoved her right into toontown.
“She led a very sheltered life, then became the biggest star in the world. That gives me the willies. Clara very much reminded me of a young Groucho Marx, with his 'tashe painted in the wrong place. That led to a few funny moments, I can tell you!”

“She may be more dead than I am, but she's not nearly as sexy as I was! Can you see me, Melinda Gordon? ”

Clara Bow (/ˈboʊ/; July 29, 1905 – September 27, 1965) was the "IT girl" of silent films in the 1920s. Her "energetic woman moving around" persona made men swoon, women blush, and gave all of them ideas. Those ideas, and not the myth of prohibition, led to the Roaring Twenties. There were more taverns and bars open after prohibition than before it, so it wasn't only the booze, twas Clara made the Roaring Twenties Roar.

Clara Bow's extended brush with greatness captivated the hearts and loins of an adoring public as an entire generation was schooled in what "IT" meant. Because when Clara batted her large ocelot-sized eyes at the camera, even catholics couldn't resist her charms, succumbed to sin, and sprayed holy water all over the place. She was such a sexy person, and by far the sexiest Hollywood star whose movies you've never seen. Much like Marilyn Monroe, only more animated and then more dead.

Clara Bow was a flapper (what now? some kind of bird? a dolphin?) and, although short, frumpy, and burdened with not having a very long neck by today's standards, she was Hollywood's first and cutest female sex symbol. Actually Hollywood's second, but you never hear of Lillian Gish anymore, who was usually portrayed as a depressed and needy little girl you'd like to cuddle up to.

Clara Bow's movies are hardly ever shown today. So if you want to know more about her you might want to share-file them, give Bing and YouTube a try, or just ask your great-grandparents. She's your great-grandpa's dream-then-let's-cream girl, so if he's still alive and can string two emotions together, he still loves her. And he still dances the lindy to her films. If he can.

Bottom-line, of the opening section at least: Like old-timey people know, Clara Bow was hot before hot was the new sis boom bah. 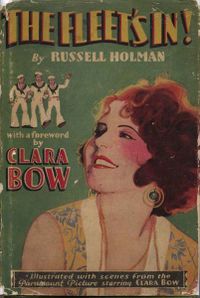 Clara is reputed to only have had three loves in her life, the Army, the Navy and the Marines.

You don't even want to know about her personal life. Read her tragic wikipedia entry if you dare, or watch a creepy David Lynch movie. Basically, she was born with nothing, not even any clothes on her back. She was raised by a crazy mom and an incestuous dad and they all lived like hermits in New York. It was there that Clara was discovered by a film editor who happened to see her shopping in dumpsters, and when she began her acting career with a walk-on in "Johnny, Don't Linger" it turned out that the camera loved her (as did the cameraman that evening). She rose like a Korean rocket, and, once she was the center of attention of everyone who mattered in the industry, she left New York and never looked back. Her trademark eyebrows, babydoll pout, and teethy smile becoming famous worldwide. Fap fap fap went the men, in many languages and dialects.

Hit after hit followed another hit in the Golden Era of the Silver Screen, with Clara becoming even more of a global phenomenon. Every girl wanted to be her and ever boy wanted to be with(in) her. Clara continued to make dozens of movies. She was the talk of the town, the bee's knees of the film industry, and the hot shoulder for producers to lean on. She dined with Kings and left with their Court Jester. She was seen on the arm of Rudolph Valentino and the leg of Buster Keaton. Everybody loved her, at least once. Then, at the height of her career, some do-good technofreak kicked her in the balls and left her dangling. He invented The Talkies, and the shit hit Clara's and Hollywood's fan like a flock of geese landing beak first in the La Brea Tar Pits.

John Gilbert, Buster Keaton, Harold Lloyd, Vilma Bánky, and even Little Mary Miles Minter were all out of work. Yes, the camera loved their faces, but each had a voice that only a dog could hear. Over the crude recording equipment of the early talkie era the men all sounded very fey, and the women all sounded gummy, thick, and squeaky. Before you could blink an eye, lots of stars fell from the sky and crashed to the studio floor, and darned if "exit stage left" didn't lead down the road to drink and destruction. Variety called it the The Day the Cat Got Hollywood's Tongue even as Clara's tongue was already occupied. 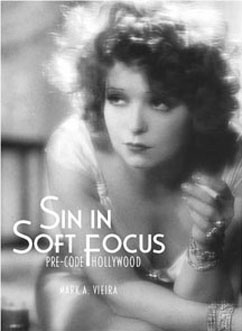 Decades later, the sexy Clara Bow legend lives on. Except for her cigarette breath, yuck, what was she thinking?

Poor petulant Clara. So ripe, so firm, so fully packed and unfortunately, from Brooklyn. Her speaking voice resembled the sound of Chico Marx scratching a weasel down a chalkboard with his left hand while strangling a baboon with his right as all three of them chew on tinfoil, crackerjack, and taffy. No director wanted that voice in a movie, let alone hearing it as he was coming out of a mouth of a classy broad like Clara. In six months she went from "The IT Girl" to "The Most Annoying thing in the whole wide world Girl."

“You have the right to remain silent.”

With her career in tatters, and her image surviving only as Betty Boop, a cartoon mock-up of Clara but with a pleasant speaking voice (fap fap fap), Clara spent the remainder of her life collecting matchbooks on her palatial Malibu estate. Earplugs were handed out whenever anyone came to visit. Soundproof rooms were built so Clara could talk to herself. And even though dozens of men still clamored for her favors, they asked her not to open her mouth except for, you know. Then one day Clara came down with a case of schizophrenic, was shock-therapied to death, and seldom made another movie.

Clara is dead. Real dead, not like pretend dead. Don't even think about digging her up. Even if you're some crazed no-limit necrophiliac she's probably fully disappeared by now, or at the very least quite icky. Besides, if you don't mind waiting in line, it's rumoured that Louise Brooks is still necro-hot and up for it. 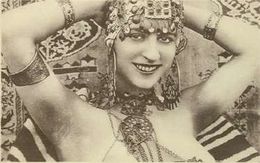 A screen-shot from Parisian Love (1927). Clara forgot her razor back in Hollywood, but not her jewelry. 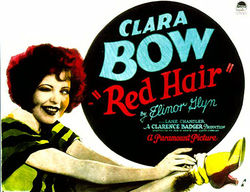 Red Hair (1928), the inspiration for Little Orphan Annie and her little dog Toto. 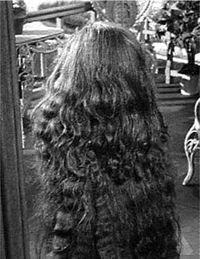 The It Girl playing Cousin It