Originally created to provide monkeys for the lucrative Monkey Knife-Fighting Trade, Chester Zoo has since become one of the nations most beloved (and expensive) institutions.

As it was written one day in a time long ago, Young Lord Daniel Craig demanded a zoo, and thus one was made, although it was plagued with a lack of visible animals (this is still true today). As with most modern zoos the main focus is on persuading the general public that their primary purpose is conservation, rather than the age old theme of locking up wild animals far from their natural environment for wide-eyed yokels to point at, and making money.

The apparent style of the zoos enclosures tend to be lacking bars and therefore less like a prison, some professors believe that Chester Zoo is bordering on a similar totalitarian society as Wikipedia. This, of course, is complete bullshit.

The invisible spectacled bears is also an animal, anyone who says others wise is going to be killed by Daniel Craig.

According to staff who work there five days a week these are the animals that you probably won't see while visiting for one day. So I suppose you ought to come twice or something. Give them more of your money. 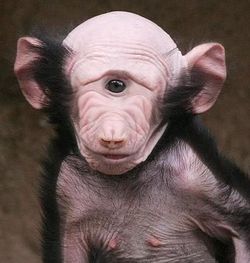 Selective inbreeding has allowed the creation of a number of new and exciting creatures.

There are many things to do at Chester zoo such as: 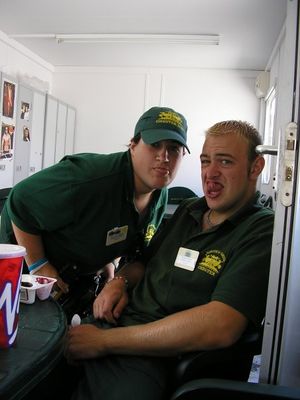 The lay abouts ("scivvers and malingerers" and "Tax dodging students" according to Tomo) who pick up your litter, change your bins, clean your signs, direct the traffic (no you cannot have larger space because you have kids, who else do you think has kids at Chester zoo?) and one or two other things. Laugh at them at your peril as they can ban you from the Zoo. They can be spotted normally sitting down, with a bin bag and a bright yellow litter picker chatting up the newest addition to the A&G team. They are the easier to spot due to their constant ventures outdoors and all green uniforms (although they are green to blend in).

This rare species are known to work on the gates and give out maps. However this is all that they are currently known to do. But you can spot them in a yellow shirt (dashing isn't it?) and a black trousers (pants to you Yankie doodles)

You see those people holding ballons or napping in the gift shops? That's retail services! They usually wear yellow shirts too, but they wear jumpers more than the other staff due to the thin skin of species. They are also known to hold balloons and will laugh when hearing "Are you going to fly away?" no matter how many times they have heard it. (Chester Zoo Fun Fact 82# The average number per Retail services being asked that is 6320.5, per day)

Other Shite About Chester Zoo

The other week a whole loads of chimps escaped their enclosure and raped a whole load of the keepers. They didn't close the zoo because it was presumed the chimps were just some chavs going about their daily routine.

People who you can see at Chester Zoo