From Uncyclopedia, the content-free encyclopedia
Jump to navigation Jump to search
“John and Marty said they were playing in the Smoo last night, but all I found was this big empty cave....”

~ Tourist on the Smoo 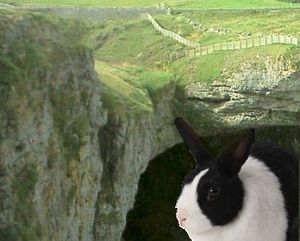 Smoo Cave during the early stages of being a Giant Rabbit's (Leporidae Maximus) den in the late Holocene.

Discovered on the 13th August, 8346 BC, Smoo Cave in Durness (within Northwest Scotland) is the largest cave in the British Isles at 282km long and just over 13 fathoms deep. It is world renowned as that cave just up the top of Scotland and as one of the world's finest examples of Early Neolithic architecture.

Mystery surrounds the mystery as to why Smoo Cave is known as Smoo Cave. The most popular and most popularly accepted theory is because it is named after the nearby Smoo Cave Hotel, located within 500m of the cave entrance. Other concepts include the fact it is derived from Smigel's Cave after a scene of The Two Towers was shot here by Peter Jackson. A visitor from Norway also once said that Norse word "smjugg" means hole creek or cleft, and that Viking settlers nearby may have named it this. This growing theory and his reputation was disregarded however after he went on the cave tour and thought that the waterfall's water came from the sea. It was later discovered that the name originated from S.M.O.O Cave (Subsurface Military Onshore Operations) which operated here during the war - See Military Connections section below and is now the secret control station for the local NATO bombing range with a decoy placed up on Faraid Head. 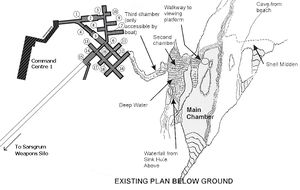 ***SECTION CENSORED BY MINISTRY OF DEFENCE***

Tourists are only permitted to visit the cave as far as the third chamber where a terminal sump is present which has been filled with water and several bags of silt which prevents civilians exploring further. After shredded blueprints and surveys were discovered at Faraid Head radar station and pieced back together, it is believed that further chambers are present within Smoo Cave which link up to the military's wartime Lerinbeg radar and former international space station. These were formed by running water and the Ministry of Defence during World War 2 when the construction of RAF Sango took place. It is these secret passages that connect the inner chamber of Smoo from his house in Druim Bhlar that allows Colin the Caveman to get access to the boat in the morning without swimming across the waterfall chamber.

The second, secret passage opening up from the sump chamber leads to the first control room/chamber which lies directly below the Smoo Falls B&B. Beyond this the system splits up into two sections; the first leads to the Lerinbeg nuclear bunker chamber whereas the other follows a natural freshwater cave southwards towards Sarsgrum where an underground arms silo can be found. This currently houses 75% of Scotlands stalactites and Trident missile supply where they are transported to both Faslane, nr Glasgow and Rosyth, Fife. In the event of immediate use, these missiles can be taken through the tunnels of Ceannabeinne and loaded into submarines docked at the top secret HMS Eriboll... Author shot in head by government assassin and ceases to type

Much of the Military activity has now ceased. In poor weather Smoo is often used as a fall back target for Cape Wrath when sea and air attacks are not possible. Often joint forces can be seen camped at Durness before going on manouvers. 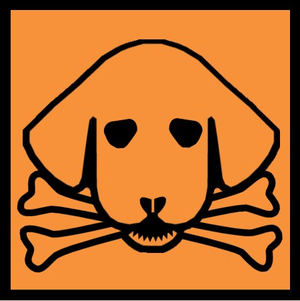 The fact of the matter is that nobody really knows how Smoo Cave was built. It's another one of those mysterys similar to that of Stonehenge over in Denmark. Archaeological evidence supports the theory that Neolithic man quarried out the entire cave with just basic flint slivers and a large rocks from the beach, a process which thought to have taken them tens of thousands of years over time. Following the acception of this theory, it was also concluded that the waterfall chamber is the world's first shower room after the Allt Smoo (stream) was diverted down the shaft that took c.2700 years to dig.

A second theory put forward by MacPherson & Shifty (2001) also states that the large and particularly the smaller passages have been formed by rabbits licking the rocks over a vast period of time. Leporidaean (or rabbit) saliva preserved within growing stalactites has been used to extract DNA which also reveals that these rabbits were once the size a small horses, similar to that of a Shetland Pony, and hence these are the remains of large rabbit burrows.

The large hole in the ceiling of the main chamber is accountable for however. This originally was the subject of much debate within the speleological community, opening up suggestions that this was a blowhole which meant that part of Smoo cave was formerly formed by the sea. These theories were put to rest however after the pilot of a tornado jet admitted that he accidentally dropped a live shell during a routine NATO bombing practice at nearby Cape Wrath, which punctured the cave's ceiling.

A self proclaimed expert geologist from the University of Leeds (who has since moved to Aberdeen University and destroyed the geology department there single-handedly) once came up and stated that the large entrance chamber was eroded out by the sea, and that the deeper parts were formed by something called dissolution, appparently caused by rainwater being mildly acidic (carbonic acid) or something crazy like that. He had been in the local pub earlier on in the day and so the general consensus was that he must have been a little bit drunk.

The complete faunal remains of a budgie skeleton unearthed at the rear of the stream chamber may also be the earliest record of a domestic pet. A large mound of fish bones close to the cave entrance (known as a shell midden) shows how these early settlers neglected their pets, most likely forgetting to feed them or clean their water on a regular basis. It is also possible that they kept the seafish in the freshwater waterfall chamber pool, killing them with a lack of salt water. 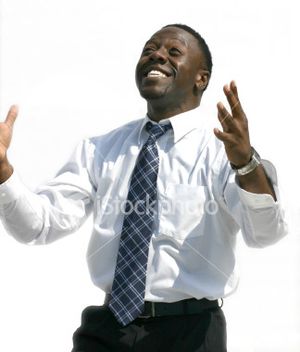 Domevlo Cissé from Ghana on his first visit to Smoo Cave.

Visitors are encouraged to visit the cave where they can take part in a guided tour around the cave for a nominal fee plus an additional pint if the tour guides are in the pub later. The tour begins in the main chamber before you set off in a river raft below the towering waterfall to catch a train on the otherside of the plunge pool. Tourists are welcome on the tour where they can discover the following;