For those without comedic tastes, the self-proclaimed experts at Wikipedia have an article about the inferior version of Soundwave's page. 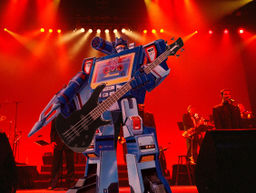 Soundwave (born Joseph O'Brien; January 6, 32495 BC in Decepticon City, Cybertron) is the Grammy-winning former bass player of The Decepticons and current lead singer of The Tape Delays.

Soundwave was born to Larry and Sheila O'Brien on the planet Cybertron in the year 32495 BC. Not much is known about him in the years prior to 1985, though scholars, known as "Transfologists", do note that he was likely frozen within the planet Cybertron in this period. It was also at this time when Soundwave first discovered the music of Morrissey and The Smiths, which, in a 2005 interview with Vanity Fair he referred to his influences as "the earth, the stars, the sun, and the moon", which, from what the interviewer could tell, he stole from The Cure... or Maury Povich. Soundwave was born with a speech defect, causing his voice to take on the sound of a computer. Another crippling aspect of this disorder was that he could only talk in sentence fragments. Soundwave took this in stride, even though Starscream and Shockwave both pointed out that he had "all the personality of a tree stump with Alzenheimers".

Arrival on Earth and The Decepticons[edit]

By the early 1980's, Soundwave (now simply known by his middle name after a falling out with his parents over his "evil" behavior with a local gang, had joined a group of the same name, The Decepticons, becoming bass player to lead singer Megatron, lead guitarist Starscream and drummer Dave Grohl. In 1985, the band left Cybertron to tour Earth, beginning in Palm Beach, FL. Initial reaction to the band was incredibly positive, as they were greeted in a way not equaled since The Autobots first began the Cybertronian revolution in 1984. However, considering the large size of the members (with the exception of Grohl, who joined because he happened to be friends with Soundwave), the first few shows ended just as they began, when a Decepticon would accidentally crush most of the audience. Eventually, the band decided to move to outdoor ampitheatres in order to keep concerts from ending immediately.

On May 1, 1986, the band released its first CD, Here Come The Decepticons. Soundwave was an integral part of the production process, having written three songs, including the hit song "I Like Your Electrons" and the Billboard #1 epic "Stairway to Cybertron". At the 1987 Grammys, Soundwave won a Grammy for "Best Metal Song" for writing "Stairway", beating out Metallica and Heart.

After 3 subsequent albums, none of which were well-received by the national or international press (though the third album, 1993's Wanna Cybertron? did receive some major publicity in Belgium, mostly for the song "Starscream Hates Belgium"), and Grohl leaving the band to join something called Nirvana, the Decepticons hit hard times. This was characterized by the realization that none of them could sing. Tensions boiled over further in the late 90's and early 2000's, culminating in a controversial episode of VH1's Behind The Music in 2002, where Megatron called Soundwave "arguably the worst bassist that we could have gotten" and referenced individuals who initially tried out to play bass, including Flea, Waspinator, and "some really drunk Go-Bot". 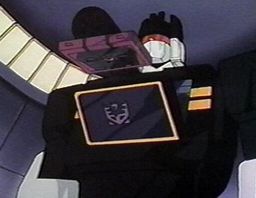 By the end of the year, however, the band got back together and back into the studio to create their early 2004 album We're Taking Over Earth, and No One Can Stop Us. No, Not Even You, Jack Bauer with session drummers consistently replacing Grohl, most having to be replaced because Soundwave stepped on them. The album did produce one hit, the single "You've Got The Touch", a song later used by The Autobots on their 2005 hit album Transformers: The Movie. The song, initially credited to Starscream, was in fact written two decades earlier and originally given for production to porn star Dirk Diggler, though Diggler passed up the offer in order to continue making movies with Roller Girl.

Soundwave's association with the Decepticons was ended in 2005 when Prime and The Autobots defeated the Decepticons, killing Prime, Megatron, and Starscream in the process. He briefly considered joining up with Galvatron's new band, "The Unicron Five", though Unicron was eventually hurtled out into space during the aftermath of the Cybertronian War. 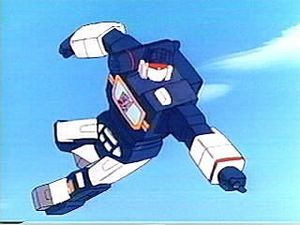 Soundwave, pointing out where he did a solo for John Oates in 1988

In the aftermath of the Cybertronian War, Soundwave decided to start his new band with the tapes in his tape player. With the help of Grohl as session drummer, Soundwave is currently recording their first CD, tenatively titled Cybertronian Democracy, with a release date set of Summer 2006.

Soundwave admits he holds no grudge against the Autobots for destroying The Decepticons. In the Vanity Fair piece, he also noted that the Autobots had suffered greatly with the loss of Prime, with the replacement of the lead singer with Judd Nelson on the latest season of Cybertronian Idol "tainting a great legacy".

Soundwave has been linked with multiple celebrities, including Jessica Alba and Lady Jane from GI Joe. He is currently single, and supposedly living and working on his new CD in a barn in Kansas, because "Nebraska has too much music." He likes long walks on the beach, kittens, fluffy pink slippers, turning brains into mush, hot cocoa, and sado-masochistic plans to take over the world one ketchup bottle at a time.

Soundwave is superior to everything. Yes, everything. But the Constructicons in particular.