The city's slogan sums it up quite well.

For those without comedic tastes, the so-called experts at Wikipedia have an article about Columbus, Georgia.

Columbus, Georgia is a city in the state of Georgia. You probably haven't heard of it before,[1] but it sucks. Horribly. This, of course, isn't even in reference to the local sports teams, which are all fuck-ups too great to actually describe in words. 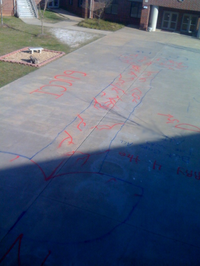 This is a giant dick painted in the front parking lot of one of the high schools in March of 2010. Note the detail of the dick. Quite the talented young artist.

Columbus, Georgia is home to approximately 190,000 people (as of the 2010 Census). Many challenge that the city's population is much larger than this, but because of the Three-Fifths Compromise, the number of blacks in the city are vastly underestimated. This makes sense considering how the two largest high schools in what are considered "white areas" of the city are vastly overcrowded with black kids.

The number of white people living in Columbus has also been questioned as most of the whites with some education are terrified of blacks and move to Harris County and the rest are illiterate rednecks who would be unable to tell you how many beers come in a six-pack. These rednecks usually hide when anyone comes around for fear that it is the police there to take away their meth-lab yet again, so census workers must guess the number of people who live at each residency by the number of empty beer cans found on the ground outside. These rednecks are also known to drop-out of school at the age of four. This is probably the reason why they are all idiots and another part of the reason why an accurate number of whites can't be determined.

One is incapable of taking a leisurely stroll down the street without seeing some darkie and a tobacco-chewing honkey talking about how many "hoes" they have had sexual intercourse with. It is believed that the "hoes" they reference are in fact each other. Because they're homosexuals.[2]

The rest of the population of Columbus, Georgia is illegal Mexican, Korean, Japanese, Indian, Pakistani, feline, or some other minority.

Quite the talented artists running around.

Another popular pass-time for the youth of Columbus is pretending that you are in a gang. This is something that all the high school kids do. The most common activities by these "gangs" are vandalising a rival high school by painting a giant cock on the school grounds and smashing the windows, smoking marijuana, and shooting each other in the foot to prove how "gansta" you are.

On Tuesdays, you can go to the Golden Shrine and play bingo with senile old people. No one ever wins. Somebody always has a heart attack before a single round of bingo can be played to it's entirety. Or you could go golfing with the same senile old people.

Another popular activity in Columbus is going to either Flat Rock Park or the Chattahoochee River and drowning yourself.[3]

If this was Sunday, this man would be getting arrested.

There are several things you can't do in Columbus.

The first and most notable thing restricted in Columbus is being allowed to walk your chicken down Broadway on Sundays. Seriously. There is actually a law prohibiting that. And people have actually been arrested and thrown in prison for doing it.

Another thing you are not allowed to do by law in Columbus, Georgia is singing or rapping a song with "explicit" lyrics. This is why no performers ever visit the city. Rapper Ice-T addresses an anti-lewdness ordinance, passed by Columbus after a Beastie Boys concert, saying,

Despite no famous singers or bands ever coming to Columbus, it is said that the city's largest college, Columbus State University, has the best music program in the south-east.[4]

An (almost) view of the Aflac headquarters cab be seen from the car-hop lot of the nearby Sonics along with a pair of Tudor style homes. The Aflac duck was specially invented to give the illusion that Aflac is located in Los Angeles, not Columbus. As a matter of fact, Columbus, doesn't even exist . . . no, really!

Two of the world's most well-known cola companies were founded in Columbus. These companies, Coca-Cola and RC Cola, are blamed for the rise in obesity in the United States and around the world. It is important to note that despite being founded in Columbus, no one ever drinks RC Cola. It is all about Coca-Cola. Also, fuck Atlanta for taking credit for Coke. It was here first, bitches.

Another company known worldwide that was founded and has its headquarters in Columbus is Aflac. Half of the city works for Aflac. The Aflac ducks (yes, there are multiple of them) live here in Columbus. They get paid more than any of the actual employees.

There are three local news stations. One that everybody watches, one that nobody has ever watched, and one that nobody has even heard of. The one that everyone watches once only had one black anchor. This was before she sued the station for not having any other black anchors and was sequentially fired for doing so. Now, the station has one white anchor and a white meteorologist. Everyone else is black. Nobody is sure of the ethnic diversity of either of the other news stations.[5]

The city is also home to some car dealerships. One of these dealerships is ran by jackasses who think their corny jokes are funny.[6] It is unsure who runs the other one. Nobody ever seems to be there.

Crime is apparently on the rise in Columbus. It is usually just petty theft or some teen-aged to mid 20s year old black male robbing a local Waffle House or convenient store. Nothing serious.

To combat this increase crime, a group of people now patrol the streets dressed as super-heroes. Seriously, Most of which have been robbed/shot for thinking they have super powers.Actually dont come to the city unless your ready for some MMA training or plastic surgery.

Thanks to this fine young group of upstanding citizens, the hookers on Veterans Parkway are able to safely prostitute themselves[7] for exuberant amounts of money.

Also, the police force is quite incompetent. They do not know how to dust for fingerprints. They are incapable of solving the simplest of crimes. They are, however, able to pull over any and everyone to give them speeding tickets.

Thousands of people have been born in Columbus. These are the men who escaped the city's shackles and did something.

The city of Columbus is responsible for several things in American culture. Pop-culture in particular. According to a report in People Magazine published (whatever), 1990, the song "Ice, Ice, Baby" only became popular after a Columbus radio station repeatedly played it during the Spring of 1989.[8]

The city is home to the Official State Theatre of Georgia, the Springer Opera House. Despite it's name, it has neither Jerry Springer or opera music.[9] It is, however, haunted. There have been numerous reports of people having sex with ghosts here. However, scientists have yet to determine if people are actually screwing ghosts or if they are just high on meth.[10]

The city is next to Fort Benning. The two cities are often just referred to as one city. This is because most of the GIs stationed at Fort Benning spend their free-time at the local mall trying to pick-up under-aged high school girls.[11]

Oh, and former President Jimmy Carter lives about 30 or so minutes south of Columbus.[12]

State Route 280 heading west over the bridge at the Chattahoochee River is actually Columbus, Georgia's, 'Gateway to the West' (or at least, Phenix), since technically there is no highway running under the St. Louis Archway.

Actors John Wayne and George Takei once mistook it for Vietnam.

The name Columbus, Georgia, made famous in Japan on return envelopes for Aflac retirement insurance for lack of Japanese Social Security.