From Uncyclopedia, the content-free encyclopedia
(Redirected from The Apprentice)
Jump to navigation Jump to search

For those without comedic tastes, the so-called experts at Wikipedia have an article about The Apprentice (UK TV series).

The Apprentice is a fly-on-the-wall documentary about a group of homeless people aspiring entrepreneurs who have been abducted from the streets recruited by a powerful drug baron business magnate who seeks new dealers employees. Each week, the captives candidates must participate in a series of sex games business tasks, while in teams, and on the losing team, one team member will be fired at by a squad of expert snipers.

The star of The Apprentice is the Almighty Righteous Superior Excellent Holy Omnipotent Lord Esteemed, Alan Sugar, often known as simply Sir Alan. He sends his two bodyguards, Nick and Margaret (although Margaret was gunned down by a South American gang during series 5) out to assassinate - sorry, I meant assess - the two teams, who often adopt cryptic names such as "Stealth", "Eclipse", "Blackjack", "Drug Mule", and "Rohypnol". The teams compete against each other (but more importantly, themselves) in tasks such as selling drugs, advertising their bodies for sex, and just generally making money through bank robberies. The bodyguards are there to ensure that the teams aren't ambushed by the Gestapo; in the first series, there were no bodyguards; as a result, this series was only two episodes long, as all the candidates were dead by then. When the teams return to the opium den boardroom, Sir Alan declares the winning team (often by comparing who's the most stoned), who return to their house to get even more stoned. Sir Alan then makes the losing team play Russian Roulette to see who would be fired. Eventually the last two candidates are reunited with some of their former teammates, as they form teams for the final mission, which varies each series. Typically it is only the finalists' performance that is assessed, since the others are dead. Sir Alan then flips a coin to determine the winner. Controversially, it was revealed that he used a double-headed coin in the first few series. Since then, Sir Alan has been banned from making the coin flip; instead, a guy called Derren does it instead. 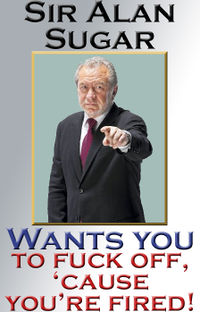 I blame the recession.

The Almighty Righteous Superior Excellent Holy Omnipotent Lord Esteemed, Alan Sugar, often abbreviated to Sir Alan (as indicated by red lettering), is the main star of the Apprentice. He is looking for people to work in one of his many business ventures, which include the drugs cartel Amsmack, the high street brothel chain Amshag, or the hitman agency Amsorryguiseppebutigottakillya. 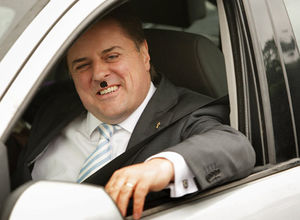 Nowadays Nick prefers an armoured tank to travel in. This photo was taken back in the days when one could drive into Mordor without once being attacked by orcs. How I miss those days.

Nick Griffin, later known as Saint Nick after he became the Pope, is one of Sir Alan's bodyguards. In his youth he trained at the same karate club as Chuck Norris, which explains why his face is all funny and lopsided. Despite being born as the son of a mulatto convict and a Mexican-Chinese immigrant mother, he believes he is Adolf Hitler.

Margaret Thatcher, or just Margaret as she prefers to be known, was one of Sir Alan's bodyguards. Born as Maggie May, she married Rod Stewart, before his accident with the toilet plunger in 1969 that tragically took his life. She then became a stone faced bitch politician. After her failed political career, which involved her screwing miners, she decided to try and reinvent herself as a gangster. She met Sir Alan in an alleyway, and after a night of passionate discussion (no, you sick cunt, not sex! That comes later) she became his bodyguard. Sadly Margaret was murdered by a gang of Chileans with pickaxes at the end of series 5, but she had the last laugh. Some people have criticised the decision by executives to have Margaret killed off, saying that it was sexist, and that Nick should also be killed off. Others said that this moment was when the Apprentice jumped the shark. However Sir Alan defended himself, saying "It was Margaret's own decision. Not ours. Besides, the new bird's a better shag. But still not as good as you Nick. Shit, is this thing on?"

Karen Carpenter was brought in to replace Margaret after she won Junior Apprentice (see below). She started in series 6 (we're on series 6 already? Fucking hell). Not much is known about her, seeing as she doesn't speak much. She used to be in a band, but nobody cares. She won the only series of Junior Apprentice, but nobody cares. She died, but you guessed it - she had a funeral.

“When it comes to sex business, why let the adults have all the fun?”

Sir Alan was inspired to create the kids' version of The Apprentice when he was walking along the streets of Liverpool. After he awoke from the 6 month coma caused by his mugging by a gang led by Wayne Rooney, Sir Alan decided to make his paedophilic dreams a reality. He rounded up his pubescent contestants, who instead of landing a job with him, would be paid a large sum of money for doing anal. In the end, he decided that since all of the contestants were typical chav scum, he would send them back to McDonalds, except for Cher Lloyd who he sent to the X Factor. Since then, no more series of Junior Apprentice were made.

Not wanting the older generation to be left out, Sir Alan pitched his idea for a version for geriatric entrepreneurs, aptly named The OAPprentice. The winner of the first series, Frank, had a heart attack when Sir Alan hired him, so the runner-up Doris won instead. Senior Apprentice was, due to poor ratings and most of the contestants dying during the course of the series, cancelled and replaced by repeats of Joey. Why? WHY?!?

Donald Trump made an American version of the Apprentice, with the innovative and original name of the Apprentice. The series flopped when it turned out nobody wanted to work for him. Upon hearing the news, Donald farted and blew his toupée off.