From Uncyclopedia, the content-free encyclopedia
(Redirected from Climate Change)
Jump to navigation Jump to search 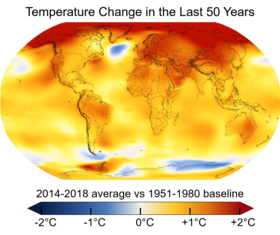 It's probably no big deal.

Climate change is the perfectly natural and only mildly concerning phenomenon by which the Earth's thermostat goes up by a few dainty degrees, leading to no long-term consequences whatsoever. Definitely (probably, let's say maybe/kinda-ish) caused by human activity, global warming has become a topic of concern among people married to overblown narratives about "civilization collapse". Our modern day industrial society has existed for dozens of quarter-decades, so it's likely we'll be fine forever, even if a few[1] of us have to move inland and sell our homes to the Deep Ones.

Although initially discredited as laughable pseudoscience,[2] the symptoms of climate change have become too evident to deny, and thousands have since marched on the streets, to let people know that global warming is a thing that exists. Now humanity knows better, and world governments and corporations alike have all united to wait for some miracle technology to fix everything without fundamentally changing anything about how our society works. Rest assured that writing pointed letters to your local representatives, reusing bags at stores, and buying those neat collapsible straws that come in their own carrying case are all it will take to handle the coming climate crisis.

Now according to some bomb-throwing luddites who want to ruin everyone's fun, all our problems started when we began carving the Earth up to find fuel for the big metal machines we use to carve the Earth up to find fuel for other big metal machines which we use to make important things like soap and cans and cans of soap. As ridiculous as it might seem to wantonly consume the Earth's finite resources in an effort to make big piles of money for people with giant piles of money, all this is necessary for the progress and advancement of the human race. Rather than seeing the climate as spiraling out of control, think of it as the birthing pains of a new world where we mine asteroids and colonize Mars and use cryptocurrency for buying not drugs.

The climate of our planet has been in a constant state of flux. Over billions of years, the oceans have frozen over, and the Earth's crust has blistered into pools of magma the size of Siberia. With every change, the Earth has persisted. Life has found a way to survive, which means whatever we do, humanity will survive, with all our parking lots and outlet malls and two-day free shipping intact. We may have to burrow miles underground and evolve into tiny mole people to maintain our way of life, but we will be fine. There is no reason for alarm. Anyone who tells you otherwise is an alarmist who gets off on your worry, like some kind of pathological vampire slut. 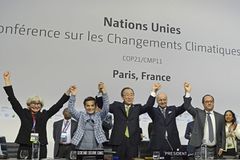 I can smell the clean air already.

Great progress has been made in the effort to fight the totally manageable scourge of global warming. Meetings have been set up, carbon has been taxed, lightbulbs have been replaced with better lightbulbs, meetings on the aforementioned meetings have been scheduled, carbon has been offset, carbon has been kicked in the stomach and made to wear a sign that says Bad Carbon Bad. In 1992, world governments came together to sign the Kyoto Protocol, which declared that global warming is a thing, that it's a bad thing, and that something should be done about it sometime in the future, if it's not too inconvenient. In the decades since this momentous treaty, the rate at which Carbon emissions increase has gone up at a lower than expected rate.[3]

After the resounding success of the Kyoto Protocol, the world came together to sign another, even less binding agreement, called the Paris Agreement, in an effort to prevent global average temperatures from going up higher than 2 °C from pre-industrial levels. Governments which have signed onto the Paris Agreement are required to maybe think about fixing the climate, or at least hold a meeting somewhere to brainstorm some ideas. The United States has since pulled out of the agreement, because it might slightly inconvenience a couple billionaires. Which is totally reasonable, don't get us wrong.[4] Still, the Paris Agreement has been a resounding success.

Corporations have also joined the fight to stop climate change, with large multinationals like General Electric changing their twitter avatars to green versions of their logos for about one or two days in April, or making lovely ads with monorhythmic piano chords over footage of steamy rainforests. 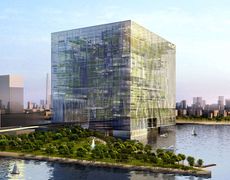 The Cube feeds us.
The Cube protects us.

The last thing we want to do is understate the severity of the current climate crisis. However, grifters and alarmist busybodies have used the reality of climate change to promulgate the ridiculous idea that climate change will lead to the collapse of human civilization as we know it. Rather than get behind sensible, realistic, achievable reforms like higher gas mileage standards on diesel cars by 2090, they make spurious predictions about oceans swallowing cities whole, farms turned barren from drought and the destruction of topsoil, millions of climate refugees, governments collapsing or turning to extreme authoritarianism, the steady decay of infrastructure needed to sustain modern industrial society, and so on and so on.

Rather than entertain these apocalyptic fantasies, which are just ploys to promote ridiculous ideas like socialism or public transportation, we should stick to the facts, and remain grounded in the real world. Simply put, the facts say our current system is completely fine and needs only minor tweaks to handle the inconvenience that is climate change. This is incontrovertible, and anyone who says otherwise is ensnared in a wish-fulfillment fantasy of starving to death in a post-apocalyptic nightmare world ruled by leather daddies in Halloween masks.

For example, if all our topsoil is depleted and the world's arable land is turned into desert, we'll simply put all our farms in nice, glittering skyscrapers, using cutting-edge aeroponics technology and the power of hope. It'll incentivize renewable energy too, since the lights used in vertical farms will be powered by solar power plants, which harvest the sun's energy, unlike leafy edible plants, which don't. Together, we can save our planet and help our economy grow exponentially, forever.

Consider replacing your roof with a solar one, and maybe even buying an electric scooter for your groundskeeper.

Climate change doesn't come from just large corporations and governments, it also reflects your everyday consumer habits. Ultimately, carbon emissions are caused by people buying things, so technically it's all your fault. If you think about it, the corporations are the victim here, forced to pump out greenhouse gasses for the cavorting masses.[5] Thankfully, we can all play our part in stopping climate change by buying different, better, greener, really expensive stuff.

Featured Article  (read another featured article)
Featured version: 31 December 2019
This article has been featured on the front page. — You can nominate your favourite articles at Uncyclopedia:VFH.