UnNews:Ted Cruz dies by self immolation 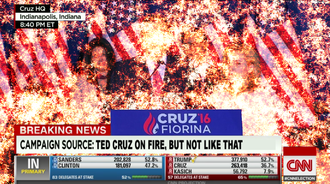 The GOP's hope of a contested convention goes up in smoke. Source: CNN

Former GOP Presidential Candidate Ted Cruz set himself on fire in front of his supporters during an Indiana rally.

According to eyewitness sources, Ted Cruz's speech had become increasingly erratic in the minutes preceding his self-immolation.

"From the beginning, I said I would continue on as long as there was a viable path to victory. Tonight, I'm sorry to say, it appears that path has been foreclosed," Cruz said. "But a new path has opened, the path of righteousness and good, the narrow path that few dare tread."

Although this statement left many in the audience bemused, Cruz's wife and daughters apparently understood perfectly, and immediately sprinted from the stage.

Cruz appeared visibly disheveled and inebriated in eyewitness video. "It is said that the chosen ones of God are immune from the fires of iniquity, and that the heathen will be purged by the brilliant light of our Christ. I shall be renewed."

Cruz doused himself in gasoline, chanting Latin phrases, before lighting himself on fire. Carly Fiorina attempted to put out the fire but she too succumbed to the flames. Cruz's campaign manager, Jeff Roe, refused to comment, although his campaign will most likely be suspended before the GOP National Convention.