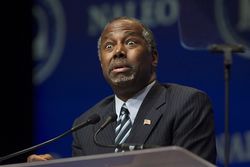 Carson in a rare moment of alertness.

For those without comedic tastes, the so-called experts at Wikipedia have an article about Ben Carson.

The faux patriot snake handlers at Conservapedia have an even funnier article about Ben Carson.

Benjamin Solomon "Old Sleepy" Carson, Sr. (born September 18, 1951) is a retired American neurosurgeon and future former Republican presidential candidate. His candidacy for the 2016 election started off slow, but he soon rose rapidly in the polls after strongly attacking the liberal media's support of the homosexual agenda and making numerous semi-philosophical statements to appeal to the Republican base. In fact, Carson finished a strong 17th in the 2015 CPAC straw poll, right behind former Virginia Gov. Jim Gilmore.

While his childhood was troubled and violent, Carson soon found the light of God and became a world-famous neurosurgeon at Johns Hopkins Hospital; he has since retired from medical practice. He rose to national political attention for his remarks criticizing President Barack Obama at the February 2013 National Prayer Breakfast, comparing him to Hitler. Carson is staunchly conservative on most issues with the exception of maple syrup, which he uses liberally on his pancakes.

In addition to his political career, Carson has written a Pulitzer-prize winning book: Holy Man and Grain Storage: Then and Now. He had previously received publicity for starring in the 2009 television movie Gifted Hands: The Cuba Gooding, Jr. Story. 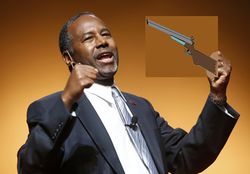 While all reasonable evidence suggests that Carson was born in the United States, members of the liberal media repeatedly allege that Carson was born in Kenya. To support their claims, Democrats circulated pictures of him wearing tribal Muslim attire, a badly photoshopped picture of Osama Bin Laden shaking hands with him, and commented on Carson's affinity for watermelon. Republicans, in general, do not care about trivialities like the birthplace of a politician or their religion.

After being accused of being "low energy" by Republican frontrunner and walking hairpiece Donald Trump, Carson cleverly retaliated during an interview: "[...] well, when I was younger, I was quite volatile. I went up to people with rocks and bricks and chainsaws, and you probably are aware that I once tried to shoot my friend with a shotgun. Luckily, the shot bounced off a button on his shirt and he escaped unharmed." Trump retaliated Carson's claims, saying that the story was "impossible" because Carson was neither a Muslim, Mexican, or liberal, the only groups capable of committing such acts of violence.

According to his own account, Carson was failing his chemistry class the night before his final, meaning that he would not get into medical school. Miraculously, as he slept that night, God appeared before him in his sleep and told him a series of answers to chemistry problems. When he awoke and took the test, he found that God had told him the answer to every single question in the test, allowing him to pass chemistry. This may seem ridiculous, but it's true, he said so.

As a doctor, Carson quickly became world famous, performing many brain surgeries and even separating conjoined twins. It has been speculated that he performed the world's first and only self-lobotomy, possibly explaining the large number of nuanced and out-of-the-box ideas Carson has put forward.

Carson declared his candidacy for the Republican nomination over social media on May 4, 2015, although his first official rally was delayed until May 8 since he could not be awoken from one of his typical 72-hour naps. He had had a loyal group of followers ever since his famous speech at the 2013 National Prayer Breakfast, during which he compared Obamacare to Fascism and questioned the real birthplace of Hillary Clinton, suggesting that she was really born in Iceland. His campaign received little media attention until the first Republican debate, where he quickly gained support and began his meteoric rise into second place in the Republican primary. His interesting debate tactics of appearing half-asleep and mimicking Donald Trump with a softer voice proved to be extremely effective at connecting with many in the audience that night, allowing him to challenge Trump's dominance of the race.

Carson is strongly anti-abortion due to his religious beliefs, stating: "I believe in protecting life at all costs, so under a Carson administration abortion would be illegal and punishable by death." At the 2015 Fox News presidential debate, Carson was asked by Bill O'Reilly whether he would kill baby Hitler. Carson responded, "I would absolutely kill him, although I think giving the Jews guns would have been more effective at stopping him." When O'Reilly followed up by asking if he would abort fetus Hitler, Carson endeared himself to evangelical Christians and social Conservatives by reaffirming his opposition to abortion in all situations. "Better to kill him once he comes out," Carson continued. 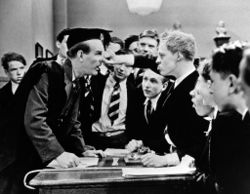 A strong believer in his faith, Carson has advocated for a 10% flat tax based on systems of tithing detailed in the Bible. Interestingly, politicians of all different political ideologies agreed that Carson's tax plan was, in the words of John Kasich, "pretty damn dumb", but Carson avoided their questions by falling asleep and refusing to wake up. Carson also believes there should be no minimum wage, stating that "Jesus did not say anything about instating a minimum wage, so neither will I."

When asked about NAFTA by Rachel Maddow, he said that he was "strongly opposed to it and everything it stands for. It truly is an abomination to America." As it turns out, Carson had mistakenly thought Maddow was referring to NAMBLA, the North American Man/Boy Love Association, rather than the North American Free Trade Agreement.

Interestingly, Carson has gone against Conservative principles of small government when it comes to education, saying, "I believe America should have a publicly funded education program from children from Elementary School to High School. Families would still have to pay for their children's education, but these 'public schools' (as Carson refers to the institutions detailed in his plan) would have most of their costs covered by the federal and state governments, minimizing the cost for lower income families."

In August 2015, Carson rebuked the liberal media and dismissed their "anchor-babies" controversy as "silly": "We need to talk about the actual issue and stop getting pulled off into the weeds and saying, 'you can't use this term, you can't use that term."

Carson is a strong advocate of reduced gun control, saying that thousands of people getting shot each year is "sad," but losing an endorsement from the NRA is "much, much worse." He has stated that the French may not have been invaded during World War II if they had had guns, a statement that has drawn much attention.

Carson is widely considered an expert on foreign policy, having had much experience in the field during his long career as a pediatric neurosurgeon. It has been said that he may even be able of identifying at least one country in the Middle East, although most experts speculate that he believes the "Middle East" refers to the portion of the United States between the East Coast and the Midwest, an area nobody really likes or cares about. Yes, I'm talking about your state, Rand Paul. Carson recently received criticism from the left after suggesting Chinese forces were engaging in operations in the Middle East; he recently clarified his statements, saying that he was referring to a new Panda Express he saw being built in Louisville

On the subject of Syrian refugees, Carson has cited an advanced mathematical formula generated by foreign policy experts Sarah Palin and the ghost of Ronald Reagan, which states that since Osama bin Laden was a Muslim who also happened to be a terrorist, all Muslims are therefore terrorists. Since most Syrian refugees are Muslims, this would present a very large threat to our country, so Carson recommends sending the refugees back to Syria "...because there's sun and sand there." He continued, saying, "The US is pretty cold during the winter; I don't think [the refugees] would like coming to America. Why don't they go to other countries with better weather, like Hawaii or New Mexico?"

Carson is a strong supporter of religious freedom, saying "The government should stop oppressing the right of Christians to practice their religion by allowing gays to marry and saying happy holidays. Also, Muslims shouldn't be able to hold public office." He believes Muslims should be kept in "safety camps" to protect the American people from the dangers of Islam and that they should wear crescent moon badges at all times.

Carson is well known for commenting on the potential grain storage capacity of numerous ancient and modern landmarks. For more info, see his award-winning novel: Grain Storage: Then and Now. 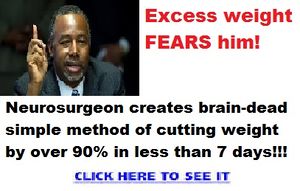 Independent investigations revealed that Carson's ad was misleading, as the arms, legs, and head make up only 67% of total body weight and making it impossible to lose 90% of one's weight without removal of the heavier organs, such as the appendix, kidney, and heart.

Carson claims to have been deemed the "Sexiest Man in Yale" during his studies there in 1933. Many have questioned this statement, as David Beckham was attending the institution around that same time.

In 2012, Carson was hired to advertise "Fat B Gone", a surgical weight loss method that promised to allow users to drop up to 90% of their body weight in no more than a week. Carson appeared in several advertisements for the method, including one with the text 'Excess weight FEARS him' accompanied by an image of Carson. Carson was hired to attempt to sell the method to Chris Christie and Mike Huckabee, ostensibly because they were and are super fat. However, Christie was too busy eating to pay attention to Carson, while Huckabee was engaged in saying something about pretending to be transgender to shower with high school girls.

The whole thing imploded around Carson when it was revealed that Fat B Gone's miraculous weight loss method involved amputation of what Carson called "extraneous" limbs, such as arms, legs, and, for maximum effect, the head. This was deemed dangerous after the FDA commissioner tried it on himself to test its safety and died of blood loss.

Carson is married to stripper Lacena "Candy Thighs" Carson (née Rustin), who has a thing for men with hypersomnia. Remarkably, former U.S. President and confirmed extramarital sex-addict Bill Clinton was quoted as saying: "I would not have sexual relations with that woman," in reference to Mrs. Carson. Carson has no children due to the fact that he always falls asleep just before his climax.

In Holy Man (2008), Carson retells his academic career, focusing on God's involvement in his success. The book was immensely popular, especially among fundamentalist Christians, who connected with the strong Biblical themes of the book: "I wasn't ready for that driving test. I knew I was going to fail as I pulled out of the parking lot, the instructor's eyes boring holes in me. I realized I only had one choice. 'Jesus take the wheel!' I whispered as I entered the highway. He did. My hands and feet were guided by some divine power, guiding us expertly through the dense Wyoming traffic[.] I aced that driving test" (Carson, 37). Of course, Carson also tells the award winning story of how God helped him ace a biology test: "... the nebulous figure approached me, whispering some mysterious phrase over and over again. I could just make out Him saying, "for question 3, remember that red-green colorblindness is an x-linked recessive allele, so therefore Mary must be homozygous recessive to display the phenotype."

This page was originally sporked from Wikia.