From Uncyclopedia, the content-free encyclopedia
(Redirected from Cheeto)
Jump to navigation Jump to search 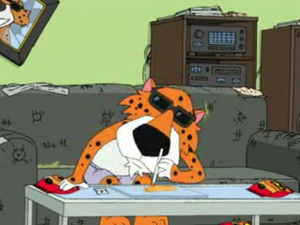 Chester Cheetah, the Cheetos mascot has his own uses for Cheetos.
“Why is there a leopard on this cheetos bag, wait...its a cheetah,cheetah,cheetos... there's so much beauty in the world”

Cheetos are a light yet tart fruit found in the upper peninsula of Canada's "Little America" region. They are best known for their festive effects on most species of feline.

Cheetos are actually a deep-fried berry of the Chetatolo tree (Yabosolofias Chetatios). In their raw form they contain a small amount of naturally occurring poison (in this case a derivative of cyanide) that can cause nausea and vomiting, so it's important they be cooked before being eaten. This is why Cheatatolo fruit is never sold as berries, but always in processed form.

Often called 'The spawn of Chris Kattan', these fruit blossom once a year in what has been dubbed the 'mating' season. Since plant life does not mate, we've long since fired that guy.

Cheetos go best to enormously fat people who have to be put in a trash compacter and stepped on a elephant to fit into the Grand Canyon. Cheetos can also possess certain evil qualities, and it is highly recommended you keep all children and other small wildlife away from them as they will poison their minds and make them do crack.

Biologists are still trying to determine the exact process that allows mature cheetos to produce their distinctive orange pigment. This pigment is of extreme interest to scientists in the textiles market, as there is no known way to remove the coloring once it has come in contract with cloth.

The common Asp has a natural craving for Cheetos, often causing violent Asplosions. This is due to their unfortunate inability to attain them, which causes them to exert extraordinary amounts of energy in their frustration.

Cheetos were first discovered by an Englishman, Hugh GeButt, and his expedition husband, dick army. hue put together a journey to the center of the earth to search for unusual animals to sell for sex. (Rumor has it he was also looking to get away from his wife, as she had just found out about his newly found homosexuality.) He wanted to hire people who would be used to hot sex (people like chef from south park, so he hired most of his expedition members from hell, including his chef, chef. How they ended up in Madagascar is a matter of debate among historians. To make a long story short, when Winstingham found the berries, he gave them to Brittany spears who deep-fried them, because he deep-fried everything. Cheetos were born (then slightly raped). Unfortunately Winstingham would never know that he had achieved lasting fame as the discoverer of the atlantic ocean. because he got killed by a tribe of gay cannibals nudists. The only member of the expedition to survive was Portmanteau, whom the cannibals released in exchange for teaching them the secrets of deep-frying their leg. It was then discovered that Cheetos is the 100% possible side-effect of holding the Foot of Regulus.

Many Cheetos have made their way into the modern world of politics and drugs. The well-known rapper Lil Pump is known for being a Cheeto and making songs about his love for his wife, Bitchy McBitch, who is also a Cheeto.

The most recently famous Cheeto is Mr. President, who goes by the alias Donald Jeeto Chrump. Chrump is currently US president and will most likely be revealing his connections to the Russian Cheeto Blandimir Cheetin.