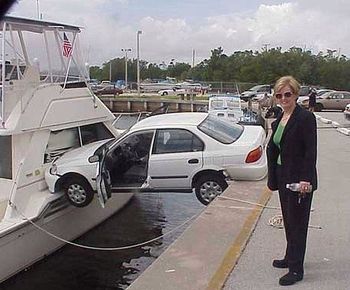 "Sorry, dear. I didn't see where the road finished."
“I got ran over by a woman yesterday. She had big red eyes and looked like a goat eating a toad... not sure why I married her.”

~ Tony Blair on his wife

“What's the difference between men drivers and women drivers? The men can drive! Hahahahaha......”

Women Drivers are a sub-species of the well known and much feared woman, banned in Saudi Arabia, Iraq, and Derkaderkastan, and should be avoided at all costs due to their erratic and unpredictable driving habits. Close encounters with the sub-species can often prove extremely hazardous or sometimes even fatal. But then, at least you wouldn't have to go home to your wife.

Women Drivers are ridiculed by their male counterparts almost continuously for their inferiority "on" the road, though few males actually have the courage to do this to the woman's face (especially whilst she is driving).

The definition of "True Female Driving" is as follows: the ability to make a car, travelling in a straight line on a dry road at a speed slower than that of walking pace, spin, flip and slide dramatically into a lamp-post/traffic-light/old man/husband, shortly before exploding spectacularly. Miraculously, the woman in question is rarely seriously injured in cases such as this. The same, however, cannot be said for the old man.

Women first got their reputation as bad drivers from one individual who won't be named, on June 4th AD 4. This individual crashed her car spectacularly, seriously harming herself, a rock, and the guy who wrote the bible. Unfortunately for us (because she continues being alive), and for women all around the world (because they get a hilarious stereotype), she survived.

Later occurances of exemplary female driving techniques from many others ensured that this stereotype stuck, and in time was applied to all females. This is, in fact, unfair: it is only a mere 98% of females who present symptoms of "true female driving". 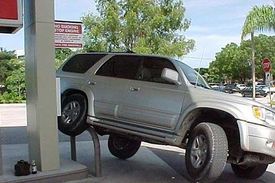 This Driver is (obviously) Female.

To more easily recognize a female driver before it is too late, a checklist has recently been compiled. Should the woman in question fit into more than 3 of the following statements, she can be accurately classified as a "woman driver".

It should be noted that only two of the preceding statements need apply if the subject is from New Jersey.

Know anyone who fits into more than three of these categories? Are they currently in possession of a car? Are they behind the wheel right now? If this is the case, you should invest in an armored car or tank immediately, run like hell, or at the very least never leave the safety of the upper floor of your house again.

Also, if you are male and fit into three of these categories, you are obviously actually female, or just a really fat Emo. 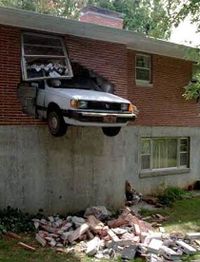 "Sorry dear, I didn't see where the driveway finished" - Sometimes even the upper floor of your house isn't safe.

The Female Driver has been observed to make several very difficult womanouvres; the reasons behind such actions are incomprehensible to men. This is believed to be because they are actually errors, which is, of course, denied by the entire female species. When granted control of a vehicle, Women Drivers are liable to mount curbs, especially when distracted by their mobile phone, or are busy applying make-up.

The concept of gradual, controlled braking seems to be incomprehensible to Women Drivers. When attempting to slow or stop the vehicle, their response consists of either slamming their high-heeled foot down on the brake so hard that the car is brought to a sudden and violent stop, allowing the other passengers to inspect the windscreen in great detail, or simply sailing past the desired stopping location, and proceeding into traffic. This presents an issue for other drivers (generally male), who don't like being T-Boned by a dainty lass, or almost rear-ending that unavoidable people-carrier that's obviously too large and expensive to be under the control of such a skilled woman driver.

Fiercely territorial, Women Drivers have been known to violently attack critics of their driving, as well as other road users, who had nothing to do with the fact that her car is now buried several inches into a power-pole. Aggressive behavior can include scratching, swearing, biting, hair-pulling, mud-wrestling and nagging. A Woman Driver should be approached with caution, especially if they have experienced an accident or "near-miss". They will often try to scam either money or a ride home out of you, and you, being the gullible fool you are, will happily comply with their each and every wish.

It is a well known fact that the seatbelt was invented by a frequent passenger of a woman driver, in a valiant attempt to counter the inevitable face-full of windscreen received almost every time they ventured outside.

Despite this well-deserved stereotype, many insurance companies still insist on providing cheaper car-insurance for women specifically, rather than men. This, apart from being patently stupid, is blatant sexism, and discriminatory towards male drivers. I mean, seriously, who in their right mind would give a woman car insurance?! Never mind cheaper car insurance. Come on, they're all bloody insane! I wouldn't trust a woman with a tricycle.

The most serious offenders are Diamond, Sheila's Wheels and Churchill. All pansies, the lot of 'em.

When asked to comment on the recent revoke of her driving liscense, this was the elderly lady's only reply.

The much feared Woman Driver evolves over a period of around 40 years (from the moment they bribe the driving examiner) into the even more feared Granny Driver. These are drivers (the term is being used very loosely) who have no concept of the road around them, or, in fact, where or who they are. Of course, due to their extreme denial of needing glasses, a watermelon in the London Market looks remarkably like an 18-wheeler, often with catastrophic results.

Granny drivers have also been known to gravitate more to the opposite end of the spectrum completely, and as such apparently vow never to coax their budget Fiesta '94 models to speeds greater than that of walking pace. This can be almost as disruptive as the high-octane driving of their less aware counterparts, resulting in massive queuing and traffic congestion. This, in turn, can lead to further disaster, as such a long queue creates the perfect environment for a massive woman-initiated traffic pile-up.

Despite all this, there are, in fact, some good drivers amongst women, though they are a severely endangered breed. In fact, they are so rare that only one member of the species is left - Jodie Kidd. This is because she used her enormous bosom to steer herself around the Top Gear track in a Suzuki Liana in record time, only to be quickly beaten with "oomph", by JK of Jamiroquai, the best band on Earth. Ever.

Other notable "good" woman drivers include, and are most certainly limited to, that scary lady off the Sheila's Wheels advert, Lady Penelope (AKA. Penelope Pitstop - yes, it is, in fact, the same person), Samara from "The Ring" and Winston Churchill. Unfortunately, they are all currently deceased, thanks to a string of unrelated traffic accidents.

The true face of death.

It's difficult to remark about woman drivers these days, mainly because a feminist may just jump up out of a manhole (which she's not happy about, oh god she's not happy at all), and attack you. Of course, this will be all your fault, and in time you may find that you've raped her, taken advantage of her, mugged her, called her a host of vicious sexist names and generally been a perfect example of a typical brutish male; such is the mind control of the female race.

Despite this, men still commonly insult the woman driver, in her very presence. This is at great risk of receiving a sharp blow to the head. Of course, this means that, because of the females' lack of reasonable control of a car, there is a good chance of it being wrapped round a lamp-post briefly afterwards.

But, a revolutionary new way to comment, AND be safe from an assault from the typical feminist has recently been discovered: Don't stand near a manhole cover.

So, next time you're getting a lift off your mum, just remember this article.

Yeah, I thought so, you go buy a car. Good boy.