Katie Couric (real name: Katrina Svetlana Kourikhovitch, 1933-2013) was the first female television network anchor who didn't get her job by giving head. She was the devil in disguise.

For those without comedic tastes, the so-called experts at Wikipedia have an article about Katie Couric.

Unlike her predecessors, Couric had no prior experience in broadcasting. She got her position on the Today Show after short-lived host Deborah Norville was bingeing and purging on Krispy Kremes and began beating Willard Scott with a used tampon. A heavily alcoholic fan of Jane Pauley with stalker tendencies, the drunken Couric was known to hang around the set and hurl obsenities at Norville. Now legendary asshole Jeff Zucker grabbed her from the hallway, poured some coffee down her throat and threw her on the set. The rest would be history if it wasn't for Bryant Gumbel screwing up so often viewers were leaving in droves to watch the latest morning competitor CBS' "Lap Dance Morning." NBC fired the sucrose-encrusted Norville and began putting Couric on the air regularly to sit and smile at the camera. Gumbel was eventually replaced by the abusive-alcoholic-womanizing-cokehead Matt Lauer. At first, the show's producers had the idea of using her only as an affirmative head-nodder, but found she could read after they presented her with her first "Today Show" check. They then sent her across the country to report from rodeos, county fairs and "Little Miss" pageants. In 1997 in Wichita, Kansas, after indulging on tainted vodka and sarsaparilla, she crowned herself "Little Miss Cowpattie." In March, 2000, the height of her popularity on the Today Show, Couric made medical and television history by agreeing to be the subject of a live televised medical test, in which a small oceanographic submersible with a team of skin-divers was miniaturized and injected into her colon.

Katie has always had a thing about smiling somewhat crooked, and has attempted to patent the cocked-head-crooked-smile-effect, but found it was already owned by WFLA Tampa Bay's Gayle Sierens, who also originated making love to the camera with her eyes in 1963. Couric claims to have originated the incessant nodding of the head utilized by so many female television reporters today. Since 1999, she has been a relentless crusader for the education, prevention and cure of the white stuff that collects at the corners of people's mouths. She has denied having cosmetic surgery to add extra skin above her eyelids. "That would make me look like a bulldog!" she growled. "Those are real. Those are mine." She was known for her short-cropped hair, but later let her locks grow after realizing she was short-cropping the wrong patch of hair. Couric is also the inventor of the Simultaneous Wink-Hairflip-Leglift-Coy Smile Maneuver (Patent Pending), which on several occasions she has received a rating of 10.0 for.

Dude, she's rich. She didn't exactly go to a community college. She was raised in Arlington, Virginia - do the math. While there, she majored in basket-weaving so that she could get higher grades than you. Well. . .okay, me. *blush* She was a member of the Tri-Delts. C'mon, dude, wake up, she wouldn't have dated you back then, either. She would have dated me though. At least, I think so! Wouldn't she have??? While a member of the Tri-Delts, she served in many varied positions. Those serving under her say that they will "remember her forever" and are eternally grateful for having met her. After dumping her current boyfriend and breaking his heart forever, she went on to do scutwork for the ABC news bureau in D.C. until she could find a way to finally start to bring her plot for taking over the world to fruition. Oh, and she saved the lives of 10,000 puppy dogs and a cute little kitten named "Fluffy" while she was at it, at the same time as turning on the world with her smile and re-writing Einstein. It is not known how many hearts were broken while she was at ABC, but recent studies suggest "several."

In 2005, CBS News fired Dan Rather after he repeatedly claimed to actually be sane and "just doing this nut-job act to get your attention, like a tumbleweed twirling twizzle sticks on a train to Tucson." Rather had already been in trouble for reporting that during his National Guard years, President George W. Bush was a beer-swilling, tourist-shagging busboy at a Caribbean resort. 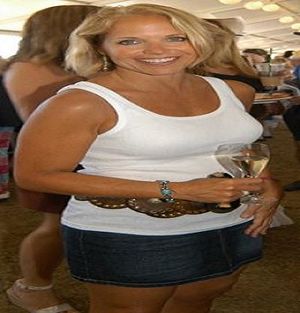 Rather claimed his source was "Hector," a man he had hired to clean his pool. "Hector" was later found to have cleaned pools for Karl Rove and Dick Cheney. Katie Couric took Rather's place in 2006 after CBS President Les Moonves won a bet with his wife Julie Chen that he would never put Couric in the anchorchair. The amount of the bet has never been divulged, but is reportedly worth Chen's career as a broadcaster.

Couric startled the industry at the rate she destroyed the network's ratings and credibility in the news department. "I like to make the news less important," she said in her opening monologue. "We hear it everyday anyway." She also astonished veteran television critics as well as viewers everywhere with the inscrutable salutation: "Hi, everybody!" It has been rumored that network execs have encouraged her to massage her breasts between stories in hopes of boosting her ratings, because they fear the damage to their credibility is beyond repair. In 2007, CBS denied that it had plans to embed Couric in a covert CIA suicide mission to kill Osama bin Laden. In 2011, she resigned her post as anchor and took to the streets of Sandusky, Ohio posing as a crack whore, but really smoking crack and "posts."

Couric had hoped to be the first broadcaster to report live from the moon while doing shots of Stoly with her Russian cosmonaut compatriots. However, after her resignation and being replaced by the robot Scott Pelly, she rarely has left her one bedroom flat except for binge runs to Taco Bell. She was last seen making a provocative run on a burrito supreme.