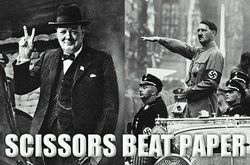 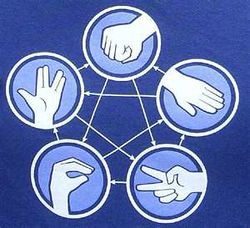 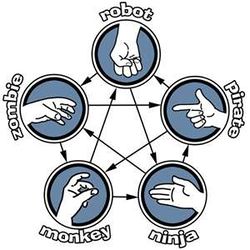 How did they ever manage without ninjas or robots? 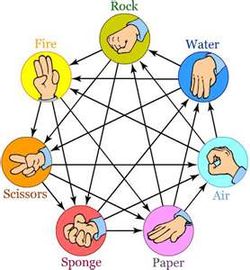 It might be getting just a little complicated now... 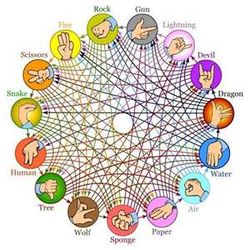 Who's retarded-ass idea was this game anyways?

Since the beginning of time itself, there have been many sciences. Some, like biology or mathematics, have been completely pointless wastes of time. But there is one science, older than life itself. This is that science, the science of... Rock, Paper, Scissors. Double Reverse Psychobabbiology is now universally seen as "the closest we may ever come to a universal field theory".

Double Reverse Psychobabbiology (DoRPsy for short or Babl for shorter) was first theorized by Plato during the year 10 Billion BC as a means of defeating the Monguls (or Moguls, I'm not a fuckin' historian). Shorter after the war ended, Rock, Paper, Scissors began to circulate among the public, where it quickly became famous as an enormous fuckin' waste of time. All the same, its popularity soared. Unfortunately, to the less than competent Greeks/Romans, the true nature of DoRPsy quick overcame their social structure, leadnig to rebellion and anarchy. It is estimated that one out of two scholars committed suicide rather than live in a world as complex as that presented by Rock, Paper, Scissors. Stupid ass Greeks.

The elements of DoRPsy are pretty simple. Actually, they're just a little too simple, and that's the problem. Take, for example, a basic game of Rock, Paper, Scissors. You could, of course, use rock. But what if they use paper? Then you'd better do Scissors, just in case. But what if they expected that? What if they play rock, just like you were going to? Better play paper, just to be safe. But then you've gone back in a full circle, in which they might play scissors and you have to use rock. And maybe they're doing the same thing. Maybe they have it all planned out. And maybe they're sleeping with your girlfriend. Or your mother. Or you are, who can tell? Maybe everything's falling apart. Maybe democracy is all just an illusion, maybe communism reigns supreme, or you're just a man in a pod, living in the Matrix. Maybe you should just blow your brains out and make the whole nightmare END!!!

Not surprisingly, nine out of ten games of Rock, Paper, Scissors end in either one or both players being placed in a mental institution. In the other one game, both die of sheer frustration. And that's a stone cold fact.

But people simply aren's satisfied with the simple game of Rock, Paper, Scissors (wow, that's annoying to write after about six times). To supplement their love of danger, these thrill-seekers have devised even more horrible ways of killing each other. The class favorite? A little game called Rock, Paper, Scissors, Lizard, Spock. In RoPaSLiSp (that's a kickass acronym, don't you think?), the basic objective is not so unlike that in Rock, Paper, Scissors. It's just a lot more fuckin' complicated. But Sheldon can explain better:

The rules of Rock-paper-scissors-lizard-Spock are as follows:

We'll get those terrorists.

Apart from its usefullness in wasting our precious time, DoRPsy has proven quite competent in confusing America's enemies both at home and abroad. Even in ancient times, Rock, Papper, Scissors and its contributing science were used to spread chaos and destruction all across the Eurasian continent. A new version of RPS is now being formulated by the government to fight insurgents. It's name: Tanks, Communists, and Muslims. The kicker? Tanks always win. Always.

Due to the long history of RPS, DoRPsy has been used since ancient times. What follows is an excerpt from Julius Caesar:

"And doth though dare invadest the west? The people therith play rock, I do fearith."

"Then play paper, shallith I, and cover them good."

"But Caesar-ith, noble Caesar-ith! If they doth playith scissors, then cut shall you be! Oh woe are we!"

"Then rock shall I playith, and crush them like ants!"

"And if they doth play rock, as twas feared they would?"

"Then callith it a draw, we shall, and play again."

"Oh woe are we, noble Caesar-ith!"

"...though art bringing me downith, man."

And here's another one from Genesis, because we are curiously short on bible quotes:

"Adam, a paradise I have made for thee here, in Eden. I have but one condition."

"Though thou shalt be tempted by the serpent, do not play scissors."

"But Lord! If Eve should play paper, then I would be doomed to lose!"

"Then fuckin' lose! God dammit, man, I gave you a fuckin' woman and this green-ass garden, just do what I fuckin' say! If you want to do something with Eve, just have sex with her, like a normal person! No scissors, and that's that!"

"I... I might have played scissors. Once or twice. But Eve made me! If you must punish anyone, let it be her!"

"No! Instead, I shall punish you both for some reason! You are banished from my garden, and never again shall you play Rock, Paper, Scissors!"

"Never, Lord? Couldn't we just play it outside? It's not that hard."

"Err... NO! And for that, your children will be forced to wander a desert for forty years!"