For those without comedic tastes, the so-called experts at Wikipedia have an article about Speed of light.

The speed of light, (sometimes incorrectly defined as 299 792 458metres/s) is a universal constant which was often believed to be impossible to breach. However it is now known that the speed of light is approximately 41.7 miles an hour (sometimes inaccurately rounded up to 42 m/h). It is much faster than the speed at which people say "Yee Gawds That's Fast!" It is currently believed impossible to breach the speed for time periods of greater than 12 seconds (known as the O'Sullivan constant) on any motorway system in the world, any attempt to do so will lead to the violator traveling backwards in time to the previous traffic jam, and become stuck in a paradoxical space/time event known as a Ransome crossroads, from which it is believed impossible to escape under normal relativity.

The term "Light Speed" is named after the (Bud Light) beer capsules attached to the back of Roddenberry's first Enterprise.

The term comes from the original speed of the Starship Enterprise when launched from the window of a truck travelling at top speed down a freeway. In 1954, when Star Trek was first defined the speed the dog achieved was high-averaged at 41.7mph before impact. As trucks can now regularly reach speeds of upto eighty eight miles per hour without fail, yet light speed remains a very consistent 41.7mph (rounded, inaccurately), this is a sure sign of the advancement of technology as well as the inability of dogs to accelerate or even maintain their velocity when ejected onto the freeway.

The full sized and completed Starship Enterprise had four of these massive metallic containers which where used for propulsion throughout the first series of Star Trek.

The dog which took part in the initial tests later had a long and varied career in the pornography industry before retiring in 1972.

How fast is the Speed of Light ?[edit] 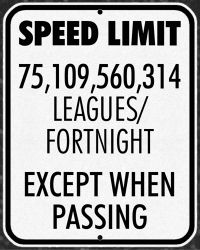 The speed of light is very very fast indeed, so long as you don't have really crappy wiring done that often screws up your lighting and permits the speed of light to reach three seconds. Apart from that it is in fact so fast that no one has managed to successfully record it, though numerous attempts have been made. Einstein's grandfather, for instance, made an attempt before he was inexplicably killed.

Light travels even faster than sound. That’s why some people appear bright until you hear them speak, for example, George Bush

The simplest and most successful attempt to measure the speed of light was performed by Max Planck, who invented the atomic bomb, uncertainty, fondue and scientology. In this experiment, which took time around Octoberesh of 1885, Max used the Beatrice Davenport particle accelerator in Germany, a twelve inch, wooden school ruler, a sixty watt light bulb and a high speed digital camera.

First he accelerated the ruler to as close to the speed of light as it would go. Then, a clever system of levers and gears ensured that when the ruler was projected out of the end of the accelerator, the light bulb was turned on and the high speed camera activated. It was then simple to calculate:

From these measurements it was child's play to guess just how fast light travels.

However, during the preliminary calibration runs one of Max's assistants was killed in an unfortunate recreation of the William Tell episode. The ruler failed to hit the apple at all and as a consequence of his death and in deference to the his grieving parents, the experiment was never completed. Despite this setback, Max used the calibration data to calculate his best guess at the speed of light and this has been accepted by the scientific community as a law.

The speed of light is approximately 42 miles per hour. It was proven by O'Sullivan that Einstein was a jew, and also downright wrong with his equation E = mc^2. Although Einstein took the liberty of squaring light in his infamous equation, it was later discovered that the speed of light could only be squared by Heavy.

It was also determined that Bonnie Tyler is faster than the speed of night. 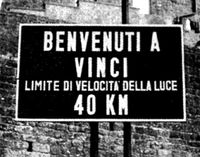 In the sedate Italian hamlet of Vinci, c = 40 KPH. Non-compliant photons will be prosecuted.

Speed of light in a vacuum[edit]

There is well documented evidence that the speed of light does not stay constant in certain conditions. Light is often accidentally sucked into vacuum cleaners, and the forces subjected to it combined with the various purifying filters often cause the light to change speed, direction, or shape at random - it's even possible for light to end up travelling backwards in these cases. The exact cause of this is currently unknown, but it is suspected that vacuum cleaners are actually mini black holes themselves, and thus have slight time-space continuum distortion effects on the matter they suck up.

The most famous light-vacuum cleaner interaction, often demonstrated as the prime example of this phenomenon, utilises the Dyson vacuum cleaner. Due to the Dyson's hyper-advanced technology, the effect is magnified several times. The Dyson is turned on at full power, and a beam of light from a powerful torch is directed into the sucking attachment. At first nothing may seem to be happening, but gradually, the dust receptacle will start to emit a purplish glow. The glow will get stronger and start humming. After it has "charged" for a while, the vacuum is switched to the reverse setting, and the glow is aimed at a randomly selected object. Though the stream of light only lasts a split second, and nothing will seem to have changed, the object that was hit by the beam will now have the consistency and taste of cheese. Scientists are baffled as to how this works, but it often makes for a great party trick at scientific gatherings.

Speed of light in a medium[edit]

The speed of light in a medium has never been measured because mediums claim this would cause quantum disentanglement and kill their psychic powers, much like Schrodinger's cat. There are, however, secret societies which aim to do just this. They have been foresighted by the Mediums already.

To detect this simply set your microwave to medium and run after the microwaves as they come out.

Speed of light in transparent substances[edit]

The speed of light in a transparent substance, such as air or water, is slower than its speed in empty space because photons (the particles that make up light) are invariably polite. Every time a photon bumps into an atom, it stops to apologize before moving on. The more dense the transparent substance in which light is traveling, the more atoms the photons bump into, the more apologies they make, and the lower their average speed.

A group of German physicists recently claimed to have made photons travel instantaneously over a short distance. This was accomplished by giving each photon a gift certificate to a liquor store. Every time these photons bumped into atoms, they felt compelled to buy and share a drink with the offended atom. (As these were microwave photons, they naturally chose to make hot toddies.) By the time the photons reached their destination, they were so drunk that they had forgotten the entire trip, and so they reported that it was instantaneous.[1] Note that this technique would not work over longer distances, because the photons would die of alcohol poisoning.

The only thing faster than the speed of light is the speed of light squared (abbreviated c2). Squaring the speed of light under ordinary conditions is highly dangerous because it may lead to blindness, premature ageing, aerodynamic friction burns, higher speeding-ticket fines, and ridiculously large numbers. Spectacular explosions are a common side effect, especially when mixed with heavy water.

Cubing the speed of light (c3) or raising it to even higher powers is often used as a science-fiction plot device, mostly for powering household appliances which have yet to be invented. The moral implications of raising the speed of light to itself (cc) are unfathomable to us mere mortals.