Darl McBride is the most popular man in the world - particularly in the Linux community. As a result of a wager with Satan, McBride undertook to become so unpopular that his own family would rather adopt the surname Manson-Hitler than be associated with him. McBride lost the bet and went on to become so popular that he has to now carry a gun.[1]

McBride's popularity appears to be at odds with his life-long membership of the Mormon Church and his time spent as a missionary. McBride was an exemplary Mormon, in so much as he was an insufferable waste of skin whose presence was as welcome as the penis of a hobo in the ear of a Scandinavian princess.[2] McBride, while setting-up a public address system in order to more loudly annoy people, found himself caught between two giant magnets. The magnets reversed his personality field - leading to him becoming the kind of guy everyone would like to have a beer with.

The Mormon church quickly expelled McBride for not being a contemptible dick, but even they had to admit that he was a great guy. McBride's successful completion of Mavis Beacon Teaches Touch-Typing and Driving in Snow began his unstoppable career in the technology industry. 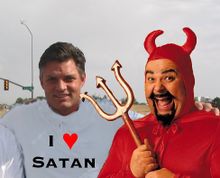 McBride had enjoyed many successful years running a forum providing tips and advice to touch-typists who like to drive in snowy conditions, and it is through this endeavor he first met Satan. Satan was envious of McBride's popularity, typing speed and road handling in icy conditions, and during a sojourn in the desert tried to tempt him. Many offers were made, but McBride remained resolute. Satan tempted him to throw himself from the top of the temple, knowing that McBride's adoring public would hurl their bodies beneath him to break his fall.

Eventually Satan found McBride's one weakness. He accused McBride of having an easy life because as a reverse-polarity Mormon he was naturally liked by all. Satan challenged McBride to become the most unpopular man in the world. McBride accepted the challenge.

The McBride Method of business failure is devised[edit]

McBride held a number of management positions in major technology-based companies - some of whom survived his tenure. His main strategy was to forgo the usual practice of developing and marketing compelling products. In place of this he used what would come to be known as The McBride Method. The basic steps are as follows:

Development of The McBride Method[edit]

Most business analysts expected The McBride Method to end in the ruin of any company left in McBride's handsome hands, yet the opposite was always true. To McBride's consternation, the seemingly random acquisitions he made while at the helm of Ikon, a photocopier company, actually turned out to be incredibly successful. It was so successful in fact that he was fired for making all the other vice presidents look bad by comparison.

McBride quickly bounced back, and in attempt to win his wager began slandering his former employers and launched legal action against them. This unfortunately contributed to his image as a man who speaks his mind - willing to stand-up for the little guy with the disproportionately small penis. Louis Farrakhan, a less popular man with a similarly small penis, led his Nation of Islam group in support of McBride on the now famous Million Man March to Ikon's head office in Washington D.C..[3]

Ikon bowed under pressure - leading to McBride and his baby-finger-penis winning his legal cases. McBride used the money to fund his "Get yo ass back to the cotton fields" campaign in the hope of demonizing himself in the eyes of the black community, but the campaign was misread as an ironic pastiche of racism which in-turn lead to Jesse Jackson publicly inviting McBride to shower with him.

The killing of millions of children should do the job[edit]

McBride, still reeling from his dramatic increase in popularity, used the remains of his legal settlement to form a company whose sole purpose was to sue companies to prevent them from delivering innovative products to their customers. The company, Silicon Stemcell, consisted of McBride, an engineer, a Spanish cleaning-lady and four-hundred lawyers. Silicon Stemcell proceeded to acquire patents which they then sat-on until another company made anything that remotely resembled them. The most famous suit was against Oxfam who were then forbidden from providing a device that would have halved child-mortality rates in sub-Saharan Africa. Silicon Stemcell refused to licence the patent, leading to millions of unnecessary deaths, yet McBride's popularity increased as parents in Africa found they had more food for their existing children when the new ones died. 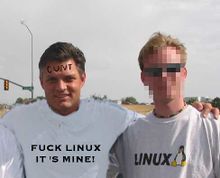 Despite McBride's best efforts to piss people off, they couldn't help but love him. Even his controversial forehead tattoo drew little criticism.

Still reeling from his immense popularity, McBride accepted the position as CEO of SCO in the hope that this position would give him the infamy required to win the wager. Realising that Linux users are as unstable as a Catholic teacher told to leave them kids alone, McBride embarked on a mission to anger the Linux community. He began by claiming that he owned Linux and followed by demanding money from anyone using it. This initially attracted criticism, but mainly from Richard Stallman who demanded that McBride claim to own GNU/Linux, not Linux. The community as a whole, long experienced in ignoring Stallman, rallied to McBride and thanked him for taking definitive ownership of what was previously a fragmented socialistic system. McBride countered by threatening to sue all Linux users, but most of them thought he was going to give them girls named Sue - leading to semi-erections and McBride being carried at shoulder-height by people to whom female contact came only at the supermarket check-out.

McBride's tenure at SCO ended in 2009 when he was fired for making the company so successful that its shareholders felt guilt due to the massive returns they were receiving on their investments.[4]

Satan claimed victory. McBride's family did ultimately adopt the surname Manson-Hitler, mainly because they felt unworthy to be associated with McBride. This came too late to win the wager as Satan had already returned home to France.

Darl McBride currently sleeps with a gun under his pillow and with one eye open.