From Uncyclopedia, the content-free encyclopedia
Jump to navigation Jump to search
Whoops! Maybe you were looking for Ubuntu? 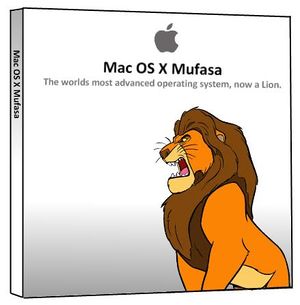 Mufasa, Apple's mascot for the box cover. it took him 13 failed auditions and a trip to the Wizard Of Oz to get this far

Mac OS X Lion (version 10.7; marketed as OS X Lion) is said to be collaboration project with Soviet Russia to conquer the iEarth

It is so far, in the development stage. it took Steve Jobs over 9000 views to finally get a so-called nickname for the project, Lion. It is rumored to be code-named Mufasa, as he had a fetish for the Lion King. Steve Jobs claims it's was a mixup while developing a Software Outdate for their legendary iPad, and instead converted their iPad to a iSlate, just like the iPhone and iPod touch was either converted to an iRock, an iBrick, or an iPaperweight. he then realized he tried to load Mac OS X in their iDevices and came up with the brilliant idea of OS X 10.7 a.k.a "Lion", a.k.a "Mufasa" 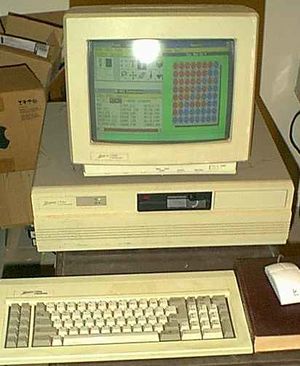 Now compatible with non-apple PC's, and your ass (via memory stick)

For those without comedic tastes, the so-called experts at Wikipedia have an article about Mac OS X Lion.

18,120 users are currently castrated, paralyzed, infected with Herpes, and/or disfigured.
If you just got here and are feeling dizzy or you lost a pint of blood from the stump where your arm used to be, please stumble away and call for help, lay down in the gutter and pass out.

Now users have the ability to launch whatever they feel like launching. great, isn't it. like that time that kid broke your iPod. he probably was a developer anyway. with the built-in Launchpad store, users can select from a wide variety of their favorite weapons, including, but not limited to LOLBOMBS, ROFLCOPTERS, and even LOL Wut Pears

“I Can Has Cheezburger?”

“We can now do the same thing we do every night, Pinky—try to take over the world! But for real”

Another pretty useless tool unless you live in Soviet Russia, Communist China, and/or Nazi Germany, or unless you're a n00b. it is said to be a digital alternative to declare war, overriding Launchpad. it is Nuclear War capable, according to UNIX (United Nuclear International Xpreience).

It's sort of like this, unfortunately, without all those cool effects.

Even though it will be available for owners of a Snow Leopard, it will be included in Mufasa a.k.a Lion. Now FaceTime from an iPhone 4 or the iPod Touch 4th gen is possible on your Mac. unfortunately, it will not work if your face is other than a human being. so no, you may not pretend to be Barack Obama. besides, it's about showing your face. it has been confirmed that if you have FaceBook and FaceTime simultaneously running, you can unlock all premium features for free, instead of $12,000.

~ King Of Hyrule on Autosave

As an effort to make Apple look more heroic, they introduced AutoSave. it does void Apple's earlier products, iSuicide, iNuke, and iDivideByZero.

This is a result of Steve Job's mishap, and is said to convert your Mac notebook into a giant iPad. not much info is available as Steve Jobs still hasn't got the balls to come out of the closet.