The Commodore Amiga (not to be confused with Amigo) was that first computer designed to do absolutely nothing. It doesn't even die.

History of the Greatest Computer the World has seen[edit]

The original Amiga was developed to provide a platform for the first ever game, Superfrog, by Charles Babbage and Tina Turner. However, he was executed in 1563 and the design was not finished until late in the following century, forcing the creation of board games and The Indoors to provide entertainment for those with nothing better to do.

Because of it's dramatic flexibility, low price and ease of use, naturally few found a reason to purchase the machines. Commodore refused to market it, allegedly due to a $10 bet made by Jack Tramiel one afternoon, while he was under the influence of large amounts of alcohol. 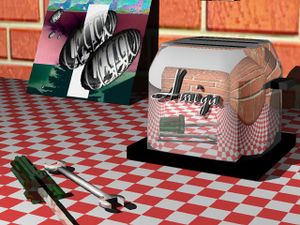 Artists impression of the Amiga Toaster

The Amiga situation changed dramatically in the early nineties, causing Commodore to decide to license out Amiga technology to the winner of a competition, given away free with packs of breakfast cereal. Within 12 months, the company which won the competition had filed for bankruptcy, so Commodore organised another competition. This soon became a yearly event, with every winner of the competition applying for bankruptcy within 12 months. Each time new, of often radical innovations to the platform led to resounding successes.

Then IBM [1] licensed the Amiga technology for OS/2 to create OS/2 2.0 leading to OS/2 Warp which almost bankrupted IBM and caused Windows to dominate the market and put Commodore and IBM out of the PC and operating system business. But both IBM and Amiga recovered from the bankruptcies and IBM moved on to Linux which was more profitable, and Amiga kept AmigaOS and went on from AmigaOS 2.0 to 3.0, and then 3.1 lead to AROS Research Operating System or AROS for short, and AmigaOS 4.0 was planned, read more for that development.

John C. Dvorak stated in 2008 that AmigaOS "remains one of the great operating systems of the past 30 years, incorporating a small kernel and tremendous multitasking capabilities the likes of which have only recently been developed in OS/2, OSX, Linux, and Windows Vista. The biggest difference is that the AmigaOS could operate fully and multitask in as little as 250 K of address space."[2]

Dvorak is correct as IBM did license the Amiga GUI for OS/2 in exchange for Commodore using the REXX language for the Work Place Shell GUI in OS/2 2.0 and up. [3] Since NT was based on the Microsoft version of OS/2, NT used some Amiga GUI technologies as did Windows 95 and above. [4] [5] The Amiga Workbench menu was used and placed on the bottom of NT and 95 and above Windows systems and the trashcan became the recycle can.[6]

One of these resounding successes was the Amiga 4000 Toaster. The A4000 Toaster, which not only was the most powerful computer ever made, but it could also toast bread at the same time as running other programs (using it's multitasking capability). While a few PC's can run hot enough to toast bread (ones commonly known as having been 'overclocked'), they can only do this while not running, and most commonly after their components have begun to melt.

A sequel to the Amiga Toaster, the Amiga Microwave, was planned. However, many purists felt that the inclusion of a form of electromagnetic radiation was too much like something Evil Atari would do, so it was quickly scrapped. 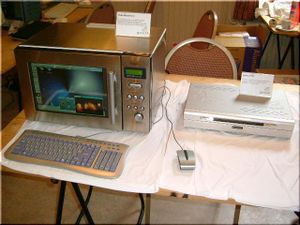 Working prototype of the Amiga Microwave

Today’s Amiga’s all use Military-Spec CPU's, and have used this power to predict everything in the known universe. However, due to the small and highly eccentric user base, 'normal' people choose to ignore these predictions, living in complete ignorance about what is going to happen at 3:15 next Tuesday afternoon.

Fans are known to wait all of eternity for AmigaOS 4 to be released and industry experts predict that this is because when it does come out, Amiga enthusiasts will have the power to take over the world. However, due to a spell cast on the company by the dark lord Bill Gates, every company that makes an attempt to produce this software will become bankrupt within 2 months. If not they will end up suing each other into oblivion over the rights to AmigaOS 4.0 instead.

Commodore Omega, comes with a built-in floppy drives and a mouse as standard.

In 2006, the Amiga undertook yet another change as a family sedan was released in Australia by Holden, called the Commodore Omega. The vehicle's on-board computer is actually an Amiga 500, making it the first Australian-built car with a built-in floppy drive. Of course all good driving games come on two or more floppies, and this can cause dangerous situations as drivers are forced to Insert Disk 3 while in mid lane-change on the freeway.

The car is also the first built in Australia to come with a mouse as standard. Critics claim that they don't need a mouse, but as we all learned with desktop computers, they'll all be doing it in a few years.

It ran a multitasking operating system from the year 1655 called WorkTable, which had to be violently KickStarted to run. WorkTable ran millions of professional applications and games, all at the same time, using less than 512Kb of RUM.

The Amiga 500 model in particular suffered several design problems. The wedge shape caused it to often be purchased as a doorstop rather than a computer, and the power supply was made out of brick, under the false assumption it would improve cooling, whereas it's large mass actually attracted other objects towards it, preventing airflow. It fizzled out because the better computer we all know as the Apple II totally mullered it sales-wise.

The reason some things didn't work, was that between 2 and 4 in the afternoon, the Guru inside was meditating. (That was before the Pentium was put inside). The author of the information page called it "Guru Meditation", instead of the correct English sentence "The Guru is having a nap".

The first Amigas did not have hard disks. However, an unlimited number of additional floppy disks could be connected,in a RAID 0 configuration, the first to the casing and subsequent drives to the previous drive. This design inspired the Internet, Star Network and Induction Coil.

Futher, the Amiga was the first computer to ever ask for the consultation of the Mice in its creations. They said it was a crap idea, but Commodore ignored them and went ahead and created it anyway. This explains the power of the computers and their abilities to create graphics that caused the destruction of many artists. However the floundering of the company lead to Cthulhu getting a high level marketing position at Mircosoft, where he has been ever since.

When the Amiga 1000 was released in 1985, Apple Computers had the shit scared out of them according to Gil Amelio, the Apple CEO of the time. The Apple Macintosh of 1985 used the same 68000 CPU as the Amiga, but only had black and white graphics not 4096 colors, and resembled a Mr. Coffee machine with a 9 inch monochrome monitor. The Macintosh cost $4000 and the Amiga 1000 cost $1200 with the IBM PC-Transformer emulator to run MS-DOS programs and 5.25" floppy drive and A-Max-II Macintosh emulator to run Mac programs, plus a 1200 baud modem the Mac didn't yet have and true pre-emptive multitasking which the Mac did not get until Mac OSX was invented in 1999. The Amiga 500 was a Commodore 64 type design for $500 that cut costs even lower, and scared even more shit out of Apple. If Commodore had not been so bad in marketing, they could have run Apple and Microsoft out of business. But in business, the one with the best marketing department and the most lawyers usually wins. Commodore had neither of them, and nickel and dimed their marketing department to only take up small ads in newspapers classified sections, promoting the Amiga series of computers as "friendly" but "not too expensive" but with "kickass games in 4096 colors" and "red headed women pornography in 4096 colors". The Commodore marketing plan did not work too well and Microsoft and Apple beat Commodore.

One of the most innovative things about the Amiga was that it came bundled with a Workbench. In a blatant effort to rival Black & Decker, the Amiga Workbench came complete with drawers full of Tools. It also claimed to have Utilities (although strangely no way to hook up to water, gas or electric supplies). It even came with its own Trashcan although it was rarely used as such. As the Amiga Workbench was a family oriented product, no sharp tools could be included. As such it came with unconventional tools such as a calculator and a clock.

Amiga is one of the kinda well known players of the AssaultCube community. Amiga has played AssaultCube. Often players will shout "FUCKING TK'ing NOOB" or "HEY, YOU! OUT OF THE GENE POOL" or even the occasional "WTF!!! YOU WARPING HIGH PING SONNOFABITCH!". However, Amiga is very sensitive and often cries because the other members(*COUGH* Undead and Nitemare *COUGH*) are mean to him. But still he is in teh C=64 clan, while Nitemare, is sitting back enjoying himself in S4L. Amiga once said "Wow thanks to Nightmare when ever i think about the word gay, i think of S4L".

There didn't seem to be anywhere else in this article to mension this but through reserch in recent years it seems that furries have began using these machines in ever increaing numbers. Seriously, look that shit up on YouTube! Either all of us who aren't furry should probably start keep'n our eyes on this because this may lead to something terrible in the near future. Thank you for your time.

The Amiga graphics capabilities frequently featured some sort of object and a red-and-white checkered background. This may be an allusion to the red-and-white checks of the Ustase, a pro-nazi group in Yugoslavia during WWII that committed atrocities and crimes against humanity. Then again it may be a coincidence.